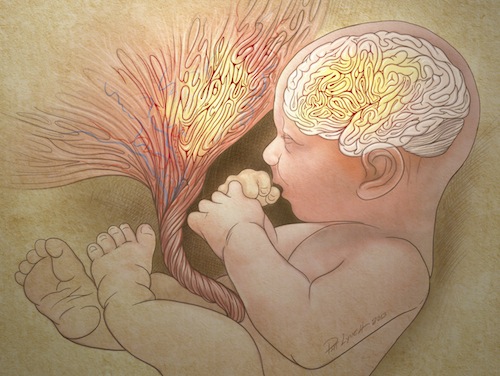 After most pregnancies, the placenta is thrown out, having done its job of nourishing and supporting the developing baby.

But a new study raises the possibility that analyzing the placenta after birth may provide clues to a child’s risk for developing autism. The study, which analyzed placentas from 217 births, found that in families at high genetic risk for having an autistic child, placentas were significantly more likely to have abnormal folds and creases.

“It’s quite stark,” said Dr. Cheryl K. Walker, an obstetrician-gynecologist at the Mind Institute at the University of California, Davis, and a co-author of the study, published in the journal Biological Psychiatry. “Placentas from babies at risk for autism, clearly there’s something quite different about them.”

Researchers will not know until at least next year how many of the children, who are between 2 and 5, whose placentas were studied will be found to have autism. Experts said, however, that if researchers find that children with autism had more placental folds, called trophoblast inclusions, visible after birth, the condition could become an early indicator or biomarker for babies at high risk for the disorder.

“It would be really exciting to have a real biomarker and especially one that you can get at birth,” said Dr. Tara Wenger, a researcher at the Center for Autism Research at Children’s Hospital of Philadelphia, who was not involved in the study.

The research potentially marks a new frontier, not only for autism, but also for the significance of the placenta, long considered an after-birth afterthought. Now, only 10 percent to 15 percent of placentas are analyzed, usually after pregnancy complications or a newborn’s death.

Dr. Harvey J. Kliman, a research scientist at the Yale School of Medicine and lead author of the study, said the placenta had typically been given such little respect in the medical community that wanting to study it was considered equivalent to someone in the Navy wanting to scrub ships’ toilets with a toothbrush. But he became fascinated with placentas and noticed that inclusions often occurred with births involving problematic outcomes, usually genetic disorders.

He also noticed that “the more trophoblast inclusions you have, the more severe the abnormality.” In 2006, Dr. Kliman and colleagues published research involving 13 children with autism, finding that their placentas were three times as likely to have inclusions. The new study began when Dr. Kliman, looking for more placentas, contacted the Mind Institute, which is conducting an extensive study, called Marbles, examining potential causes of autism.

“This person came out of the woodwork and said, ‘I want to study trophoblastic inclusions,’ ” Dr. Walker recalled. “Now I’m fairly intelligent and have been an obstetrician for years and I had never heard of them.”

Dr. Walker said she concluded that while “this sounds like a very smart person with a very intriguing hypothesis, I don’t know him and I don’t know how much I trust him.” So she sent him Milky Way bar-size sections of 217 placentas and let him think they all came from babies considered at high risk for autism because an older sibling had the disorder. Only after Dr. Kliman had counted each placenta’s inclusions did she tell him that only 117 placentas came from at-risk babies; the other 100 came from babies with low autism risk.

Dr. Walker said that typically between 2 percent and 7 percent of at-risk babies develop autism, and 20 percent to 25 percent have either autism or another developmental delay. She said she is seeing some autism and non-autism diagnoses among the 117 at-risk children in the study, but does not yet know how those cases match with placental inclusions.

Dr. Jonathan L. Hecht, associate professor of pathology at Harvard Medical School, said the study was intriguing and “probably true if it finds an association between these trophoblast inclusions and autism.” But he said that inclusions were the placenta’s way of responding to many kinds of stress, so they might turn out not to be specific enough to predict autism.

Dr. Kliman calls inclusions a “check-engine light, a marker of: something’s wrong, but I don’t know what it is.”

That’s how Chris Mann Sullivan sees it, too. Dr. Sullivan, a behavioral analyst in Morrisville, N.C., was not in the study, but sent her placenta to Dr. Kliman after her daughter Dania, now 3, was born. He found five inclusions. Dr. Sullivan began intensive one-on-one therapy with Dania, who has not been given a diagnosis of autism, but has some relatively mild difficulties.

“What would have happened if I did absolutely nothing, I’m not sure,” Dr. Sullivan said. “I think it’s a great way for parents to say, ‘O.K., we have some risk factors; we’re not going to ignore it.’ ”

As the number of children with autism has risen dramatically over the past couple of decades, experts have learned that the earlier a child gets diagnosed, the earlier specialized therapy can be initiated, which can significantly improve outcomes.

Now researchers have been able to show that a particular type of behavioral therapy called the Early Start Denver Model (ESDM) not only improves autism symptoms, but actually normalizes brain activity and improves social behavior.

Autism is a neurodevelopmental disorder that starts to become very apparent around age 3. The main signs and symptoms of autism involve communication, social interactions and repetitive behaviors. According to the latest statistics from the U.S. Centers for Disease Control and Prevention, one in 88 children currently is diagnosed with autism, including one in 54 boys.

“Early intervention alters the trajectory of the brain and social development in children with autism,” says Geraldine Dawson, the lead study author who developed the ESDM therapy along with study co-author Sally Rogers.

ESDM therapy uses teaching methods from ABA ,or applied behavioral analysis, the traditional one-on-one interaction between a child and the therapist.

But rather than sitting at a desk next to the child — where a teacher or therapist breaks down complex tasks into small components and gives tangible reinforcements — children receiving ESDM are sitting on the floor, playing with their therapist or parents.

It can be done just about anywhere, and Dawson says the play-based method of engaging a child helps him or her develop a social relationship.

The study began with 48 children in Seattle and Sacramento, California, who were between who were between 1 1/2 and 2 1/2 years old. Half of the children received a total of 20 hours of ESDM therapy over five days a week.

But since parents can be taught the methods in just a few hours, they could engage their children using the ESDM method as well. The other half of the toddlers received community-based interventions, which included in some individual therapist sessions and some day care-based sessions. The number of hours spent with therapists was the same in both groups.

Three years ago, Rogers and Dawson published their first findings from this study and found that children receiving ESDM therapy increased their IQ and language skills three times more than children in the community-intervention group.

That in itself was “very significant,” says Dr. Thomas Insel, director of the National Institute of Mental Health, because it proved that early detection and intervention leads to improved outcomes.

In their latest study, published Friday in the Journal of the American Academy of Child & Adolescent Psychiatry, Rogers and Dawson show what parts of a child’s brain are active after two years of therapy, compared to typically developing children, using an EEG (electroencephalogram). In an EEG, electrical activity in different parts of the brain is measured using electrodes that attached to the child’s head.

“If the child wiggles too much, the data is not interpretable,” says Dawson.

In the end, researchers could only get 60% of the children to sit still enough to get usable EEG results, she says, but that was true in both the group of children with autism and those without.

Technicians measuring the brain activity had no idea which children had autism and which did not.

“Children who received ESDM now showed a normal (brain) response, identical to typical 4-year-olds,” Dawson tells CNN. That wasn’t the case with most children who didn’t have ESDM therapy.

Babies are naturally drawn to people and faces, and their brains show greater responses when they look at a face, compared to an object or a toy, Dawson says.

Insel says this study shows that the ESDM form of therapy “not only changes behavior, it changes the brain.”

The exact cause, or more precisely causes, of autism are unknown and there is no cure.

Parents and pediatricians are urged to look for early signs of autism including: little or no eye contact, lack of or delay of spoken language, repetitive use of language and behaviors and persistent fixation on parts of objects.

Since 2007, the American Academy of Pediatrics recommends that pediatricians screen 18- and 24-month-old toddlers for signs of autism.

When something is wrong in the brain — not just in autism, but also in diseases like Alzheimer’s and Parkinson’s — what’s causing the disease is occurring much earlier than when symptoms appear, Insel explains.

Based on the new findings, perhaps using EEGs to measure this type of brain activity could be a biomarker for autism, he says. A biomarker is a distinct characteristic that indicates a particular condition.

Measuring a baby’s brain activity as early as 3 and 6 months could identify changes in the brain before changes in behavior are noticed, he says, and therapy could begin even earlier.

The ESDM model could be applied as early as 12 months, say Dawson and Rogers.

More research will probably have to be done to confirm the biomarker. So until there is a definitive test for diagnosing autism, Dawson says this it’s even more important that pediatricians screen children for autism as early as possible.

“The average age of diagnosis is still 4 and 5 and even older in minority groups,” she says. “We really need to close the gap.”

Autism Speaks has many tools on its website to help parents see what a child with autism looks like compared to a typically developing child. There are also many tool kits to help families of children with autism.