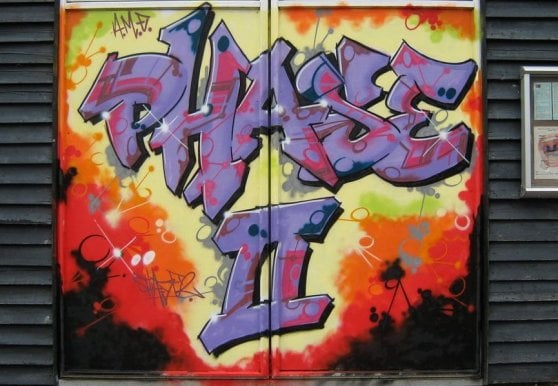 Pioneering aerosol writer Lonny Wood, better known by his moniker, Phase 2, has died. He is remembered for his invaluable, media-spanning contributions to hip-hop and is acknowledged as the first artist to perfect the “softie” style of aerosol calligraphy, characterized by its marshmallow-like bubbled lettering.

Born in the Bronx, New York, Phase 2 began tagging subway trains in the early 1970s, becoming one of the most widely emulated stylists of that moment. As his work matured, he progressively abstracted and complicated his calligraphy, “deconstructing the letter”—in the words of hip-hop journalist Jeff Chang—“into hard lines, third eyes, horns, drills, spikes, arches, Egyptian pharos and dogs, pure geometrics.” Phase 2 was an early member of United Graffiti Artists (UGA), a collective of train painters credited with mounting the first gallery show of so-called graffiti art, a term Wood rejected for devaluing and criminalizing his work and that of his peers.

In addition to his calligraphic work, Phase 2 rapped, DJ’ed, and was a member of the New York City Breakers, a pioneering break-dancing crew. As a graphic artist, he lent his hard-edge geometric style—influenced by the Bronx’s many Art Deco theaters—to flyers promoting significant parties and shows like 1982’s Kool Lady Blue at the Roxy nightclub in Chelsea, which established a rapport between hip-hop and New York’s contemporaneous punk and New Wave scenes. In the mid-’80s, he served as the art director of the underground zine International Graffiti Times, often cited as the first publication devoted to street and subway art. In 1996, he and International Graffiti Times editor David Schmidlapp copublished the book Style: Writing from the Underground, a history of aerosol art. In recent decades, his work has been featured in numerous exhibitions of urban art.

“I’m absorbing and devouring language,” Phase 2 said of his work “and creating something else with it. . . . The English language isn’t much, especially in its current state. By comparison (to Chinese and Japanese) it’s like a dot. Why not go beyond that and just create an alphabet or language? You can’t put a limit on communication or how one can communicate, you’ve always got to look further, that’s how style expanded in the first place.”