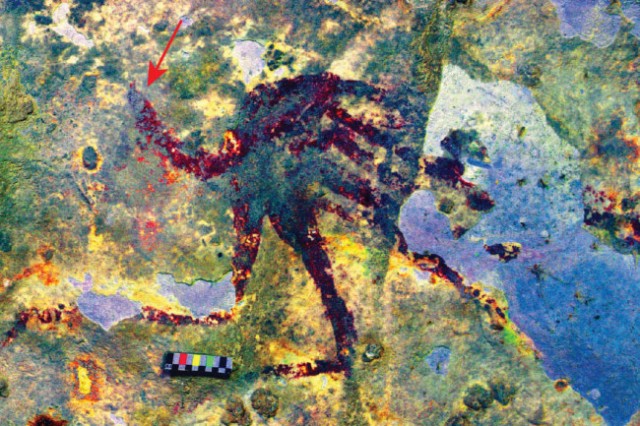 On the walls of a cave in southern Sulawesi, a humanoid figure about five inches wide hovers over the head of a warty pig, its arms connected to a long, spindly object. This figure, interpreted as a hunter in a 44,000-year-old mural, appears to have a stubby tail.

AN INDONESIAN SPELUNKER named Hamrullah was exploring the grounds of a concrete plant on the island of Sulawesi in 2017 when he spotted the unassuming hole in the limestone high above his head. Without a second thought, he shimmied up the rock and tucked himself into the mouth of a small cave, where he clambered through the tunnel’s cool, musty air. He hit the back wall and saw a mural spread out across eight feet of flaking rock, so he pulled out his phone and began snapping pictures.

The painting, described today in the journal Nature, depicts two pigs and four small-bodied relatives of water buffalo, as well as what appear to be eight humanoid figures that are two to four inches tall. Some of the human figures are holding long, spindly objects pointed toward the animals that might be ropes or spears.

The rock art panel extends some eight feet across the back wall of Leang Bulu’ Sipong 4, one of the many caves in Sulawesi’s Maros-Pangkep region.
IMAGE BY ADAM BRUMM

Whether the art depicts a hunt or some other event, it’s likely the oldest known story told through pictures, the researchers say. The mural dates back at least 44,000 years, which makes it about twice as old as most similar cave-art scenes in Europe, such as a 19,000-year-old French mural of a bison charging a bird-headed man. The discovery adds to a growing body of ancient art known in Southeast Asia that changes some long-standing ideas about when and where humans started showing our defining cognitive traits.

“When you do an archaeological excavation, you usually find what people left behind, their trash. But when you look at rock art, it’s not rubbish—it seems like a message, we can feel a connection to it,” says lead study author Maxime Aubert, an archaeologist and geochemist at Australia’s Griffith University.

“Now we’re starting to date it, not just in Europe but in Southeast Asia, and we see that it completely changes the picture of our human journey.”

The mural is the latest major artistic work found in the caves of Sulawesi’s Maros-Pangkep region. Millions of years ago, underground rivers had cut through the limestone here to form a maze of caverns, many of which contain hand stencils and other paintings made by the humans who called the island home tens of thousands of years ago.

Since the 1950s, scholars have documented more than 240 cave art sites on Sulawesi, but for decades, these paintings were assumed to be no older than about 12,000 years. That started to change in 2014, when a team including Aubert and Brumm began finding cave paintings in Indonesia that were at least 40,000 years old, making them at least as old as Europe’s famed cave-art sites, if not older.

“Europe was once thought of as a ‘finishing school’ for humanity, because France in particular was the subject of intense research early on … so for a long time the European rock art record really set the tone for what we expected to see,” University of Victoria archaeologist April Nowell, who wasn’t involved with the research, says in an email. “We have long known this view of Europe as a ‘finishing school’ is no longer tenable, and the richness of the finds from Australia and Indonesia continue to underscore this point.”

The mural is globally significant, says Peter Veth, a University of Western Australia archaeologist who reviewed drafts of the study: “As with the early dates of people voyaging across the sea to Australia and engaging in highly complex art, here we have [Southeast] Asian Indigenes showing human-animal relations before sapiens even got to Europe.”

How do researchers tell the age of a cave painting? One method provides an indirect estimate by revealing when minerals started growing over the finished art. These minerals naturally include trace amounts of radioactive uranium, which decays into thorium at a predictable pace. The older the deposit, the more thorium it’ll have relative to uranium.

For the newfound mural, Aubert and Brumm’s team sampled deposits that grew over parts of the painting and found that the minerals started forming between 35,100 and 43,900 years ago. Since it’s possible that the mural was made even earlier, the researchers are treating these dates as minimums. And because the team thinks that the mural was done in one fell swoop, they are using the oldest date—43,900 years—as the whole mural’s minimum age.

Aubert is confident these dates will hold. For one, the team sampled minerals that clearly formed over the painting’s pigment layer and so were assuredly younger than the painting. The samples don’t seem to have leached uranium over time, which nixes a possible source of error. It’s also clear that Sulawesi’s ancient residents had developed artistic chops; a nearby excavation led by Brumm found 30,000-year-old “crayons” and pieces of jewelry.

Elisabeth Culley, an archaeologist at Arizona State University who specializes in cave art, agrees that the Sulawesi painting is at least as old as the paintings in France’s Chauvet Cave, which date to between 30,000 and 32,000 years ago. She also agrees that the artwork represents a proper scene.

“I don’t think the interpretation is controversial,” she says. “The figures are oriented toward each other, [and] it’s not simply dynamic—there does seem to be some motion.”

But the new mural has more contentious elements for scientists to ponder. The humanoid figures bear unusual features, including one with a stubby tail and another with a birdlike beak. As part of their paper, Aubert’s team claims that the figures might be the oldest human-animal hybrids ever found in a work of art. The oldest accepted one, a lion-headed male figurine, was carved from mammoth ivory in what’s now Germany 39,000 to 40,000 years ago.

If the painting’s figures do in fact blend the human and the non-human, they suggest that the artist behind them could think abstractly and creatively. It’s even possible that the figures hint at an early spirituality or express shamanic beliefs.

“Maybe early people at that time, to them, they saw themselves as an indivisible part of the animal world,” says study coauthor Adam Brumm, an archaeologist at Griffith University. “This special bond between humans and animals was so strong that culturally and philosophically, they might have seen themselves as part-animal, part-human, for all we know.”

Nowell agrees that the artwork might depict an abstract hunting scene: “Given that some of the human-like figures appear to have a tail or beak suggests that it is not a straightforward hunting scene, that there is some mythological quality to it,” she says. Culley also agrees that the artwork is meant to be abstract, since the painting’s humanoid figures are unrealistically tiny. But precisely because it’s abstract, Culley says, the painting could support many interpretations beyond a hunting scene. Perhaps the putative spears are shamanistic “power lines” meant to show energy moving from one object to another.

Regardless of the specifics, Culley says that the scene’s true importance lies in the artist’s attempt at abstraction—a trait that also pops up in France more than 30,000 years ago.

“There’s huge variation in [the two] cultures, there’s a lot of space dividing these traditions … but they’re also very consistent,” she says. “That, to me, is the real take-home: They’re contemporaneous with a very, very similar tradition, which must have some shared origin.”

Now that researchers have described the painting, they’re racing to find and document more. Hamrullah, who is a study coauthor, and the team’s other Indonesian members routinely find more as-yet unexplored caves as they survey the region. The team is also trying to chart a future for this mural’s cave site. It’s unclear precisely why, but the newfound art has recently started flaking off the cave wall at an accelerating pace.

The bustle of activity around the site may play a role. While the local government and the concrete plant have agreed to protect the cave, nearby mining explosions still rattle the landscape.

“We don’t know how long it’s still going to be there,” Aubert says.

It’s possible that protections for the area will strengthen. In an email, Hamrullah expressed hope that the cave system could be declared a UNESCO World Heritage site. And even though its future is uncertain, Brumm marvels at what the cave has already told us about our shared past.

“You do have this opportunity to sit in this cave where you’re only the fourth person, or fifth or sixth, to have seen this in tens of thousands of years, as far as we’re aware—and then to be privy to this knowledge, this understanding, to know how ancient this is,” he says. “It’s very hard to describe that feeling. But it’s certainly what keeps you going.”