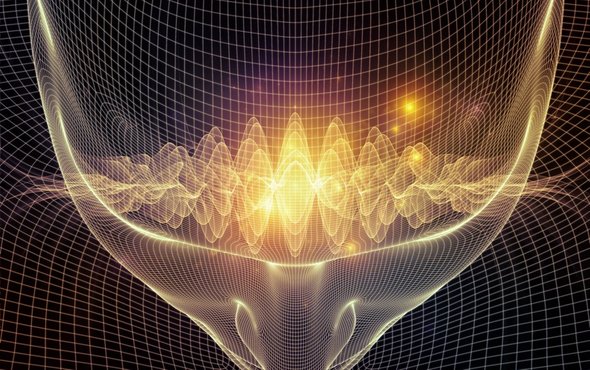 Signals long thought to be “noise” appear to represent a distinct form of brain activity.

Every few seconds a wave of electrical activity travels through the brain, like a large swell moving through the ocean. Scientists first detected these ultraslow undulations decades ago in functional magnetic resonance imaging (fMRI) scans of people and other animals at rest—but the phenomenon was thought to be either electrical “noise” or the sum of much faster brain signals and was largely ignored.

Now a study that measured these “infraslow” (less than 0.1 hertz) brain waves in mice suggests they are a distinct type of brain activity that depends on an animal’s conscious state. But big questions remain about these waves’ origin and function.

An fMRI scan detects changes in blood flow that are assumed to be linked to neural activity. “When you put someone in a scanner, if you just look at the signal when you don’t ask the subject to do anything, it looks pretty noisy,” says Marcus Raichle, a professor of radiology and neurology at Washington University School of Medicine in St. Louis and senior author of the new study, published in April in Neuron. “All this resting-state activity brought to the forefront: What is this fMRI signal all about?”

To find out what was going on in the brain, Raichle’s team employed a combination of calcium/hemoglobin imaging, which uses fluorescent molecules to detect the activity of neurons at the cellular level, and electrophysiology, which can record signals from cells in different brain layers. They performed both measurements in awake and anesthetized mice; the awake mice were resting in tiny hammocks in a dark room.

The team found that infraslow waves traveled through the cortical layers of the awake rodents’ brains—and changed direction when the animals were anesthetized. The researchers say these waves are distinct from so-called delta waves (between 1 and 4 Hz) and other higher-frequency brain activity.

These superslow waves may be critical to how the brain functions, Raichle says. “Think of, say, waves on the water of Puget Sound. You can have very rough days where you have these big groundswells and then have whitecaps sitting on top of them,” he says. These “swells” make it easier for brain areas to become active—for “whitecaps” to form, in other words.

Other researchers praised the study’s general approach but were skeptical that it shows the infraslow waves are totally distinct from other brain activity. “I would caution against jumping to a conclusion that resting-state fMRI is measuring some other property of the brain that’s got nothing to do with the higher-frequency fluctuations between areas of the cortex,” says Elizabeth Hillman, a professor of biomedical engineering at Columbia University’s Zuckerman Institute, who was not involved in the work. Hillman published a study in 2016 finding that resting-state fMRI signals represent neural activity across a range of frequencies, not just low ones.

More studies are needed to tease apart how these different types of brain signals are related. “These kinds of patterns are very new,” Hillman notes. “We haven’t got much of a clue what they are, and figuring out what they are is really, really difficult.”