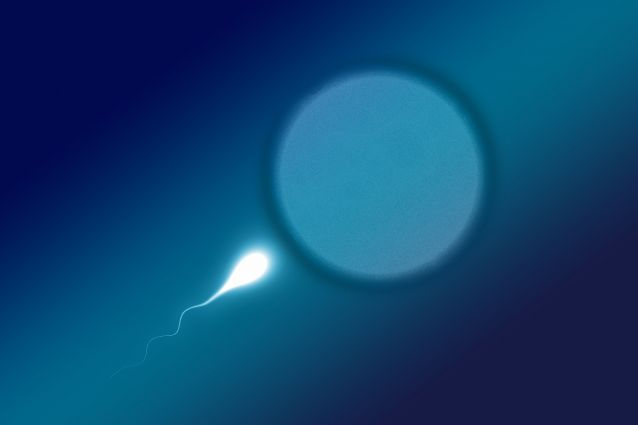 Exposure to early life trauma can lead to poor physical and mental health in some individuals, which can be passed on to their children. Studies in mice show that at least some of the effects of stress can be transmitted to offspring via environmentally-induced changes in sperm miRNA levels.

A new epigenetics study raises the possibility that the same is true in humans. It shows for the first time that the levels of the same two sperm miRNAs change in both men and mice exposed to early life stress. In mice, the negative effects of stress are transmitted to offspring. The study is published On May 23rd in Translational Psychiatry.

“The study raises the possibility that some of the vulnerability of children is due to Lamarckian type inheritance derived from their parents’ experiences,” said Larry Feig, Ph.D., professor of Developmental, Molecular and Chemical Biology at Tufts University School of Medicine and member of the Cell, Molecular and Developmental Biology and Neuroscience programs at the Sackler School of Graduate Biomedical Sciences at Tufts.

The human part of the study utilized the Adverse Childhood Experiences (ACE) questionnaire as an indicator of men’s early life trauma. The ACE Study questionnaire includes 10 yes or no questions about one’s experiences until the age of 18, including physical, verbal, or sexual abuse, and physical or emotional neglect. Other questions relate to one’s family members. Four or more yes answers put one at significantly increased risk for future mental and physical health problems. According to a ChildTrends research brief published in 2014, a remarkably high percentage (~10 percent) of the population report scores at or above this cutoff.

miRNAs constitute a newly appreciated type of gene regulator, where each miRNA controls a distinct set of genes. Until recently, sperm from fathers were thought to contribute only DNA to the mother’s egg upon fertilization, but new data in mice indicate that sperm also contribute miRNAs that influence the next generation. Sperm miRNA expression in humans is known to be affected by environmental factors, such as smoking and obesity, but no human study to date has documented the effects of stress.

The new study found that among 28 Caucasian male volunteers, the expression of two highly related sperm miRNAs, miR-449 and miR-34, were inversely proportional to the men’s ACE scores. Men with the most extensive early abuse (highest ACE scores) had as much as a 300-fold reduction in the two sperm miRNAs compared to men with the least abuse.

The idea that these changes can affect the next generation is supported by additional findings in the study, e.g.:

the same sperm miRNA changes that take place in men with high ACE scores also occur in mice exposed to early life social instability stress, which Feig’s lab has shown previously leads to anxiety and sociability defects in female offspring of stressed males for at least three generations;
these two sets of miRNAs are known to work together in mice to allow proper development of the brain and sperm;
in humans, miR-34c has been implicated in promoting early embryo development;
the mouse studies showed that the decline in these sperm miRNA levels is transmitted to the next generation; and
when these embryos mature, these miRNAs are also reduced in the sperm of their male offspring who pass on stress behaviors to their female offspring.
“This is the first study to show that stress is associated with altered levels of sperm miRNAs in humans. We are currently setting up a new, larger study in men, and additional experiments in mice that could yield further support for the idea that changes in these sperm miRNAs do, in fact, contribute to an elevation of stress-related disorders across generations,” said David Dickson, an M.D./Ph.D. student at Tufts and first author of the study.

“Looking to the future, we may be able to figure out a way to restore the low miRNA levels found in men exposed to extreme trauma, because epigenetic changes, such as stress-induced decreases in sperm miRNA expression, are reversible, unlike genetic changes that alter the DNA sequence,” Dickson added.

For example, obesity has been shown to alter specific sperm miRNA levels in men, while bariatric surgery and subsequent weight loss can reverse the changes. In addition, Isabelle Mansuy’s lab has reversed some of the negative effects of stress in mice across generations by exposing mice to an “enriched environment” that involves extensive social interactions, exercise and opportunities to explore their surroundings.

Feig pointed out that in addition to focusing on the potential transgenerational effects of stress, there is a growing appreciation that physicians should collect information on childhood trauma for the sake of the patients who are experiencing this early trauma.

This is because “childhood abuse, trauma and dysfunction adds to the risk of future physical and psychiatric maladies, and significant exposure to abusive and/or dysfunctional families is remarkably common. Moreover, sensitivity to PTSD has been shown to correlate with ACE score, implying the ACE questionnaire could be used as a screening tool to identify people who should take extra precaution to avoid potentially traumatic experiences,” he said.

“However, some people may not answer the ACE survey accurately due to inaccurate recall or because of the sensitive nature of many of the questions, particularly in settings that do not allow anonymity and/or where their answers could affect their future. Thus, discovery of unbiased markers for early trauma, like specific sperm miRNA content, could complement ACE surveys in some clinical settings to bolster preventative medicine,” he concluded.

The authors note that the relatively small sample size limits their ability to more deeply explore the association between ACE scores and miRNA expression. In addition, a longitudinal study with information on behavioral and psychological factors throughout adulthood, with repeated measurements of sperm miRNA content, could allow for further exploration on the effect of cumulative exposure to childhood trauma on miRNA.