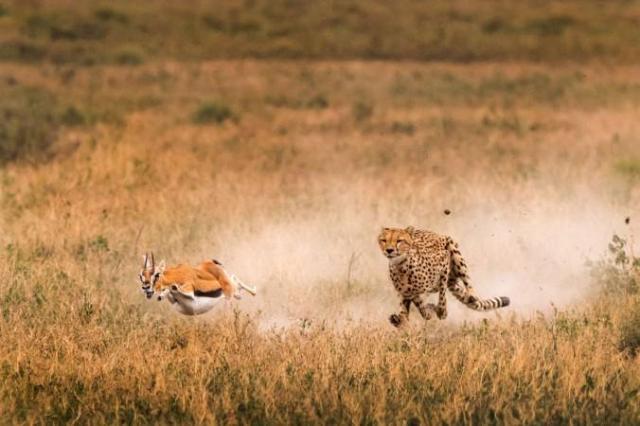 Cheetahs are synonymous with speed. But past the big cat’s slender build and lean muscles, there’s something inside that aids this animal’s need for speed.

A new report, published February 2 in Scientific Reports, shows that certain parts of the cheetah’s inner ear help to make it a better hunter. The study marks the first time researchers have analyzed the big cats’ inner ear.

ALL EARS
If you watch a cheetah sprinting in slow motion, you can see that they tend to keep their heads stable and their eyes fixed on prey even while in motion. To learn how the animal’s bone structure helps with this, lead author Camille Grohé turned to the animals’ inner ear.

The inner ear is crucial for maintaining balance and a steady head posture. It consists of three semicircular canals containing fluid and sensory hair cells that pick up motion in the head. Since each canal is angled differently, they’re each sensitive to different movements: one targets up-and-down motion, one side-to-side, and one tilts from one side to the other.

Using high-resolution imaging, Grohé and the team scanned 21 felid skulls. While some skulls were of other big cats, seven belonged to modern cheetahs. The researchers also imaged the skull of an extinct giant cheetah to see how the inner ear might have evolved.

The inner ears of cheetahs are like that of no other modern felids, the study found. Large vestibular systems—which help with balance—took up more of the inner ear of the cheetah than of any other big cat. Cheetahs also had longer semicircular ear canals, which help with head movement and eye direction.

These highly-tuned traits were not seen in the extinct cheetah species, which shows these developments in the cheetah’s inner ear happened relatively recently.

“The living cheetah’s ancestors have evolved slender bones that would allow them to run very fast and then an inner ear ultra-sensitive to head movements to hold their head still, enabling them to run even faster,” Grohé adds.

BUILT FOR SPEED
As the fastest land animal, lightweight cheetahs are built for sprinting. Their spines are long and flexible, which allows them to launch from 0 to 60 miles per hour in just three seconds. While their strong, lean muscles help propel them forward, their large nasal cavities help them gulp in air to recover after a chase.