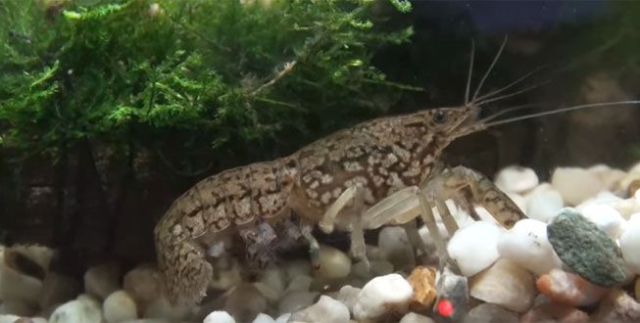 nvasions are usually difficult to miss, whether it’s a military invasion conducted by countries or political factions, or the fictional invasion of alien lifeforms and their very big ships.

However, one invasion began so quietly that we’re not even sure where, or how, it started. All we do know for sure is that the invaders are all over Europe and Madagascar, and that they have toeholds in other continents, including North America. Or maybe “clawholds” is a better phrase since the invaders are mutant crayfish that can clone themselves.

Yes, that’s right. Self-cloning crayfish called marbled crayfish (Procambarus virginalis) have invaded the planet, and it may be not be possible to stop them.

Marbled crayfish didn’t even exist until at least 1995. The story goes that it scientists only became aware of it because of a German aquarium owner who had gotten a bag of “Texan crayfish” from an American pet trader. Not long after the crayfish reached adulthood, the owner suddenly had a tank full of the creatures. Indeed, a single marbled crayfish can produce hundreds of eggs at a time, and all without needing to mate.

Scientists officially described the crayfish in 2003, confirming the reports of a crayfish capable of unisexual reproduction (all marbled crayfish are female), or parthenogenesis. These researchers did try to warn us about the havoc the crayfish could cause, writing that the species poses a “potential ecological threat” that could “outcompete native forms should even a single specimen be released into European lakes and rivers.”

Now, thanks to unwitting pet owners who dumped them into nearby lakes, feral populations of the marbled crayfish have been found in in a number of countries, including Croatia, the Czech Republic, Hungary, Japan, Sweden and Ukraine. In Madagascar, the marbled crayfish is threatening the existence of seven other crayfish species because its population grows so quickly and it will eat just about anything. In the European Union, the species, which is also called marmorkrebs, is banned; it’s illegal to own, distribute, sell or release the marbled crayfish into the wild.

A team of researchers decided to get to the bottom of the marbled crayfish’s origins and began work on sequencing its genome in 2013. This was no easy task since no one had sequenced the genome of a crayfish before, or even a relative of the crayfish. Once they sequenced it, however, they sequenced another 15 specimens’ genomes to suss out how this invasive clone army got started.

The study of the marbled crayfish’s genome was published in Nature Ecology and Evolution.

Marbled crayfish likely got their start when two slough crayfish, a species found in Florida, mated. One of those slough crayfish had a mutation in a sex cell — researchers couldn’t determine if it was an egg or sperm cell — that carried two sets of chromosomes instead of just one. Despite this mutation, the sex cells fused and the result was a female crayfish with three sets of chromosomes instead of the usual two. Also unexpectedly, the female offspring didn’t have any deformities as a result of those extra chromosomes.

That female was able to induce her own eggs and essentially clone herself, creating hundreds of offspring. The genetic similarities were constant across specimens, regardless of where they were collected. Only a few letters in crayfish’s DNA sequence were different.

As to how the crayfish is able to survive in such different waters, its extra chromosome may provide enough genetic material for it to adapt. And it may need that chromosome for other aspects of survival, too. Sexual reproduction creates different combinations of genes that in turn can increase the odds of developing a defense to pathogens. Should one pathogen develop a way to kill a single clone, the crayfish’s lack of genetic diversity could be its downfall.

Until then, scientists are intrigued to observe how well the crayfish can thrive, and for how long.

“Maybe they just survive for 100,000 years,” Frank Lyko, and lead author on the gene study suggested to The New York Times. “That would be a long time for me personally, but in evolution it would just be a blip on the radar.”

One thought on “Self-cloning crayfish may be unstoppable”