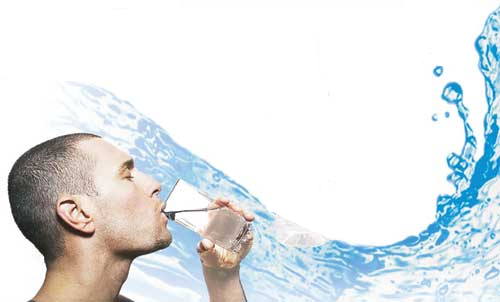 Viewed under a microscope, your tongue is an alien landscape, studded by fringed and bumpy buds that sense five basic tastes: salty, sour, sweet, bitter, and umami. But mammalian taste buds may have an additional sixth sense—for water, a new study suggests. The finding could help explain how animals can tell water from other fluids, and it adds new fodder to a centuries-old debate: Does water have a taste of its own, or is it a mere vehicle for other flavors?

Ever since antiquity, philosophers have claimed that water has no flavor. Even Aristotle referred to it as “tasteless” around 330 B.C.E. But insects and amphibians have water-sensing nerve cells, and there is growing evidence of similar cells in mammals, says Patricia Di Lorenzo, a behavioral neuroscientist at the State University of New York in Binghamton. A few recent brain scan studies also suggest that a region of human cortex responds specifically to water, she says. Still, critics argue that any perceived flavor is just the after-effect of whatever we tasted earlier, such as the sweetness of water after we eat salty food.

“Almost nothing is known” about the molecular and cellular mechanism by which water is detected in the mouth and throat, and the neural pathway by which that signal is transmitted to the brain, says Zachary Knight, a neuroscientist at the University of California, San Francisco. In previous studies, Knight and other researchers have found distinct populations of neurons within a region of the brain called the hypothalamus that can trigger thirst and signal when an animal should start and stop drinking. But the brain must receive information about water from the mouth and tongue, because animals stop drinking long before signals from the gut or blood could tell the brain that the body has been replenished, he says.

In an attempt to settle the debate, Yuki Oka, a neuroscientist at the California Institute of Technology in Pasadena, and colleagues searched for water-sensing taste receptor cells (TRCs) in the mouse tongue. They used genetic knockout mice to look for the cells, silencing different types of TRCs, then flushing the rodents’ mouths with water to see which cells responded. “The most surprising part of the project” was that the well-known, acid-sensing, sour TRCs fired vigorously when exposed to water, Oka says. When given the option of drinking either water or a clear, tasteless, synthetic silicone oil, rodents lacking sour TRCs took longer to choose water, suggesting the cells help to distinguish water from other fluids.

Next, the team tested whether artificially activating the cells, using a technique called optogenetics, could drive the mice to drink water. They bred mice to express light-sensitive proteins in their acid-sensing TRCs, which make the cells fire in response to light from a laser. After training the mice to drink water from a spout, the team replaced the water with an optic fiber that shone blue light on their tongues. When the mice “drank” the blue light, they acted as though they were tasting water, Oka says. Some thirsty mice licked the light spout as many as 2000 times every 10 minutes, the team reports this week in Nature Neuroscience.

The rodents never learned that the light was just an illusion, but kept drinking long after mice drinking actual water would. That suggests that although signals from TRCs in the tongue can trigger drinking, they don’t play a role in telling the brain when to stop, Oka says.

More research is needed to precisely determine how the acid-sensing taste buds respond to water, and what the mice experience when they do, Oka says. But he suspects that when water washes out saliva—a salty, acidic mucus—it changes the pH within the cells, making them more likely to fire.

The notion that one of the ways animals detect water is by the removal of saliva “makes a lot of sense,” Knight says. But it is still only one of many likely routes for sensing water, including temperature and pressure, he adds.

The “well-designed, intriguing” study also speaks to a long-standing debate over the nature of taste, Di Lorenzo says. When you find a counterexample to the dominant view that there are only five basic taste groups, she says, “it tells you you need to go back to the drawing board.”