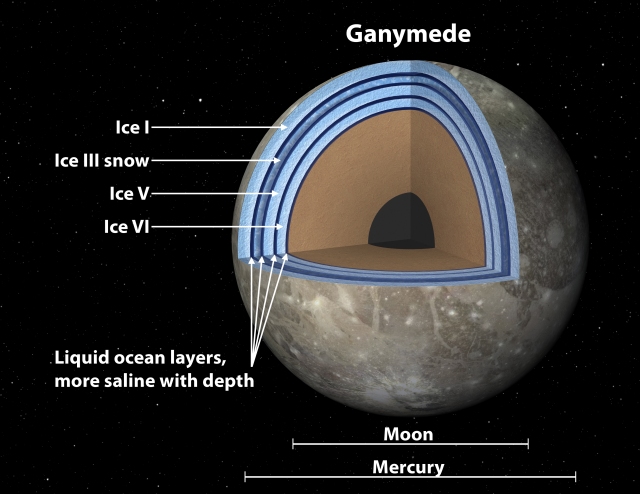 The ocean there is thought to extend to 10 times the depth of Earth’s oceans.

A salty ocean is lurking beneath the surface of Jupiter’s largest moon, Ganymede, scientists using the Hubble Space Telescope have found.

The ocean on Ganymede—which is buried under a thick crust of ice—could actually harbor more water than all of Earth’s surface water combined, according to NASA officials. Scientists think the ocean is about 60 miles (100 kilometers) thick, 10 times the depth of Earth’s oceans, NASA added. The new Hubble Space Telescope finding could also help scientists learn more about the plethora of potentially watery worlds that exist in the solar system and beyond.

“The solar system is now looking like a pretty soggy place,” said Jim Green, NASA’s director of planetary science. Scientists are particularly interested in learning more about watery worlds because life as we know it depends on water to thrive.

Scientists have also found that Ganymede’s surface shows signs of flooding. Young parts of Ganymede seen in a video map may have been formed by water bubbling up from the interior of the moon through faults or cryo-volcanos at some point in the moon’s history, Green said.

Scientists have long suspected that there was an ocean of liquid water on Ganymede—the largest moon in the solar system, at about 3,273 miles (5,268 kilometers) across—has an ocean of liquid water beneath its surface. The Galileo probe measured Ganymede’s magnetic field in 2002, providing some data supporting the theory that the moon has an ocean. The newly announced evidence from the Hubble telescope is the most convincing data supporting the subsurface ocean theory yet, according to NASA.

When Jupiter’s magnetic field changes, so does Ganymede’s. Researchers were able to watch the two auroras “rock” back and forth with Hubble. Ganymede’s aurora didn’t rock as much as expected, so by monitoring that motion, the researchers concluded that a subsurface ocean was likely responsible for dampening the change in Ganymede’s aurora created by Jupiter.

Hunting for auroras on other worlds could potentially help identify water-rich alien planets in the future, Heidi Hammel, executive vice president of the Association of Universities for Research in Astronomy, said during the teleconference. Scientists might be able to search for rocking auroras on exoplanets that could potentially harbor water using the lessons learned from the Hubble observations of Ganymede.

Astronomers might be able to detect oceans on planets near magnetically active stars using similar methods to those used by Saur and his research team, Hammel added.

“By monitoring auroral activity on exoplanets, we may be able to infer the presence of water on or within an exoplanet,” Hammel said. “Now, it’s not going to be easy—it’s not as easy as Ganymede and Jupiter, and that wasn’t easy. It may require a much larger telescope than Hubble, it may require some future space telescope, but nevertheless, it’s a tool now that we didn’t have prior to this work that Joachim and his team have done.”

Jupiter’s moons are popular targets for future space missions. The European Space Agency is planning to send a probe called JUICE—short for JUpiter ICy moons Explorer—to Jupiter and its moons in 2022. JUICE is expected to check out Europa, Callisto and Ganymede during its mission. NASA also has its eye on the Jupiter system. Officials are hoping to send a probe to Europa by the mid-2020s.

“This discovery marks a significant milestone, highlighting what only Hubble can accomplish,” John Grunsfeld, assistant administrator of NASA’s Science Mission, said in the same statement. “In its 25 years in orbit, Hubble has made many scientific discoveries in our own solar system. A deep ocean under the icy crust of Ganymede opens up further exciting possibilities for life beyond Earth.”