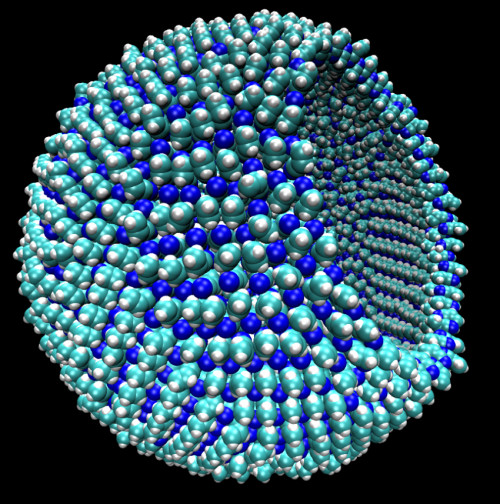 Taking a simultaneously imaginative and rigidly scientific view, Cornell chemical engineers and astronomers offer a template for life that could thrive in a harsh, cold world – specifically Titan, the giant moon of Saturn. A planetary body awash with seas not of water, but of liquid methane, Titan could harbour methane-based, oxygen-free cells that metabolise, reproduce and do everything life on Earth does.

Their theorised cell membrane, composed of small organic nitrogen compounds and capable of functioning in liquid methane temperatures of 292 degrees below zero, was published in Science Advances, 27th February. The work is led by chemical molecular dynamics expert Paulette Clancy, the Samuel W. and Diane M. Bodman Professor of Chemical and Biomolecular Engineering, with first author James Stevenson, a graduate student in chemical engineering. The paper’s co-author is Jonathan Lunine, the David C. Duncan Professor in the Physical Sciences in the College of Arts and Sciences’ Department of Astronomy.
Lunine is an expert on Saturn’s moons and an interdisciplinary scientist on the Cassini-Huygens mission that discovered methane-ethane seas on Titan. Intrigued by the possibilities of methane-based life on Titan, and armed with a grant from the Templeton Foundation to study non-aqueous life, Lunine sought assistance about a year ago from Cornell faculty with expertise in chemical modeling. Clancy, who had never met Lunine, offered to help.

“We’re not biologists, and we’re not astronomers, but we had the right tools,” Clancy said. “Perhaps it helped, because we didn’t come in with any preconceptions about what should be in a membrane and what shouldn’t. We just worked with the compounds that we knew were there and asked, ‘If this was your palette, what can you make out of that?’”

On Earth, life is based on the phospholipid bilayer membrane, the strong, permeable, water-based vesicle that houses the organic matter of every cell. A vesicle made from such a membrane is called a liposome. Thus, many astronomers seek extraterrestrial life in what’s called the circumstellar habitable zone, the narrow band around the Sun in which liquid water can exist. But what if cells weren’t based on water, but on methane, which has a much lower freezing point?

The engineers named their theorised cell membrane an “azotosome,” “azote” being the French word for nitrogen. “Liposome” comes from the Greek “lipos” and “soma” to mean “lipid body;” by analogy, “azotosome” means “nitrogen body.”

The azotosome is made from nitrogen, carbon and hydrogen molecules known to exist in the cryogenic seas of Titan, but shows the same stability and flexibility that Earth’s analogous liposome does. This came as a surprise to chemists like Clancy and Stevenson, who had never thought about the mechanics of cell stability before; they usually study semiconductors, not cells.

The engineers employed a molecular dynamics method that screened for candidate compounds from methane for self-assembly into membrane-like structures. The most promising compound they found is an acrylonitrile azotosome, which showed good stability, a strong barrier to decomposition, and a flexibility similar to that of phospholipid membranes on Earth. Acrylonitrile – a colourless, poisonous, liquid organic compound used in the manufacture of acrylic fibres, resins and thermoplastics – is present in Titan’s atmosphere.

Excited by the initial proof of concept, Clancy said the next step is to try and demonstrate how these cells would behave in the methane environment – what might be the analogue to reproduction and metabolism in oxygen-free, methane-based cells.

Lunine looks forward to the long-term prospect of testing these ideas on Titan itself, as he put it, by “someday sending a probe to float on the seas of this amazing moon and directly sampling the organics.”

Stevenson said he was in part inspired by science fiction writer Isaac Asimov, who wrote about the concept of non-water-based life in a 1962 essay, “Not as We Know It.”

Said Stevenson: “Ours is the first concrete blueprint of life not as we know it.”

Thanks to Da Brayn for bringing this to the attention of the It’s Interesting community.