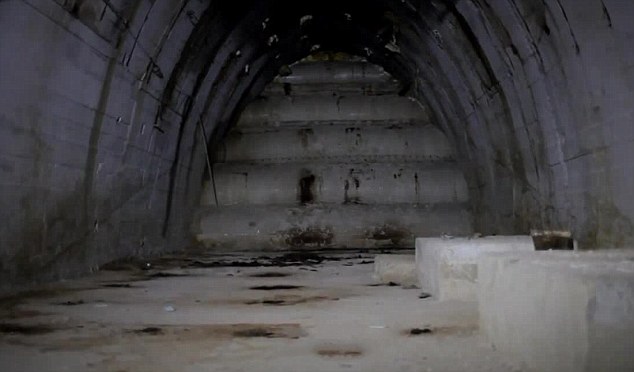 A labyrinth of secret underground tunnels believed to have been used by the Nazis to develop a nuclear bomb has been uncovered.

The facility, which covers an area of up to 75 acres, was discovered near the town of St Georgen an der Gusen, Austria last week, it has been reported.

Excavations began on the site after researchers detected heightened levels of radiation in the area – supporting claims that the Nazis were developing nuclear weapons.

Documentary maker Andreas Sulzer, who is leading the excavations, told the Sunday Times that the site is ‘most likely the biggest secret weapons production facility of the Third Reich’.

It is believed to be connected to the B8 Bergkristall underground factory, where the Messerschmitt Me 262 – the first operational jet fighter – was built.

There are also suggestions that the complex is connected to the Mauthausen-Gusen concentration camp.

Slave labour from the camp was used to build both complexes – with as many as 320,000 inmates in the harsh underground conditions.

But while the Bergkristall site was explored by Allied and Russia after the war, the Nazis appeared to have gone through greater lengths to conceal the newly-discovered tunnels.

Its entrance was only uncovered after the excavation team, which includes historians and scientists, pieced together information in declassified intelligence documents and testimonies from witnesses.

The team is now in the process of removing layers of soil and concrete packed into the tunnels and heavy granite plates that were used to cover the entrance.

Helmets belonging to SS troops and other Nazi relics are among the items that have been uncovered so far.

The excavation was halted last week by police, who demanded the group produce a permit for conducting research on historic sites. But Mr Sulzer is confident that work will resume next month.

He told the Sunday Times: ‘Prisoners from concentration camps across Europe were handpicked for their special skills – physicists, chemists or other experts – to work on this monstrous project and we owe it to the victims to finally open the site and reveal the truth.’

The probe was triggered by a research documentary by Mr Sulzer on Hitler’s quest to build an atomic bomb.

In it, he referenced diary entries from a physicist called up to work for the Nazis. There is other evidence of scientists working for a secret project managed by SS General Hans Kammler.

Kammler, who signed off the plans for the gas chambers and crematorium at Auschwitz, was in charge of Hitler’s missile programmes.

Mr Sulzer searched archives in Germany, Moscow and America for evidence of the nuclear weapons-building project led by the SS.

He discovered that on January 2, 1944, some 272 inmates of Mauthausen were taken from the camp to St Georgen to begin the construction of secret galleries.

By November that year, 20,000 out of 40,000 slave labourers drafted in to build the tunnels had been worked to death.

After the war, Austria spent some £10million in pouring concrete into most of the tunnels.

But Sulzer and his backers believe they missed a secret section where the atomic research was conducted.

The Soviets were stationed in St Georgen until 1955 and they took all of the files on the site back with them to Moscow.

Experts are trying to discover if there is a link between St Georgen and sites in Germany proper where scientists were assembled during the Third Reich in a bid to match American efforts to build the ultimate weapon.

In June 2011, atomic waste from Hitler’s secret nuclear programme was believed to have been found in an old mine near Hanover.

More than 126,000 barrels of nuclear material lie rotting over 2,000 feet below ground in an old salt mine.

Rumour has it that the remains of nuclear scientists who worked on the Nazi programme are also there, their irradiated bodies burned in secret by S.S. men sworn to secrecy.

Thanks to Jody Troupe for bringing this to the attention of the It’s Interesting community.