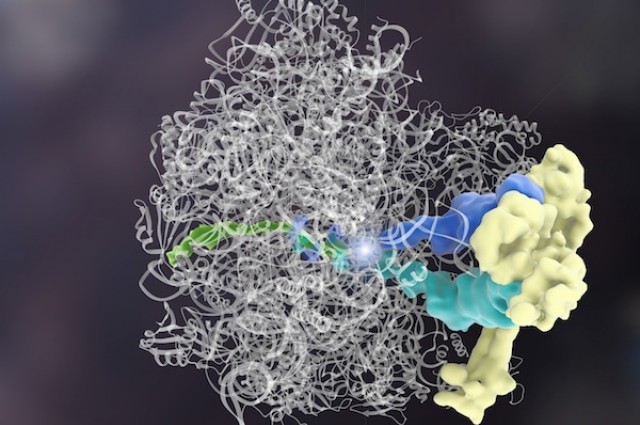 In our cells, proteins are the tiny machines that do most of the work. And the instructions for making proteins — and for piecing together their building blocks, called amino acids — are laid out by DNA, then relayed through RNA. But now, researchers show for the first time that amino acids can be assembled by another protein — without genetic instructions. These surprising findings were published in Science this week.

If a cell is an automobile-making factory, then ribosomes are the machines on the protein assembly line that links together amino acids in an order specified by DNA and messenger RNA (mRNA), an intermediate template. If something goes awry and a ribosome stalls, the quality control team shows up to disassemble the ribosome, discard that bit of genetic blueprint, and recycle the partially-made protein.

Turns out, that assembly line can keep going even if it loses its genetic instructions, according to a large U.S. team led by University of Utah, University of California, San Francisco, and Stanford researchers. They discovered an unexpected mechanism of protein synthesis where a protein, and not the normal genetic blueprint, specifies which amino acids are added.

“In this case, we have a protein playing a role normally filled by mRNA,” UCSF’s Adam Frost says in a news release. “I love this story because it blurs the lines of what we thought proteins could do.”

Frost and colleagues found a never-before-seen role for one member of the quality control team: a protein named Rqc2, which helps recruit transfer RNA (tRNA) to sites of ribosomal breakdowns (tRNA is responsible for bringing amino acids to the protein assembly line). Before the incomplete protein gets recycled, Rqc2 prompts the stalled ribosomes to add two amino acids — alanine and threonine — over and over. And that’s because the Rqc2–ribosome complex binds tRNAs that carry those two specific amino acids. In the auto analogy, the assembly line keeps going despite having lost its instructions, picking up whatever it can and attaching it in no particular order: horn-wheel-wheel-horn-wheel-wheel-wheel-wheel-horn, for example.

Pictured above, Rqc2 (yellow) binds tRNAs (blue and teal), which add amino acids (bright sot in the middle) to a partially-made protein (green). The complex binds the ribosome (white). A truncated protein with a seemingly random sequence of alanines and threonines probably doesn’t work properly, and that tail could be a code that signals for the malformed protein to be destroyed.