Researchers at the Massachusetts Institute of Technology, the U.S. Army Research, Development and Engineering Command (RDECOM) and other groups from business and academia are joining forces to create a Tactical Assault Light Operator Suit, or TALOS, that “promises to provide superhuman strength with greater ballistic protection,” according to a statement released by the U.S. Army.

The most amazing features of the suit include integrated 360-degree cameras not unlike Google Glass (but with night vision capabilities), sensors that can detect injuries and apply a wound-sealing foam, and — get ready for this — a bulletproof exoskeleton made of magnetorheological fluids that can change from liquid to solid in milliseconds when a magnetic field or electrical current is applied.

If it all reminds you of the liquid-metal shapeshifter T-1000 from “Terminator” or some other sci-fi character, you’re not alone. “It sounds exactly like ‘Iron Man,'” Gareth McKinley, a professor at MIT, told NPR. “The other kind of things that you see in the movies I think that would be more realistic at the moment would be the kind of external suit that Sigourney Weaver wears in ‘Aliens,’ where it’s a large robot that amplifies the motions and lifting capability of a human.”

Not everyone, however, is enamored with the super-advanced gizmos being proposed for the soldiers of tomorrow. “My sense is it is an up-armored Pinocchio,” Scott Neil, a retired special forces master sergeant and Silver Star recipient, told the Tampa Tribune. “Now the commander can shove a monkey in a suit and ask us to survive a machine gun, IED [improvised explosive device] and poor intelligence all on the same objective. And when you die in it, as it melds to your body, you can bury them in it.”

Even believers in the TALOS suit acknowledge its limitations. “The acronym TALOS was chosen deliberately,” McKinley said. “It’s the name of the bronze armored giant from ‘Jason and the Argonauts.’ Like all good superheroes, Talos has one weakness. For the Army’s TALOS, the weak spot is either the need to carry around a heavy pump for a hydraulic system, or lots of heavy batteries. We don’t have Iron Man’s power source yet.”

For would-be sci-fi superheroes who are ready for their very own TALOS, the wait may prove excruciating: Though various components of the suit are currently in development, the Army hopes to have a prototype ready next year, and an advanced model won’t be developed until at least two years after that. 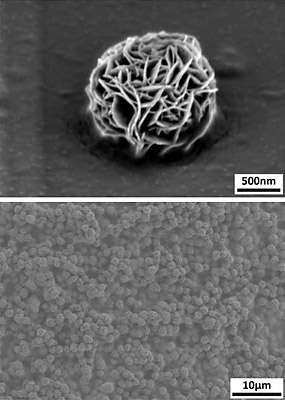 A bit reminiscent of the Terminator T-1000, a new material created by Cornell researchers is so soft that it can flow like a liquid and then, strangely, return to its original shape.

Rather than liquid metal, it is a hydrogel, a mesh of organic molecules with many small empty spaces that can absorb water like a sponge. It qualifies as a “metamaterial” with properties not found in nature and may be the first organic metamaterial with mechanical meta-properties.

Hydrogels have already been considered for use in drug delivery — the spaces can be filled with drugs that release slowly as the gel biodegrades — and as frameworks for tissue rebuilding. The ability to form a gel into a desired shape further expands the possibilities. For example, a drug-infused gel could be formed to exactly fit the space inside a wound.

Dan Luo, professor of biological and environmental engineering, and colleagues describe their creation in the Dec. 2 issue of the journal Nature Nanotechnology.

The new hydrogel is made of synthetic DNA. In addition to being the stuff genes are made of, DNA can serve as a building block for self-assembling materials. Single strands of DNA will lock onto other single stands that have complementary coding, like tiny organic Legos. By synthesizing DNA with carefully arranged complementary sections Luo’s research team previously created short stands that link into shapes such as crosses or Y’s, which in turn join at the ends to form meshlike structures to form the first successful all-DNA hydrogel. Trying a new approach, they mixed synthetic DNA with enzymes that cause DNA to self-replicate and to extend itself into long chains, to make a hydrogel without DNA linkages.

“During this process they entangle, and the entanglement produces a 3-D network,” Luo explained. But the result was not what they expected: The hydrogel they made flows like a liquid, but when placed in water returns to the shape of the container in which it was formed.

“This was not by design,” Luo said.

Examination under an electron microscope shows that the material is made up of a mass of tiny spherical “bird’s nests” of tangled DNA, about 1 micron (millionth of a meter) in diameter, further entangled to one another by longer DNA chains. It behaves something like a mass of rubber bands glued together: It has an inherent shape, but can be stretched and deformed.

Exactly how this works is “still being investigated,” the researchers said, but they theorize that the elastic forces holding the shape are so weak that a combination of surface tension and gravity overcomes them; the gel just sags into a loose blob. But when it is immersed in water, surface tension is nearly zero — there’s water inside and out — and buoyancy cancels gravity.

To demonstrate the effect, the researchers created hydrogels in molds shaped like the letters D, N and A. Poured out of the molds, the gels became amorphous liquids, but in water they morphed back into the letters. As a possible application, the team created a water-actuated switch. They made a short cylindrical gel infused with metal particles placed in an insulated tube between two electrical contacts. In liquid form the gel reaches both ends of the tube and forms a circuit. When water is added, the gel reverts to its shorter form that will not reach both ends. (The experiment is done with distilled water that does not conduct electricity.)

The DNA used in this work has a random sequence, and only occasional cross-linking was observed, Luo said. By designing the DNA to link in particular ways he hopes to be able to tune the properties of the new hydrogel.

Centre for the Study of Existential Risk(CSER) will study dangers posed by biotechnology, artificial life, nanotechnology and climate change.

The scientists said that to dismiss concerns of a potential robot uprising would be “dangerous”.

Fears that machines may take over have been central to the plot of some of the most popular science fiction films.

Perhaps most famous is Skynet, a rogue computer system depicted in the Terminator films.

Skynet gained self-awareness and fought back after first being developed by the US military.

But despite being the subject of far-fetched fantasy, researchers said the concept of machines outsmarting us demanded mature attention.

“The seriousness of these risks is difficult to assess, but that in itself seems a cause for concern, given how much is at stake,” the researchers wrote on a website set up for the centre.

“It seems a reasonable prediction that some time in this or the next century intelligence will escape from the constraints of biology,” Prof Price told the AFP news agency.

“What we’re trying to do is to push it forward in the respectable scientific community.”

He added that as robots and computers become smarter than humans, we could find ourselves at the mercy of “machines that are not malicious, but machines whose interests don’t include us”.

Survival of the human race permitting, the centre will launch next year.