Just as humans lament not pursuing a lover or bemoan having eaten that extra slice of chocolate cake, rats may experience feelings of regret, too, new research suggests.

When rats were given the option of visiting rooms that contained different foods, and they skipped a good deal for a worse one, they glanced back at the former room, rushed through eating the snack and were more likely to tolerate longer wait times for what they considered the more desirable food , researchers found.

Furthermore, the rats’ brain activity represented the missed opportunity, suggesting the animals were, in fact, experiencing regret over their choice.

“The rat is representing the counterfactual — the ‘what might have been,'” David Redish, a neuroscientist at the University of Minnesota in Minneapolis, and senior author of the study detailed today (June 8) in the journal Nature Neuroscience.

No other studies have shown convincingly that any animal besides humans experience regret, though some studies hinted it was possible, the researchers said.

How do you define regret? You can’t exactly ask a rat if it feels regret, but even if you could, it wouldn’t be proof, just as it can be difficult to tell if a human feels regret just by asking them.

It’s important to distinguish between regret and disappointment, Redish told Live Science. Regret occurs when you make a mistake, but recognize there’s an alternate action you could have taken that would have resulted in a better outcome, he said. Disappointment happens when “the world’s just not as good as you hoped, but it’s not necessarily your fault,” he said.

To test whether rats could feel regret, Redish and his graduate student Adam Steiner designed a kind of “restaurant row” for the animals — a circular enclosure with pathways leading off it to “restaurants” with different kinds of food, which were dispensed after some delay.

As a rat passed each pathway, it heard a tone that told the animal how long it would have to wait for the food (like being told the wait time at a restaurant). Each rat had its own favorite food, such as banana or chocolate, and would wait longer to get it, Redish said. Each rat was given an hour to explore the enclosure, during which it could only move in one direction between restaurants.

If the rat passed up a good deal — for instance, bypassing a food it liked in favor of a shorter wait time — and encountered a worse deal at the next restaurant, it would glance backward at the one it passed up. Not only that, the rat rushed through eating its chosen food, much like a regretful human would, and was more likely to take a “worse deal” in the future, the researchers said.

But the rats’ behavior was only part of the story. The researchers also made electrical recordings of the rats’ brains during the task, from neurons in the orbitofrontal cortex, the part of the brain that is active in human brain scans when people feel regret. Decoding these signals allowed the researchers to “read the rat’s mind,” Redish said.

Surprisingly, when the rats were looking back at the restaurant they ultimately passed up, their brains showed a representation of entering that restaurant — not of the food they missed. The findings suggest the animals were expressing regret over their actions, rather than just disappointment, the researchers said.

If rats can feel regret, what about other animals? Redish speculates that any mammal might be capable of the feeling, because they have many of the same brain structures as rats and humans.

“Regret is something we think of as very human and very cognitive,” Redish said, but “we’re seeing that the rats are much more cognitive than we thought.”

All over the southern United States, miniature foes are engaging in fierce battle. Invasive “crazy ants” have been displacing fire ants, and a curious defensive strategy may be behind the crazy ants’ bold takeover.

Fire ants pack potent venom that kills most ants that come into contact with it. But when crazy ants get stung, they secrete a substance and rub it all over themselves to neutralize the venom, new research finds.

This detoxifying behavior — the first example of an insect capable of detoxifying another’s venom — may be the reason crazy ants have been able to compete with the venomous fire ants, according to the study detailed online on Feb. 13 in the journal Science.

“As this plays out, unless something new and different happens, crazy ants are going to displace fire ants from much of the southeastern U.S. and become the new ecologically dominant invasive ant species,” study leader Ed LeBrun, a researcher at the University of Texas at Austin, said in a statement.

Fire ants (Solenopsis invicta) invaded the U.S. South in the 1930s, hailing from their native South America home. Another South American species, tawny (or raspberry) crazy ants (Nylanderia fulva) — named for their color and their quick, erratic movements — invaded Texas and Florida in the early 2000s, and have been steamrolling fire ant populations in the South ever since.

When fire ants attack, they dab their enemies with powerful venom that usually kills other insects. But LeBrun’s team noticed that after crazy ants were dabbed with the venom, they would stand on their hind and middle legs, curl their abdomens — which are covered in glands that secrete formic acid — and smear the acid all over their bodies.

To study how the detoxing substance worked, the researchers sealed off the crazy ants’ glands with nail polish and then placed the ants in a container with red fire ants. Only about half of these crazy ants survived after being dabbed with venom by the fire ants, compared with 98 percent of unpainted crazy ants.

The researchers aren’t sure exactly how the formic acid protects crazy ants from the fire ant venom. The acid may protect the crazy ant by destroying venom proteins and preventing them from penetrating the ant’s exoskeleton.
Crazy ants and fire ants are both native to northern Argentina, Paraguay and southern Brazil, where their territories overlap. The crazy ants likely evolved their detoxifying behavior alongside their venomous neighbors, the researchers said.

In contrast to fire ants, crazy ants don’t confine themselves to mounds in the garden. They crawl inside homes and even swarm inside electronic appliances — shorting out phones, air conditioners and other devices.

“When you talk to folks who live in the invaded areas, they tell you they want their fire ants back,” LeBrun told Live Science previously.

Crazy ants don’t have as painful a sting as fire ants, but they multiply more quickly and don’t eat the same ant poison bait, scientists say. Fortunately, the crazy ant invasion moves slowly, advancing only about 600 feet (180 meters) per year, except if transported in potted plants or vehicles. LeBrun recommends that people check plants for ant nests before buying them, and check their cars before traveling if they live in crazy ant-infested areas.

Other than human activities, geology and climate are the only factors standing in the way of these determined insects, which continue their relentless takeover of the South. 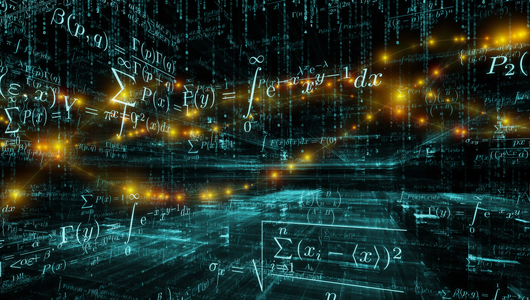 Scientists have long used mathematics to describe the physical properties of the universe. But what if the universe itself is math? That’s what cosmologist Max Tegmark believes.

“If you accept the idea that both space itself, and all the stuff in space, have no properties at all except mathematical properties,” then the idea that everything is mathematical “starts to sound a little bit less insane,” Tegmark said in a talk given Jan. 15 here at The Bell House. The talk was based on his book “Our Mathematical Universe: My Quest for the Ultimate Nature of Reality” (Knopf, 2014).

“If my idea is wrong, physics is ultimately doomed,” Tegmark said. But if the universe really is mathematics, he added, “There’s nothing we can’t, in principle, understand.”

The idea follows the observation that nature is full of patterns, such as the Fibonacci sequence, a series of numbers in which each number is the sum of the previous two numbers. The flowering of an artichoke follows this sequence, for example, with the distance between each petal and the next matching the ratio of the numbers in the sequence.

The nonliving world also behaves in a mathematical way. If you throw a baseball in the air, it follows a roughly parabolic trajectory. Planets and other astrophysical bodies follow elliptical orbits.

“There’s an elegant simplicity and beauty in nature revealed by mathematical patterns and shapes, which our minds have been able to figure out,” said Tegmark, who loves math so much he has framed pictures of famous equations in his living room.

One consequence of the mathematical nature of the universe is that scientists could in theory predict every observation or measurement in physics. Tegmark pointed out that mathematics predicted the existence of the planet Neptune, radio waves and the Higgs boson particle thought to explain how other particles get their mass.

And speaking of the human mind, could we use math to explain the brain?

Some have described the human brain as the most complex structure in the universe. Indeed, the human mind has made possible all of the great leaps in understanding our world.

Someday, Tegmark said, scientists will probably be able to describe even consciousness using math. (Carl Sagan is quoted as having said, “the brain is a very big place, in a very small space.”)

“Consciousness is probably the way information feels when it’s being processed in certain, very complicated ways,” Tegmark said. He pointed out that many great breakthroughs in physics have involved unifying two things once thought to be separate: energy and matter, space and time, electricity and magnetism. He said he suspects the mind, which is the feeling of a conscious self, will ultimately be unified with the body, which is a collection of moving particles.

But if the brain is just math, does that mean free will doesn’t exist, because the movements of particles could be calculated using equations? Not necessarily, he said.

One way to think of it is, if a computer tried to simulate what a person will do, the computation would take at least the same amount of time as performing the action. So some people have suggested defining free will as an inability to predict what one is going to do before the event occurs.

But that doesn’t mean humans are powerless. Tegmark concluded his talk with a call to action: “Humans have the power not only to understand our world, but to shape and improve it.”