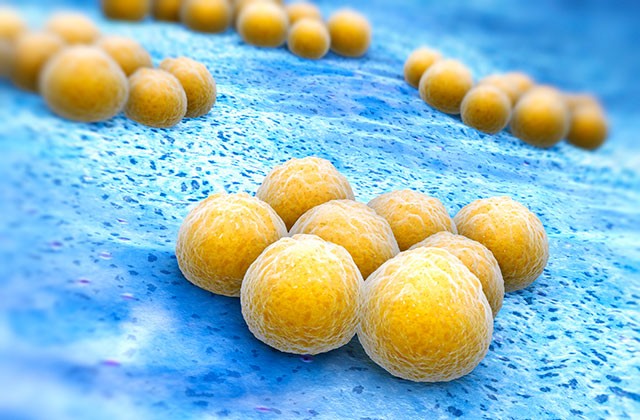 University of Iowa researchers have discovered what causes the lethal effects of staphylococcal infective endocarditis – a serious bacterial infection of heart valves that kills approximately 20,000 Americans each year. According to the UI study, the culprits are superantigens — toxins produced in large quantities by Staphylococcus aureus bacteria — which disrupt the immune system, turning it from friend to foe.

“The function of a superantigen is to ‘mess’ with the immune system,” says Patrick Schlievert, PhD, UI professor and chair of microbiology at the UI Carver College of Medicine. “Our study shows that in endocarditis, a superantigen is over-activating the immune system, and the excessive immune response is actually contributing very significantly to the destructive aspects of the disease, including capillary leakage, low blood pressure, shock, fever, destruction of the heart valves, and strokes that may occur in half of patients.”

Staph bacteria is the most significant cause of serious infectious diseases in the United States, according to the Centers for Disease Control and Prevention (CDC), and infective endocarditis is the most serious complication of staph bloodstream infection. This dangerous condition affects approximately 40,000 people annually and has a death rate of about 50 percent. Among patients who survive the infection, approximately half will have a stroke due to the damage from the aggressive infection of the heart valves.

Despite the serious nature of this disease, little progress has been made over the past several decades in treating the deadly condition.

The new study, led Schlievert, and published Aug. 20 in the online open-access journal mBio, suggests that blocking the action of superantigens might provide a new approach for treating infective endocarditis.

“The idea is that either therapeutics or vaccination might be a strategy to block the harmful effects of the superantigens, which gives us the chance to do something about the most serious complications of staph infections.”

The UI scientists used a strain of methicillin resistant staph aureus (MRSA), which is a common cause of endocarditis in humans, in the study. They also tested versions of the bacteria that are unable to produce superantigens. By comparing the outcomes in the animal model of infection with these various bacteria, the team proved that the lethal effects of endocarditis and sepsis are caused by the large quantities of the superantigen staphylococcal enterotoxin C (SEC) produced by the staph bacteria.

The study found that SEC contributes to disease both through disruption of the immune system, causing excessive immune response to the infection and low blood pressure, and direct toxicity to the cells lining the heart.

Low blood flow at the infection site appears to be one of the consequences of the superantigen’s action. Increasing blood pressure by replacing fluids reduced the formation of so-called vegetations – plaque-like meshwork made up of cellular factors from the body and bacterial cells — on the heart valves and significantly protected the infected animals from endocarditis. The researchers speculate that increased blood flow may act to wash away the superantigen molecules or to prevent the bacteria from settling and accumulating on the heart valves.