Glaciers in Antarctica are being melted not only by warmer ocean waters but also by underwater volcanoes, a change in our basic understanding of what’s happening underneath West Antarctica’s ice sheet, scientists say.

Geothermal heat from underneath is helping melt the region’s Thwaites Glacier, in the headlines recently for its rapid melt and retreat, researchers at the University of Texas at Austin say.

Scientists in the university’s Institute for Geophysics say they used ice-penetrating radar aboard aircraft to find significant geothermal heat sources — hotter and spread over a broader area than previously thought — underneath the glacier.

Caused by magma moving underground and volcanic activity associated with that movement, geothermal heat might represent a significant factor in changing the stability of the ice mass above, they researchers reported in the Proceedings of the National Academy of Sciences.

Rather than a uniform region of heat beneath, like a pancake griddle, geothermal sources under the Thwaites Glacier more resemble a stove top with a multitude of burners emitting heat in different locations and at different levels, research scientist Don Blankenship says.

“It’s the most complex thermal environment you might imagine,” he says. “And then you plop the most critical dynamically unstable ice sheet on planet Earth in the middle of this thing, and then you try to model it. It’s virtually impossible.”

Under the Earth’s other continents the average is less than 65 milliwatts per square meter, they said.

The Thwaites Glacer is an outflow glacier — pushing into the Amundsen Sea — that is the size of Florida and hold the key to trying to predict possible future rises in sea levels, they said.

Studying it could help yield clues to the future state of the entire West Antarctic Ice sheet, they added.

A complete collapse of Thwaites Glacier could push global sea levels up by three to six feet, and a melting of the entire ice sheet could double that, the researchers said.

“The combination of variable subglacial geothermal heat flow and the interacting subglacial water system could threaten the stability of Thwaites Glacier in ways that we never before imagined,” he says. 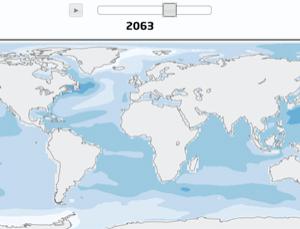 As the world warms, ice melts and water expands, sea level will rise – but faster in some places than others. These simulations, which assume warming in the middle of the range indicated by climate models, provide the best view yet of probable regional variation in sea level rise over the coming decades. Use the play button or slider to control the animations.

Click the link below to view projections for high or low emissions scenarios.

SYDNEY, Tokyo and Buenos Aires watch out. These cities will experience some of the greatest sea level rises by 2100, according to one of the most comprehensive predictions to date.

Sea levels have been rising for over 100 years – not evenly, though. Several processes are at work, says Mahé Perrette of the Potsdam Institute for Climate Impact Research in Germany. Some land is sinking, some is rising. Stronger currents create slopes in sea surface, and since all things with mass exert a gravitation pull, disappearing ice sheets lead to a fall in sea levels in their surrounding areas.

Perrette has modelled all of these effects and calculated local sea level rises in 2100 for the entire planet. While the global average rise is predicted to be between 30 and 106 centimetres, he says tropical seas will rise 10 or 20 per cent more, while polar seas will see a below-average rise. Coasts around the Indian Ocean will be hard hit, as will Japan, south-east Australia and Argentina (Earth System Dynamics, doi.org/kbf).

New York’s position may be less perilous than previously thought. A weakening of the Atlantic Gulf Stream will cause water to slop westwards, triggering a rapid rise on the eastern seaboard, but this will be counteracted by Greenland’s weaker gravitational pull. The city is not out of the woods, though, warns Aimée Slangen of Utrecht University in the Netherlands, whose own model suggests that Antarctica could lose a lot of ice, which would produce an above-average rise throughout the northern hemisphere.

For now, Perrette offers a warning to tropical countries. “You may have 120 centimetres of sea level rise on your coastline,” he says. “Build defences.”