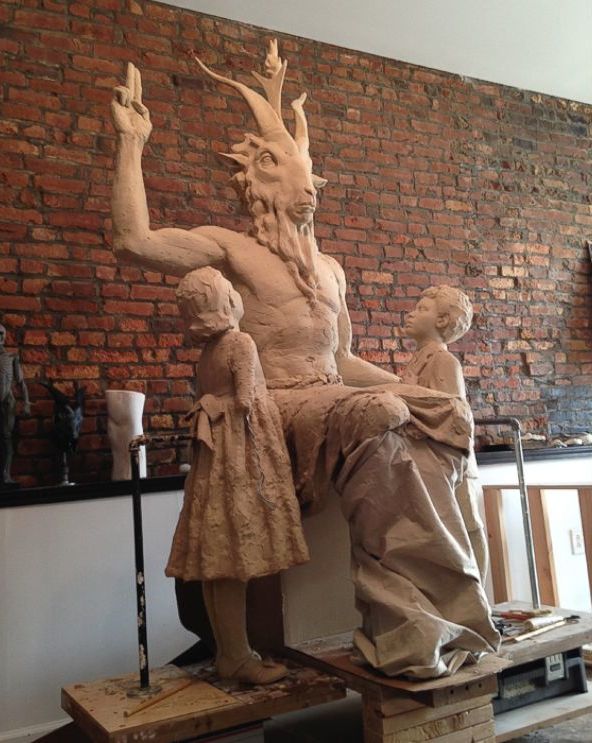 A Satanist statue cast in bronze is just months away from completion, and activists hope that it will find a home on the lawn of the Oklahoma State Capitol. Ultimately, the statue — which features the seven-foot tall, horned figure of Baphomet fawned upon by two exultant children — is intended to stand directly next to a highly controversial monument of the ten commandments that was donated by a state legislator in 2012 and subsequently placed on the grounds of the Capitol.

The Baphomet figure, complete with a goat head, angel wings, and a beard, comes from a recently-formed New York group identifying as The Satanic Temple, which raised over $28,000 on Indiegogo earlier this year to commission a sculptor and create the piece. Satanic Temple spokesperson Lucian Greaves tells ABC News that the statue is a symbol to “celebrate our progress as a pluralistic nation founded on secular law.”

We’re just now getting our first look at the what the statue will look like, thanks to images of the mold released by The Satanic Temple this week. Unfortunately for the group’s activist aims, there hasn’t been much progress on securing a spot for the statue at the Capitol in Oklahoma, one of the most Christian states in the US. The American Civil Liberties Union (ACLU) is currently challenging the ten commandments statue in court on grounds that it violates the Constitution’s “establishment clause” against a national religion, and Oklahoma has prohibited applications for additional statues pending the completion of that case.

Greaves has made it clear that the group would no longer petition to have the statue installed should the ten commandments monument be removed, but he isn’t concerned about finding somewhere else to place the statue should they fail to get permission in Oklahoma. “There are no shortage of public locations across the US where religious monuments await a contrasting voice,” he tells Vice, which first published photos of the statue. And they’re prepared should demonstrators destroy the statue: they’re holding onto the cast and plan to take out an insurance policy on the statue.

Thanks to Dr. Lutter for bringing this to the attention of the It’s Interesting community.

The Easter Bunny took to the sky on Saturday, dropping tens of thousands of eggs by helicopter on Owasso’s Centennial Park.

The congregation of Lifepoint Baptist Church and area sponsors filled more than 54,000 plastic eggs with candy, toys, stickers and other freebies for the annual Owasso Egg Drop.

Gregg’s fond memories of Easter egg hunts as a child inspired him to organize the first Owasso Egg Drop six years ago.

He approached Tulsa Helicopter to participate, and the company has since donated its annual egg-dropping services.

Families decked in sunglasses, colorful holiday wear and carrying an array of festive egg-carrying receptacles poured into the park for front-row spots along the yellow caution tape marking six drop zones, five divided by age and one designated for special needs children.

Then the waiting began as the chopper rained down bagfuls of the loot in each zone.

As volunteers signaled the all clear, children made a mad dash for the eggs, picking the fields clean in less than two minutes.

As 8-year-old Wyatt Cargill of Owasso inventoried his spoils moments later, he described the event as “very cool.”

“He has a lot of fun. He enjoys the bouncy places, the egg drop,” his father, David Cargill, said.

Gregg estimated attendance at between 5,000 and 10,000 people and said the draw has “gotten bigger every single year.”

Saturday was the Cargills third year in attendance.

Mother Terrie Cargill said the event is a good way to reach a lot of people and touch lives.

“It probably takes all year to put together,” she speculated.

Thanks to Dr. HGP for bringing this to the attention of the It’s Interesting community.