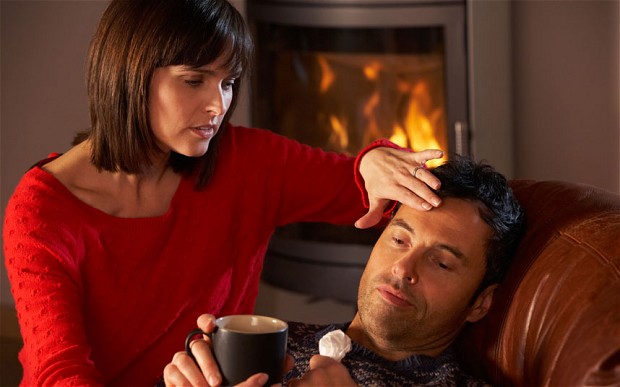 New study suggests that men may actually suffer more when they have influenza because high levels of testosterone can weaken immune response.

For years women have cried “man flu” when men make a fuss over a few sniffles.

But a new study suggests that men may actually suffer more when they are struck down with flu – because high levels of testosterone can weaken their immune response.

The study by Stanford University School of Medicine, examined the reactions of men and women to vaccination against flu.

It found women generally had a stronger antibody response to the jab than men, giving them better protection against the virus.

Men with lower testosterone levels also had a better immune response, more or less equivalent to that of women.

It has long been suggested that men might be more susceptible to bacterial, viral, fungal and parasitic infection than women are.

The study published in the Proceedings of the National Academy of Sciences, found women had higher blood levels of signaling proteins that immune cells pass back and forth, when the body is under threat.

Previous research has found that testosterone has anti-inflammatory properties, suggesting a possible interaction between the male sex hormone and immune response.

Professor of microbiology and immunology Mark Davis said: “This is the first study to show an explicit correlation between testosterone levels, gene expression and immune responsiveness in humans.

“It could be food for thought to all the testosterone-supplement takers out there.”

Scientists said they were left perplexed as why evolution would designed a hormone that enhances classic male sexual characteristics – such as muscle strength, beard growth and risk-taking propensity – yet left them with a weaker immune system.

Previous studies have found that while women may accuse men of exaggerating when they have flu, females who are more likely to admit to having sniffles and sneezes.

The research, carried out by London School of Hygiene and Tropical Medicine last winter, shows that women are are 16 per cent more likely to say they are ill.