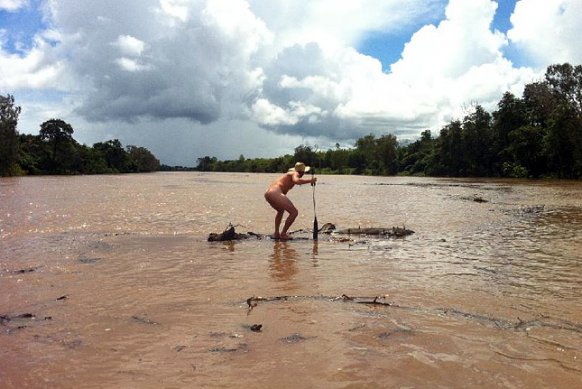 The croc-infested Daly River was up to 9m deep when this man was tackling the flow on a log.

A fisherman risked his life for what he considered a good cause – a bet. He won two cases of bourbon for jumping on to a log racing down a flooded, crocodile-infested river in the nude, riding the makeshift raft for about three minutes before clambering back into a boat.

“I’d enjoyed a few beers and it seemed a good idea at the time,” he said. “We weren’t catching any fish – because the river was flowing too fast – so I thought, ‘Why not?’ “But when I woke up the next morning, it didn’t seem so clever.”

Witness Billy Innes said his friend thought nothing of the dangers of drowning or being eaten by a crocodile. “It was hilarious,” he said.

The daredevil, who asked not to be named, was camping at the Daly River on Sunday when he accepted the bet.

“Huge trees were hammering down the river,” Mr Innes said. “It was quite a sight. Someone dared him to get on to one of the logs and row across the river. We went out in a boat and he jumped overboard on to a tree. He managed to stay on for quite a while before getting back into the boat. He got two cases of Jack Daniels for it – and thought that made it all worthwhile.”

The Daly is one of the Territory big “croc rivers”.

Keith Parry, 20, was killed while swimming across the Daly River in April 2009. He was crossing the river because he wanted more beer.