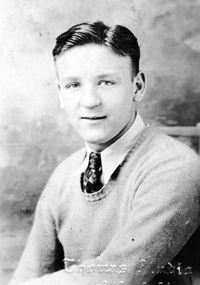 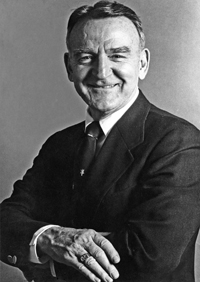 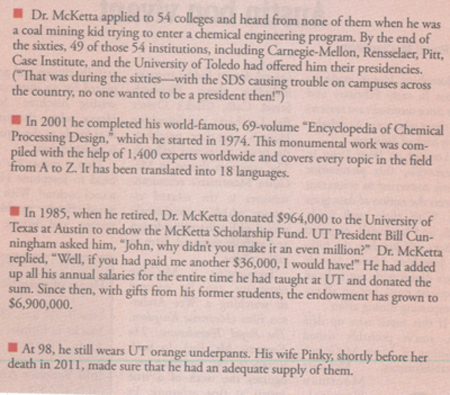 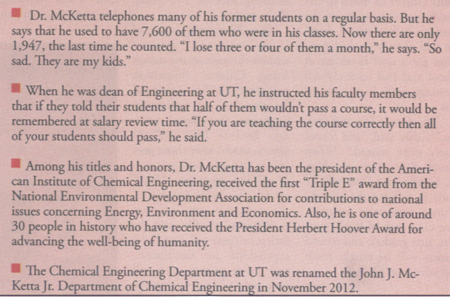 In 1903, a 14-year-old Ukrainian boy named John McKetta packed a suitcase and headed for Pennsylvania for $25, ($15 of which he gave to his father), a job in the coal mines, and a place to live.

That youngster had a lot on his mind – mainly how to survive in a new country and how to adjust to working deep underground for long hours. It’s doubtful he would have imagined his namesake son would become the world’s most prominent chemical engineer; receive the “International Chemical Engineering Award” in Venice, Italy; be one of the most revered professors ever to teach at The University of Texas, with a large academic department named after him; and serve as an energy adviser to five United States presidents. All of that would take a while.

When John, Jr., the subject of this column, was born in 1915, he faced the bleak prospect of finishing public school and then a lifetime of backbreaking work in the coal mines. That was the only career option – six days a week in the mines – the same as his father and uncle and the other men in Wyano, Pa., population 200. But before John could start the first grade, he and the other kids his age had to learn English. So they began a month early, were given primers, and they could all speak English when it was time for school to start. (“It can be done — that’s why I don’t like the idea of having double-language schools,” he says.)

For three years after he finished high school, John, Jr. went 475 feet underground into a seven-foot coal vein, six days a week.
”At least we could stand up! The men in Kentucky were in four-foot veins and had to stoop and crawl around all day,” he says.

During those three years, the most he ever made in a week was $3, based on 25 cents per ton of coal he brought out of the ground. In that era, the workers had no electric equipment to use. It was strictly pick-and-shovel manual labor.

“I hated every minute of it,” John says.

Then one day, he saw a book that changed his life. It was by a man named Porter about the process of carbonization that extracted energy from coal.

“There were people called chemical engineers who made this happen,” John says. “I wanted to be one of them.”

So he obtained a list of colleges in the country that had chemical engineering programs and determined to keep writing to them until one would accept him. With no typewriter or even a pen to use, he kept grinding out pencil-written letters.

”About the best I could do was three or four letters a night.”

Of the first 54 colleges he applied to, none even gave him the courtesy of a rejection letter. Finally, President Burton Handy of Tri-State University in Angola, Indiana wrote him back. His letter said, “If we admit you, we will provide you with a job that will help you pay for your tuition and your lodging. Please come talk to us.”

That was on a Friday. The next day, he put $10.20 in his pocket and hitchhiked across Ohio to Indiana.

“In those days, people would pick up a kid with a suitcase.”

When he arrived on Monday, he made a beeline for the registrar’s office. When he got there, he gave the receptionist his name. She flipped through her files, looked startled and said, “Oh yes, Mr. McKetta, President Handy wants to see you.”

John says that the president leaped out of his chair, came over and gave him a slap on the back. “He admired me for being willing to apply.”

The upshot of the conversation they then had was that John would have a job making twenty cents an hour, twenty hours a week. Of that $4.00 total weekly salary, he’d pay $2.00 for tuition and $2.00 for a room at a house off campus run by a lady named Mrs. Nichols.

After meeting Mrs. Nichols, and seeing his room that he’d be sharing, he decided to get a cup of coffee at a local diner. As it happened, the owner of the diner was just preparing a “Dishwasher Wanted” sign to put in his window. John asked about it and found out that it paid no money, but for every hour worked, it meant a free meal. He took the job and was just beaming over all his good fortune.

Then things got even better. He ran into a local bandleader named Ray Bodie who needed a second trumpet and John had played that instrument in the Wyano Volunteer Fire Department Band.

He told Bodie that he could sit in on Wednesday and Saturday nights, if he could find a trumpet to use. That was even more income. A year later, he started his own 12-piece band called JJKK – “Johnny Jay and the Kampus Kollegians” an, started playing gigs all over the thriving 3,000-person metropolis of Angola.

He paid himself $1.01 (sometimes $1.50) and hi musicians got 75 cents for their performances. All the while, he was diligently studying every night and he kept a coal miner’s cap on his desk for a very good reason.

“When some of the guy would ask me to go shoot pool, I’d just look at that cap and remember being in the mine and say ‘No, I have to study.”

Part 2
What can you say about a 98-year-old college professor who still goes to his office at The University of Texas at Austin three days a week, around 6 a.m. and stays for several hours to visit with researchers? Who still calls eight to ten of his former students a day -and laments how fast they are dying? And who still operates at a level of energy and good-hearted enthusiasm that would shame most 40- year-olds?

John McKetta, Jr. does all of that and more. In a recent interview with him at his apartment at Westninster Manor, where he has resided for eight years, John told me about his life. It has been quite a journey: from his post-high school years laboring in the coal mines of rural Pennsylvania to his career in chemical engineering, where he gained worldwide recognition for his teaching, research, publications and administrative ability.

He also told me about his family: his beloved wife Helen “Pinky” McKetta, who he married in 1943 and who passed away in 2011; his sons Charles, Mike and Randy and his daughter Mary Anne.

If you read part one of my column about him last week, you know that through dogged perseverance, he was accepted as a student at Tri-State University in Angola, Indiana, where he excelled in the chemical engineering program.

“The faculty members were so wonderful to me! And when I graduated, they got me job at the Michigan Alkali, CO. in Wyandotte, Michigan, near Detroit.”

His work there was exciting, but he started hearing about this company called Dow that was doing amazing things in the realm of producing chemicals from gas and oil.

Dr. George Granger Brown (or as he was jokingly called, “Great God” Brown), was a chief consultant to Dow and the chairman of the chemical engineering department at the University of Michigan. One day John drove his 1928 Ford up to meet this notable man. Soon he was a student again, working toward his Ph.D.

One night in an off-campus coffee shop, he met Pinky Smith, the love of his life. Who married him a few months later. Her name still crawls across his home office’s computer screen.

While he was at Michigan doing his Ph.D. research, John and one of his professors, Dr. Donald Katz, developed a set of tables relating to underground temperature and pressure in gas and oil wells that reveal the composition of the surrounding terrain. These McKetta and Katz tables are still in widespread use.

Partially thanks to his desire to be “where the oil and gas was underground,” he came to Texas. Besides that, Dow Chemical in Freeport was doing amazing things.

“God was with me when I decided to come to Texas and I got hired at the University in 1946.”

John would progress up the ladder at UT from assistant professor to professor, to chairman of the Department of Chemical Engineering to dean of the College of Engineering.

For a while, he was executive vice-chancellor for the UT system under Chancellor Harry Ransom. That was during the period when they were establishing UT Permian Basin, UT Dallas, UT El Paso and UT San Antonio and John was the key executive in that effort.

One conversation John recalls from his early days on the faculty is when, in 1948, he was having lunch with his colleagues in the College of Engineering and Professor Bill Cunningham (not the man who would later be president of UT) brought in a list of the top 50 engineering schools. UT wasn’t on it; Rice was number 26.

He laughs and says, “As of last year, we were number four on a similar list. For 40 years, he was on the payroll and taught at UT for another 20 years, he donated his time to teaching courses.

Also, with the $6,900,000 in the McKetta Fund which he established with a $964,000 personal gift, many outstanding students have scholarships so they concentrate on their studies. “It’s just wonderful for these students to have this financial support,” he says.

What changes has he seen in his field? He warms to the subject of bioengineering which is a topic that only recently has come to the fore.

“Forrest, when I wave my hand at you like this, there are something like 80,000 cells in my body involved. Your whole body is a chemical plant.”

Long story short, there are researchers at UT Austin who are zeroing in on being able to provide pinpointed medication to the parts of the body that cure certain diseases. John says that years ago, he went to the chairman of the board of directors of St. David’s Hospital and asked him to bring some of his MDs over to talk to the engineering faculty on a regular, voluntary basis about bioengineering.

Something like 80 percent of his engineering faculty members showed up for the talks, because they were all interested in this new field of research.

As a result, now there is a new $60,000,000 Bioengineering Building on the UT Austin campus. So what advice would he give to a student starting in engineering? First, they have to be interested in the field. And he says that there are two traits he looks for: curiosity and “judicious discontent.”

One last note – for many years, Dr. McKetta kept a miner’s cap on his UT office desk, as a reminder of how much better it is to be a professor than working in the mines. Oh – and being a Longhorn football fan to the max, he says that Mack Brown is going to have a terrific season this year.

A Journey to Greatness Started in a Coal Mine