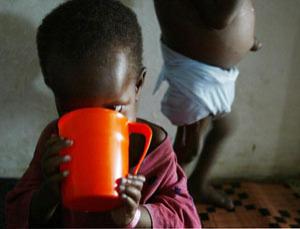 There’s more to malnutrition than poor diet. Two complementary studies suggest that microbes have an important role to play in both the onset and treatment of a poorly understood form of malnutrition called kwashiorkor.

Malnutrition, the leading cause of death among children worldwide, remains something of a puzzle. It is unclear, for instance, why some children are especially prone to becoming malnourished when siblings they live with appear to fare better.

Now Jeffrey Gordon at Washington University in St Louis, Missouri, and his colleagues have found that a child’s risk of malnutrition may come down to the microbes in his or her guts.

Working in southern Malawi, the team identified sets of identical and non-identical twins in which one child had kwashiorkor – thought to be caused by a lack of protein – and the other did not, despite the shared genetics and diet. Gordon’s team took faecal samples from three sets of twins and transplanted the samples into the guts of mice, which were then fed a typical nutrient-poor Malawian diet.

Mouse weight lossAll of the mice lost some weight. However, some lost significantly more weight, and more quickly, than others. Further investigation showed that these mice had all received a faecal sample from children with kwashiorkor.

The finding strongly hinted that the mice had picked up a kwashiorkor-like condition from the microbes within the faecal implant, so the researchers studied the rodents’ gut flora. They found higher than normal levels of bacteria associated with illnesses such as inflammatory bowel disease.

The results suggest pathogenic microbes may heighten the problems of malnutrition in some children, says Jeremy Nicholson at Imperial College London, a member of the study team. “There’s a lot of work revolving around obesogenesis – how given a standard diet one set of bugs might make more calories available than another set,” he says. “But the other side of that coin is that maybe particular bugs can restrict calorie availability and exacerbate a poor diet.”

Indi Trehan at Washington University, another member of the research team, agrees. “I think it is correct that there are more factors than simple food insecurity at play in terms of malnutrition,” he says.

Antibiotic aidTrehan is lead author on a second new study, which examines how children with kwashiorkor respond when given nutrient-rich therapeutic diets. Trehan’s team found that the children were significantly less likely to become malnourished once the dietary treatment had ended if they were given a course of antibiotics along with the diet.

Together, the studies help us understand the role that infections might play in malnutrition, says Trehan. This might point towards a future in which microbial concoctions can be tailored to guard against such infections and treat specific conditions, suggests Nicholson.

Alexander Khoruts at the University of Minnesota in Minneapolis has been using faecal transplants to treat resistant Clostridium difficile disease in humans. “It is likely that microbiota are involved in pathogenesis of many other diseases, and it is possible that faecal transplants may be an approach to treat those as well,” he says. But because gut bacteria are so complex, he thinks more research will be needed to develop appropriate microbe-based therapies.