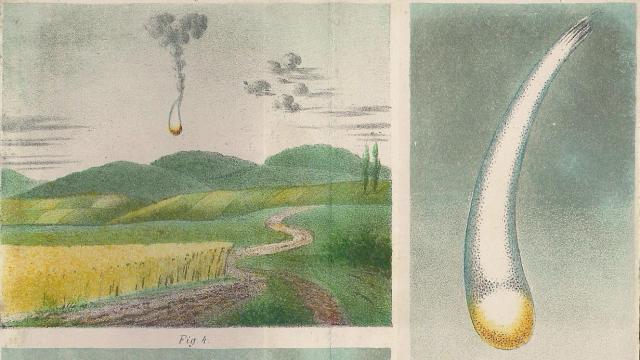 A drawing of a meteorite falling in Ukraine in 1866.

A team of scientists think they’ve found the oldest evidence of a meteorite striking and killing a person, according to a new report published in the journal journal Meteoritics & Planetary Science.

Given the hype around space rocks hitting Earth, there are surprisingly few records of meteorites striking people, much less killing anyone. But scientists at the Ego University and Trakya University in Turkey and the SETI Institute in the United States found a 1888 record from General Directorate of State Archives of the Presidency of the Republic of Turkey that contains three manuscripts that seem to recount a death-by-meteorite event.

The first manuscript, written on September 13, 1888, details a fireball occurring the month before in the evening, over a village whose exact location the scientists couldn’t determine. Smoke and fire accompanied the flash, and meteorites rained from the sky for 10 minutes. One man died and another was injured and paralyzed as a result of the event. A second manuscript contained a request forwarded to Sultan Abdul Hamid II asking what should be done about the event. A third also recounts the events and mentions that a man named Ahmed Munir Pasha sent a letter with “a stone piece” to the Grand Vizier.

Basically, on August 22, 1888, a meteor exploded over a village in Turkey, killing one man and paralyzing another. On September 13, a local legislator reported the event; the central government heard about it on October 8; and the sultan heard about it on October 9, according to the translations in the new paper, titled “Earliest evidence of a death and injury by a meteorite.”

Translating these documents came with its challenges—Ottoman Turkish is difficult to read, the scientists explained. The researchers noted that there are still a lot more records awaiting digitization, and they don’t have any physical evidence of the 1888 impact. Regardless, this would be the earliest known record definitively stating that a meteorite killed someone.

Meteorite deaths are exceedingly rare. Most recently, a bus driver in India named V. Kamaraj died in an apparent meteorite strike in Natrampalli back in 2016, though scientific experts, including at NASA, refuted the claim. The National Resource Council estimates that 91 people should die in meteorite-related accidents every year, but there aren’t records of these deaths. Injury-by-meteorite is perhaps more common—over 1,600 people were injured when a meteor fell over Chelyabinsk in Russia in 2013, and famously, Ann Hewlett Hodges was hit and slightly hurt by a meteorite in Alabama in 1954.

Earth is big enough that the odds of dying from a meteorite impact are exceedingly slim.