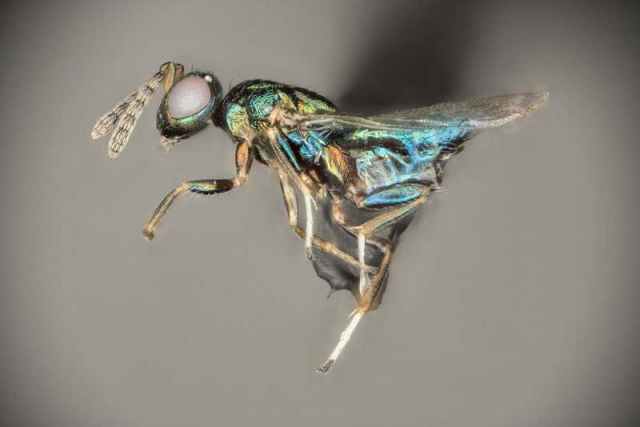 A recently discovered parasitic wasp appears to have extraordinary mind-controlling abilities – it can alter the behaviour of at least seven other species.

Many parasites manipulate the behaviour of their victims in extraordinary ways. For instance, sacculina barnacles invade crabs and make them care for barnacle larvae as if they were their own offspring. If the host crab is male, the parasite turns them female.

It was thought each species of parasite could manipulate the behaviour of only one host, or least only very closely related species. But the crypt-keeper wasp Euderus set is more versatile.

It parasitises other wasps called gall wasps. Gall wasps lay their eggs in plants, triggering abnormal growths – galls – inside which the wasp larvae feed and grow. Adult gall wasps chew their way out of the gall and fly off.

The crypt-keeper wasp seeks out oak galls and lays an egg inside them. The crypt-keeper larva then attacks the gall wasp larva. Infected gall wasps still start chewing their way out of the gall, but they stop chewing when the hole is still small and then remain where they are with their head blocking the exit and thus protecting the larva growing inside them – “keeping the crypt”.

How the crypt-keeper larva makes the gall wasp stop chewing at such a precise point is not clear. “I’d love to know how they do it,” says Anna Ward of the University of Iowa.

When the crypt-keeper larva turns into an adult wasp after a few days, it then chews through the head of the gall wasp to get out of the gall.

The crypt-keeper wasp, which was only described in 2017, was thought to parasitise just one species. But when Ward’s team collected 23,000 galls from 10 kinds of oak trees as part of a bigger study, they found at least 7 of the 100 species of gall wasp they collected were parasitised by the same crypt-keeper wasp. “What we found is that it is attacking different hosts that don’t seem to be closely related,” says Ward.