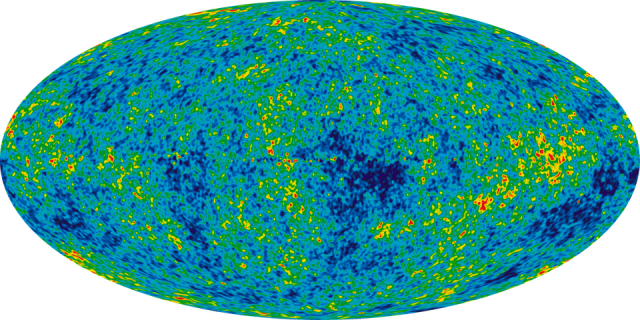 The detailed, all-sky picture of the infant universe created from nine years of WMAP data. The image reveals 13.77 billion year old temperature fluctuations (shown as color differences) that correspond to the seeds that grew to become the galaxies. The signal from our galaxy was subtracted using the multi-frequency data. This image shows a temperature range of ± 200 microKelvin.CREDIT: NASA/WMAP SCIENCE TEAM

In a study published earlier this month, a team of theoretical physicists is claiming to have discovered the remnants of previous universes hidden within the leftover radiation from the Big Bang. Our universe is a vast collection of observable matter, like gas, dust, stars, etc., in addition to the ever-elusive dark matter and dark energy. In some sense, this universe is all we know, and even then, we can only directly study about 5% of it, leaving 95% a mystery that scientists are actively working to solve. However, this group of physicists is arguing that our universe isn’t alone; it’s just one in a long line of universes that are born, grow, and die. Among these scientists is mathematical physicist Roger Penrose, who worked closely with Stephen Hawking and currently is the Emeritus Rouse Ball Professor of Mathematics at Oxford University. Penrose and his collaborators follow a cosmological theory called conformal cyclic cosmology (CCC) in which universes, much like human beings, come into existence, expand, and then perish.

As a universe ages, it expands, and the constituent parts grow farther and farther apart from each other. Consequently, the interactions between galaxies that drive star formation and evolution become rarer. Eventually, the stars die out, and the remaining gas and dust is captured by black holes. In one of his most famous theories, Stephen Hawking proposed that this isn’t the end; black holes might have a way to slowly lose mass and energy by radiating certain particles. So, after many eons, the remaining black holes in the universe would disappear, leaving only disparate particles. Seemingly a wasteland, this end-state eventually mirrors the environment of our universe’s birth, and so, the cycle starts anew.

When our universe was very young, before any recognizable components like stars, planets, or galaxies formed, it was filled with a dense, hot soup of plasma. As the universe expanded, it cooled, and eventually, particles could combine to form atoms. Eventually, the interaction and fusion of these atoms resulted in all of the matter that we observe today. However, we can still observe the leftover radiation from that initial, dense period in our universe’s history. This leftover glow, called the Cosmic Microwave Background (CMB), is the oldest electromagnetic radiation, and it fills the entirety of our universe. If the CCC theory were true, then there would be hints of previous universes in our universe’s CMB.

At the end of a universe, when those final black holes dissolve, CCC theory states they should leave behind a signature that would survive the death of that universe and persist into the next. Although not definitive proof of previous universes, detecting that signature would be strong evidence in support of CCC theory. In searching for these “Hawking points”, cosmologists face a difficult obstacle as the CMB is faint and varies randomly. However, Penrose is claiming that a comparison between a model CMB with Hawking points and actual data from our CMB has proven that Hawking points actually exist. If true, this would be the first-ever detection of evidence from another universe.

Unfortunately, as groundbreaking as this discovery seems, the scientific community has largely dismissed it. One of the fundamental characteristics of the CMB is that, although it has patterns, the variations are entirely statistically random. In fact, Penrose’s former collaborator, Stephen Hawking, spotted his own initials in the CMB while others have found a deer, a parrot, and numerous other recognizable shapes in the noise. Similarly, the Wilkinson Anisotropy Microscope Probe that mapped the CMB released an interactive image where you can search for familiar shapes and patterns. An avoidable result of both these random fluctuations and the sheer size of the CMB is that if scientists look hard enough, they can find whatever pattern they need, like the existence of Hawking points, perhaps. Another criticism of Penrose’s claim is that if CCC theory holds true, our universe should have tens of thousands of Hawking points in the CMB. Regrettably, Penrose could find only about 20.

Still, the possibility of alternate universes, whether long-dead or existing in parallel to our own, is tantalizing. Many other theories also claim to find traces of other universes hiding in the patterns of the CMB as well. Although it sounds like science fiction, we are left to wonder: is this just the cosmological equivalent of seeing shapes in random clouds or will scientists one day discover that we are one among many infinite universes?

Jesse Shanahan is an astrophysicist, EMT, and science communicator. For more space and language news, follow her on Twitter here.