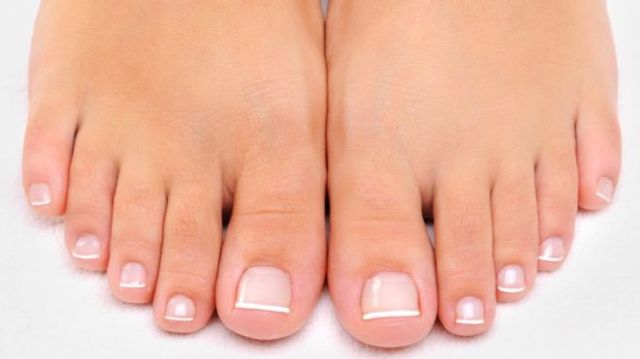 As our early ancestors began to walk on two legs, they would also have hung about in trees, using their feet to grasp branches. They walked differently on the ground, but were still able to move around quite efficiently. The rigid big toe that eventually evolved gives efficient push-off power during walking and running.

The findings have been published in the journal Proceedings of the National Academy of Sciences.

In this new study, scientists made 3D scans of the toe bone joints from living and fossil human relatives, including primates such as apes and monkeys, and then compared them to modern day humans.

They overlaid this information onto an evolutionary tree, revealing the timing and sequence of events that produced the human forefoot.

The main finding is that the current shape of the bones in the big toe, or “hallux” in anatomical language, must have evolved quite late in comparison with the rest of the bones that they investigated.

In an interview with the BBC, lead author of the study Dr Peter Fernandez, from Marquette University in Milwaukee, said: “Our ability to efficiently walk and run on two feet, or be ‘bipedal’, is a crucial feature that enabled humans to become what they are today. For everything to work together, the foot bones first had to evolve to accommodate the unique biomechanical demands of bipedalism”.

He then said: “The big toe is mechanically very important for walking. In our study, we showed that it did not reach its modern form until considerably later than the other toes.”

When asked whether the rigid big toe evolved last because it is most or least important, Dr Fernandez commented: “It might have been last because it was the hardest to change. We also think there was a compromise. The big toe could still be used for grasping, as our ancestors spent a fair amount of their time in the trees, before becoming fully committed to walking on the ground.”

He added: “Modern humans have increased the stability of the joint to put the toe in an orientation that is useful for walking, but the foot is no longer dextrous like an ape.”vvvv

The reason that our ancestors stood upright and then walked on two feet is still a mystery, but there are plenty of ideas. Scientists think that walking may have evolved, either because it freed our hands to carry tools, or because climate change led to a loss of forests, or that overhead arms can be used to support walking on two legs along thin branches.

Studies such as this new one show that early human ancestors must have able been to walk upright for millions of years, since the 4.4 million year old fossil Ardipithecus ramidus, but that they did not fully transition to a modern walk until much later, perhaps in closer relatives within our own group, Homo.

This new study, alongside other work, now confirms that early walking humans, or “hominins” still used their feet to grasp objects.

Dr William Harcourt-Smith from City University of New York, who was not involved in this study, said: “They are suggesting that one of the earliest hominins, Ardipithecus, was already adapting in a direction away from the predicted morphology of the last common ancestor of chimps and modern humans, but not ‘towards’ modern humans. To me this implies that there were several lineages within hominins that were likely experimenting with bipedalism in different ways to each other.”

Professor Fred Spoor, an expert in human anatomy at the Natural History Museum, London said: “It was a bit of shock when hominins were found that have a grasping, or opposable, big toe, as this was thought to be incompatible with effective bipedalism. This work shows that different parts of the foot can have different functions. When a big toe is opposable, you can still function properly as a biped.”

The scientists involved say that this work shows that early hominin feet had a mixed and versatile set of functions. Becoming human was not a giant step, but a series of gradual changes, with some of the last and arguably most important changes being made to big toes. Peter Fernandez said that they would like to conduct similar analyses on the remaining bones of the forefoot, in order to fully characterise the changes involved in the evolution of bipedal walking.