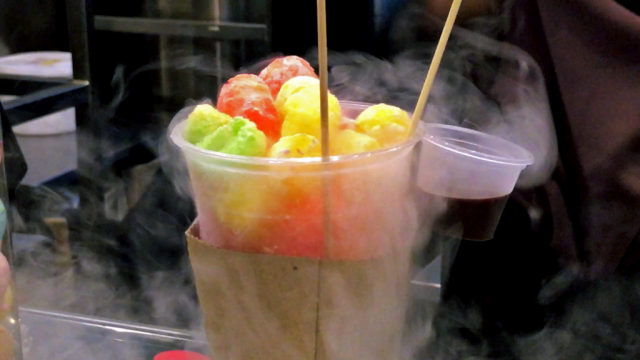 A trendy new treat called “Dragon’s Breath” is popping up in malls across the country. But don’t get burned, a local doctor warned. The dessert tastes like Froot Loops cereal and it’s dipped in liquid nitrogen, so that when you eat it — you can puff out “smoke” like a dragon.

While it may seem like a cool experience, there are already reports of injuries. A Florida mother says her son was rushed to the hospital after the frosty treat triggered a severe asthma attack. Rachael McKenny’s Facebook post garnered more 80,000 shares in less than a week.

The concern is not just for people with asthma.

“Any kind of contact with the liquid nitrogen before it turns into the gas — You’re going to be at risk of getting burns if it touches any part of the body,” said Dr. Kristie Ross, Director of Pediatric Pulmonology at UH Rainbow Babies and Children’s Hospital.

Liquid nitrogen can be as cold as negative 320F degrees. Last year, a 14-year-old girl reportedly burned her hand while handling the dessert. A man in India burned a hole in his stomach after drinking a cocktail with liquid nitrogen.

Dr. Ross warns that if liquid nitrogen is used in an area that is not well-ventilated, it displaces oxygen, which can lead to suffocation. She also expressed concern over a lack of regulation over liquid nitrogen in consumer food use.

“Liquid nitrogen is a highly regulated chemical in the medical field,” said Dr. Ross. “We have to use gloves, protective masks, and protective goggles. I’m surprised that it’s used like this for food,” she said.

In 2016 the Association of Food and Drug Officials issued a resolution urging the Food and Drug Administration to clarify its policy position on liquid nitrogen used as food and beverage ingredients, and the need for appropriate regulatory intervention.

But it appears that government regulations have not caught up with popular trends.