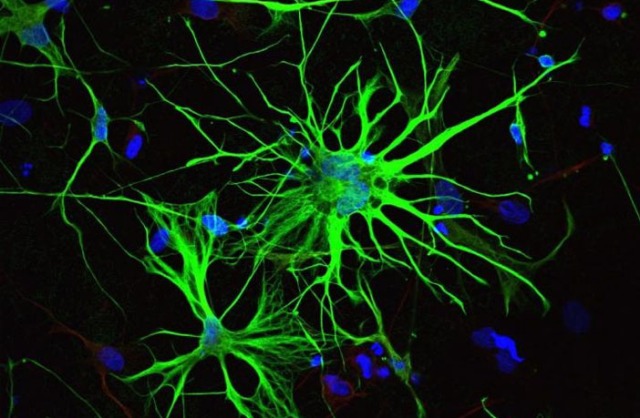 A study by scientists of the German Center for Neurodegenerative Diseases (DZNE) points to a novel potential approach against Alzheimer’s disease. In studies in mice, the researchers were able to show that blocking a particular receptor located on astrocytes normalized brain function and improved memory performance. Astrocytes are star-shaped, non-neuronal cells involved in the regulation of brain activity and blood flow. The findings are published in the Journal of Experimental Medicine (JEM).

Alzheimer’s disease is a common and currently incurable brain disorder leading to dementia, whose mechanisms remain incompletely understood. The disease appears to be sustained by a combination of factors that include pathological changes in blood flow, neuroinflammation and detrimental changes in brain cell activity.

“The brain contains different types of cells including neurons and astrocytes”, explains Dr. Nicole Reichenbach, a postdoc researcher at the DZNE and first author of the paper published in JEM. “Astrocytes support brain function and shape the communication between neurons, called synaptic transmission, by releasing a variety of messenger proteins. They also provide metabolic and structural support and contribute to the regulation of blood flow in the brain.”

Similar to neurons, astrocytes are organized into functional networks that may involve thousands of cells. “For normal brain function, it is crucial that networks of brain cells coordinate their firing rates. It’s like in a symphony orchestra where the instruments have to be correctly tuned and the musicians have to stay in synchrony in order to play the right melody”, says Professor Gabor Petzold, a research group leader at the DZNE and supervisor of the current study. “Interestingly, one of the main jobs of astrocytes is very similar to this: to keep neurons healthy and to help maintain neuronal network function. However, in Alzheimer’s disease, there is aberrant activity of these networks. Many cells are hyperactive, including neurons and astrocytes. Hence, understanding the role of astrocytes, and targeting such network dysfunctions, holds a strong potential for treating Alzheimer’s.”

Petzold and colleagues tested this approach in an experimental study involving mice. Due to a genetic disposition, these rodents exhibited certain symptoms of Alzheimer’s similar to those that manifest in humans with the disease. In the brain, this included pathological deposits of proteins known as “Amyloid-beta plaques” and aberrant network activity. In addition, the mice showed impaired learning ability and memory.

In their study, the DZNE scientists targeted a cell membrane receptor called P2Y1R, which is predominately expressed by astrocytes. Previous experiments by Petzold and colleagues had revealed that activation of this receptor triggers cellular hyperactivity in mouse models of Alzheimer’s. Therefore, the researchers treated groups of mice with different P2Y1R antagonists. These chemical compounds can bind to the receptor, thus switching it off. The treatment lasted for several weeks.

“We found that long-term treatment with these drugs normalized the brain’s network activity. Furthermore, the mice’s learning ability and memory greatly improved”, Petzold says. On the other hand, in a control group of wild type mice this treatment had no significant effect on astrocyte activity. “This indicates that P2Y1R inhibition acts quite specifically. It does not dampen network activity when pathological hyperactivity is absent.”

New approaches for research and therapies?

Petzold summarizes: “This is an experimental study that is currently not directly applicable to human patients. However, our results suggest that astrocytes, as important safeguards of neuronal health and normal network function, may hold the potential for novel treatment options in Alzheimer’s disease.” In future studies, the scientists intend to identify additional novel pathways in astrocytes and other cells as potential drug targets.