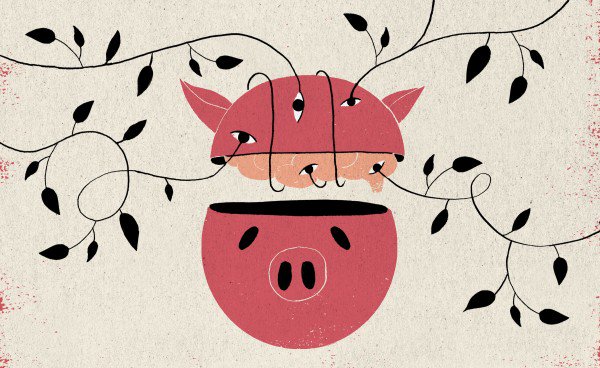 In a step that could change the definition of death, researchers have restored circulation to the brains of decapitated pigs and kept the reanimated organs alive for as long as 36 hours.

The feat offers scientists a new way to study intact brains in the lab in stunning detail. But it also inaugurates a bizarre new possibility in life extension, should human brains ever be kept on life support outside the body.

The work was described on March 28 at a meeting held at the National Institutes of Health to investigate ethical issues arising as US neuroscience centers explore the limits of brain science.

During the event, Yale University neuroscientist Nenad Sestan disclosed that a team he leads had experimented on between 100 and 200 pig brains obtained from a slaughterhouse, restoring their circulation using a system of pumps, heaters, and bags of artificial blood warmed to body temperature.

There was no evidence that the disembodied pig brains regained consciousness. However, in what Sestan termed a “mind-boggling” and “unexpected” result, billions of individual cells in the brains were found to be healthy and capable of normal activity.

Reached by telephone yesterday, Sestan declined to elaborate, saying he had submitted the results for publication in a scholarly journal and had not intended for his remarks to become public.

Since last spring, however, a widening circle of scientists and bioethicists have been buzzing about the Yale research, which involves a breakthrough in restoring micro-circulation—the flow of oxygen to small blood vessels, including those deep in the brain.

“These brains may be damaged, but if the cells are alive, it’s a living organ,” says Steve Hyman, director of psychiatric research at the Broad Institute in Cambridge, Massachusetts, who was among those briefed on the work. “It’s at the extreme of technical know-how, but not that different from preserving a kidney.”

Hyman says the similarity to techniques for preserving organs like hearts or lungs for transplant could cause some to mistakenly view the technology as a way to avoid death. “It may come to the point that instead of people saying ‘Freeze my brain,’ they say ‘Hook me up and find me a body,’” says Hyman.

Such hopes are misplaced, at least for now. Transplanting a brain into a new body “is not remotely possible,” according to Hyman.

Brain in a bucket

The Yale system, called BrainEx, involves connecting a brain to a closed loop of tubes and reservoirs that circulate a red perfusion fluid, which is able to carry oxygen to the brain stem, the cerebellar artery, and areas deep in the center of the brain.

In his presentation to the NIH officials and ethics experts, Sestan said the technique was likely to work in any species, including primates. “This is probably not unique to pigs,” he said.

The Yale researchers, who began work on the technique about four years ago and are seeking NIH funding for it, acted out of a desire to construct a comprehensive atlas of connections between human brain cells.

Some of these connections probably span large regions of the brain and would thus be traced more easily in a complete, intact organ.

Sestan acknowledged that surgeons at Yale had already asked him if the brain-preserving technology could have medical uses. Disembodied human brains, he said, could become guinea pigs for testing exotic cancer cures and speculative Alzheimer’s treatments too dangerous to try on the living.

The setup, jokingly dubbed the “brain in a bucket,” would quickly raise serious ethical and legal questions if it were tried on a human.

For instance, if a person’s brain were reanimated outside the body, would that person awake in what would amount to the ultimate sensory deprivation chamber, without ears, eyes, or a way to communicate? Would someone retain memories, an identity, or legal rights? Could researchers ethically dissect or dispose of such a brain?

Also, because federal safety regulations apply to people, not “dead” tissues, it is uncertain whether the US Food and Drug Administration would have any say over whether scientists could attempt such a reanimation procedure.

“There are going to be a lot of weird questions even if it isn’t a brain in a box,” said an advisor to the NIH who didn’t wish to speak on the record. “I think a lot of people are going to start going to slaughterhouses to get heads and figure it out.”

Sestan said he was concerned about how the technology would be received by the public and by his peers. “People are fascinated. We have to be careful how fascinated,” he said.

It’s well known that a comatose brain can be kept alive for at least decades. That is the case with brain-dead people whose families elect to keep them attached to ventilating machines.

Less well explored are artificial means of maintaining a brain wholly separated from its body. There have been previous attempts, including a 1993 report involving rodents, but Sestan’s team is the first to achieve it with a large mammal, without using cold temperatures, and with such promising results.

At first, the Yale group was uncertain if an “ex vivo” brain to which circulation was restored would regain consciousness. To answer that question, the scientists checked for signs of complex activity in the pig brains using a version of EEG, or electrodes placed on the brain’s surface. These can pick up electrical waves reflecting broad brain activity indicating thoughts and sensations.

Initially, Sestan said, they believed they had found such signals, generating both alarm and excitement in the lab, but they later determined that those signals were artifacts created by nearby equipment.

Sestan now says the organs produce a flat brain wave equivalent to a comatose state, although the tissue itself “looks surprisingly great” and, once it’s dissected, the cells produce normal-seeming patterns.

The lack of wider electrical activity could be irreversible if it is due to damage and cell death. The pigs’ brains were attached to the BrainEx device roughly four hours after the animals were decapitated.

However, it could also be due to chemicals the Yale team added to the blood replacement to prevent swelling, which also severely dampen the activity of neurons. “You have to understand that we have so many channel blockers in our solution,” Sestan told the NIH. “This is probably the explanation why we don’t get [any] signal.”

Sestan told the NIH it is conceivable that the brains could be kept alive indefinitely and that steps could be attempted to restore awareness. He said his team had elected not to attempt either because “this is uncharted territory.”

“That animal brain is not aware of anything, I am very confident of that,” Sestan said, although he expressed concern over how the technique might be used by others in the future. “Hypothetically, somebody takes this technology, makes it better, and restores someone’s [brain] activity. That is restoring a human being. If that person has memory, I would be freaking out completely.”

Consciousness isn’t necessary for the type of experiments on brain connections that scientists hope to carry out on living ex vivo brains. “The EEG brain activity is a flat line, but a lot of other things keep on ticking,” says Anna Devor, a neuroscientist at the University of California, San Diego, who is familiar with the Yale project.

Devor thinks the ability to work on intact, living brains would be “very nice” for scientists working to build a brain atlas. “The whole question of death is a gray zone,” she says. “But we need to remember the isolated brain is not the same as other organs, and we need to treat it with the same level of respect that we give to an animal.”

Today in the journal Nature, 17 neuroscientists and bioethicists, including Sestan, published an editorial arguing that experiments on human brain tissue may require special protections and rules.

They identified three categories of “brain surrogates” that provoke new concerns. These include brain organoids (blobs of nerve tissue the size of a rice grain), human-animal chimeras (mice with human brain tissue added), and ex vivo human brain tissue (such as chunks of brain removed during surgery).

They went on to suggest a variety of ethical safety measures, such as drugging animals that possess human brain cells so they stay in a “comatose-like brain state.”

Hyman, who also signed the letter, says he did so reluctantly, because he thinks most of the scenarios are exaggerated or unlikely. It’s hardly possible a tiny brain organoid will feel or think anything, he says.

The one type of research he thinks may call for quick action to set up rules of the road is Sestan’s unpublished brain preservation technique (which the Nature editorial did not discuss). “If people want to keep human brains alive post mortem, that is a more pressing and realistic problem,” says Hyman. “Given that it is possible with a pig brain, there should be guidelines for human tissue.”