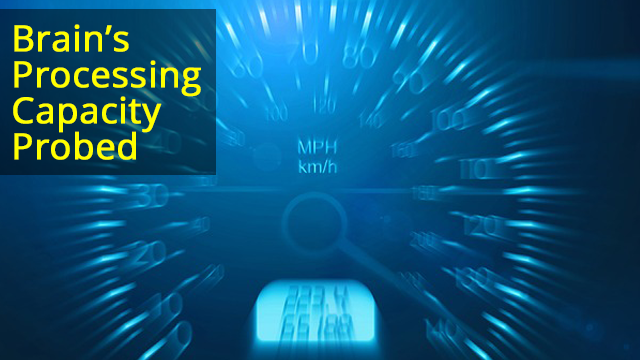 Everyday experience makes it obvious – sometimes frustratingly so – that our working memory capacity is limited. We can only keep so many things consciously in mind at once. The results of a new study may explain why: They suggest that the “coupling,” or synchrony, of brain waves among three key regions breaks down in specific ways when visual working memory load becomes too much to handle.

“When you reach capacity there is a loss of feedback coupling,” said senior author Earl Miller, Picower Professor of Neuroscience at MIT’s Picower Institute for Learning and Memory. That loss of synchrony means the regions can no longer communicate with each other to sustain working memory.

Understanding what causes working memory to have an intrinsic limit is therefore important because it could help explain the limited nature of conscious thought and optimal cognitive performance, Miller said.

And because certain psychiatric disorders can lower capacity, said Miller and lead author Dimitris Pinotsis, a research affiliate in Miller’s lab, the findings could also explain more about how such disorders interfere with thinking.

“Studies show that peak load is lower in schizophrenics and other patients with neurological or psychiatric diseases and disorders compared to healthy people,” Pinotsis said. “Thus, understanding brain signals at peak load can also help us understand the origins of cognitive impairments.”

The study’s other author is Timothy Buschman, assistant professor at the Princeton University Neuroscience Institute and a former member of the Miller lab.

The new study published in the journal Cerebral Cortex is a detailed statistical analysis of data the Miller lab recorded when animal subjects played a simple game: They had to spot the difference when they were shown a set of squares on a screen and then, after a brief blank screen, a nearly identical set in which one square had changed color. The number of squares involved, hence the working memory load of each round, varied so that sometimes the task exceeded the animals’ capacity.

As the animals played, the researchers measured the frequency and timing of brain waves produced by ensembles of neurons in three regions presumed to have an important – though as yet unknown – relationship in producing visual working memory: the prefrontal cortex (PFC), the frontal eye fields (FEF), and the lateral intraparietal area (LIP).

The researchers’ goal was to characterize the crosstalk among these three areas, as reflected by patterns in the brain waves, and to understand specifically how that might change as load increased to the point where it exceeded capacity.

Though the researchers focused on these three areas, they didn’t know how they might work with each other. Using sophisticated mathematical techniques, they tested scores of varieties of how the regions “couple,” or synchronize, at high- and low-frequencies. The “winning” structure was whichever one best fit the experimental evidence.

“It was very open ended,” Miller said. “We modeled all different combinations of feedback and feedforward signals among the areas and waited to see where the data would lead.”

They found that the regions essentially work as a committee, without much hierarchy, to keep working memory going. They also found changes as load approached and then exceeded capacity.

“At peak memory load, the brain signals that maintain memories and guide actions based on these memories, reach their maximum,” Pinotsis said. “Above this peak, the same signals break down.”

In particular, above capacity the PFC’s coupling to other regions at low frequency stopped, Miller said.

Other research suggests that the PFC’s role might be to employ low-frequency waves to provide the feedback the keeps the working memory system in synch. When that signal breaks down, Miller said, the whole enterprise may as well. That may explain why memory capacity has a finite limit. In prior studies, he said, his lab has observed that the information in neurons degrades as load increases, but there wasn’t an obvious cut-off where working memory would just stop functioning.

“We knew that stimulus load degrades processing in these areas, but we hadn’t seen any distinct change that correlated with reaching capacity,” he said. “But we did see this with feedback coupling. It drops off when the subjects exceeded their capacity. The PFC stops providing feedback coupling to the FEF and LIP.”

Two sides to the story

Because the study game purposely varied where the squares appeared on the left or right side of the visual field, the data also added more evidence for a discovery Miller and colleagues first reported back in 2009: Visual working memory is distinct for each side of the visual field. People have independent capacities on their left and their right, research has confirmed.

The Miller Lab is now working on a new study that tracks how the three regions interact when working memory information must be shared across the visual field.

The insights Miller’s lab has produced into visual working memory led him to start the company SplitSage , which last month earned a patent for technology to measure people’s positional differences in visual working memory capacity. The company hopes to use insights from Miller’s research to optimize heads-up displays in cars and to develop diagnostic tests for disorders like dementia among other applications. Miller is the company’s chief scientist and Buschman is chair of the advisory board.

The more scientists learn about how working memory works, and more generally about how brain waves synchronize higher level cognitive functions, the more ways they may be able to apply that knowledge to help people, Miller said.

This article has been republished from materials provided by The Picower Institute for Learning and Memory. Note: material may have been edited for length and content. For further information, please contact the cited source.