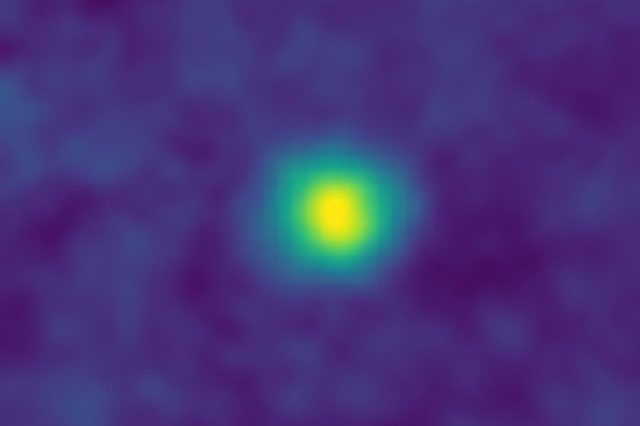 NASA’s New Horizons spacecraft is now one of the most distant human-made objects, and it just took the most distant photograph ever. The image of an icy rock in the Kuiper belt has had colour added to increase the contrast.

After its visit to Pluto, the spacecraft headed out toward the Kuiper belt on its way to its next target, a Kuiper belt object (KBO) called 2014 MU69. It is now about 41 times as far from Earth as Earth is from the sun. There are only four spacecraft that have ever traveled that far from home: Voyager 1 and 2, and Pioneer 10 and 11.

But New Horizons is the first to send back a picture for so far afield. Its four predecessors did not send back images because their cameras were shut down before they got that far away.

New Horizons is still on an active mission to visit the Kuiper Belt. During its voyage to the outer reaches of the solar system, the spacecraft usually stays in hibernation mode to conserve energy. Every once in a while, its mission operators turn on its camera to take a few pictures and calibrations and beam them back to Earth.

The last time they did this was 5 December, when New Horizons took a routine calibration image of a cluster of stars, breaking a record for the most distant photograph ever taken. Two hours later, it broke the record again with two images of KBOs that are also the closest-up image ever taken of any such object. From here on out, every image it sends back will be the most distant image ever sent back.