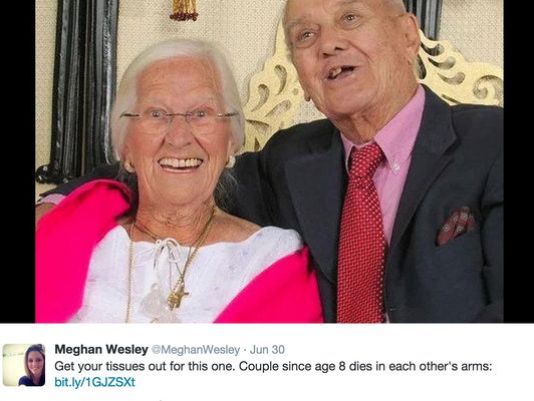 A California couple, married for three-quarters of a century, took their “til death do us part” vow seriously, passing away in each other’s arms last month.

Jeanette and Alexander Toczko were born in 1919, met when they were just 8 years old and fell in love immediately, their children told KGTV in San Diego.

The couple married in 1940 and moved to San Diego in 1970, according to their daughter, Aimee Toczko-Cushman. She told KGTV that her parents couldn’t bear the thought of being apart and said they hoped to one day die in their bed, holding hands.

“Their hearts beat as one from as long as I can remember,” Toczko-Cushman said.

Until recently Alexander, 95, was healthy and playing golf every day, their son, Richard Toczko, told the news station.

“He must have fallen. He broke his hip,” Toczko said. He told KGTV that his father never fully recovered and his health began fading quickly.

Unwilling to keep their parents apart, they had hospice bring Alexander Toczko’s bed into the couple’s home and place it beside his wife.

“And he died in her arms, which is exactly what he wanted,” Toczko-Cushman told KGTV. “I went in there and told my mother he was gone; she hugged him and she said, ‘See this is what you wanted. You died in my arms, and I love you. I love you, wait for me, I’ll be there soon.’ ”

Within 24 hours, she passed away, holding her husband’s hand.

The couple was buried on June 29.