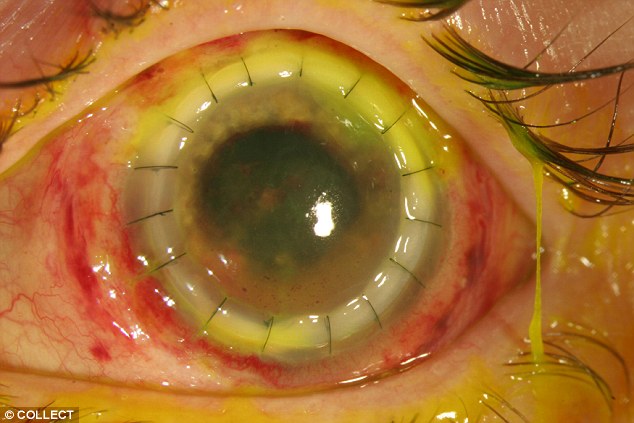 A student in Taiwan who kept a pair of disposable contact lenses in her eyes for six months has been left blinded after a microscopic bug devoured her eyeballs.

The tiny single-cell amoeba ate away at undergraduate Lian Kao’s sight because she didn’t take out and clean the contacts once during that time.

As well as being regularly cleaned, contact lenses should also be removed when swimming and washing.

The general advice is to avoid wearing contacts for more than eight hours a day.

Yet apparently 23-year-old Kao had even kept her contact lenses in at all times, even at the swimming pool.

Medics were horrified when they removed the contact lenses to find that the surface of the girl’s eyes had literally been eaten by the amoeba that had been able to breed in the perfect conditions that existed between the contact lens and the eye.

The director of ophthalmology at Taipei’s Wan Fang Hospital, Wu Jian-liang, said: ‘Contact lens wearers are a high-risk group that can easily be exposed to eye diseases.

‘A shortage of oxygen can destroy the surface of the epithelial tissue, creating tiny wounds into which the bacteria can easily infect, spreading to the rest of the eye and providing a perfect breeding ground.

‘The girl should have thrown the contact lenses away after a month but instead she overused them and has now permanently damaged her corneas.’

He said that she had been diagnosed with acanthamoeba keratitis, which although rare was always more common in the summer.

He confirmed and spoke about the girl’s case as a way of urging others to be more careful if they had to use contact lenses.

The problem is the condition can build up over several years – it’s only when it gets to an advanced stage that contacts wearers become aware of a problem, as that’s when it will cause red, irritated eyes, by which time it may be too late.

Acanthamoeba bugs stick to contact lenses and can then burrow their way through the cornea, causing acute pain.

It’s only at this stage that a sufferer would be aware they had a problem.

Prescription drugs may be able to treat the bug in the early stages, but specialists say it is very difficult to get rid of. In serious cases, the patient needs a corneal transplant but these have a high failure rate, resulting in sight loss.

Other steps to prevent the infection include never swimming or using a hot tub or shower when wearing contacts.

Each year, infections cause around 6,000 cases of a severe eye condition known as microbial keratitis – inflammation and ulceration of the cornea that can lead to vision loss.

Contact lens wearers are at a higher risk, since bacteria can get trapped in the lenses.

Thanks to Pete Cuomo for bringing this to the attention of the It’s Interesting community.