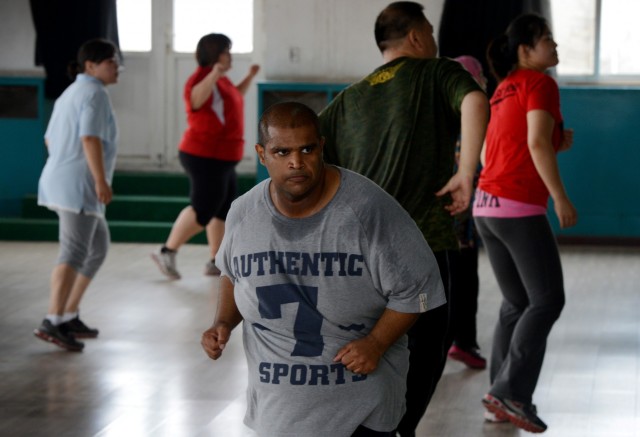 There’s been a fast growing body of evidence in the last several years that lack of exercise – or sedentariness – is a major risk factor in health. It’s been linked to heart disease, cancer, and to an early death. And now, a new study finds that lack of exercise may actually be even more of a risk than obesity in early mortality: The researchers calculate that a sedentary lifestyle may actually confer twice the risk of death as being obese. That said, the two are both important and, luckily, closely related: So if you start getting active, you’ll probably lose a little weight along the way, which itself is a very good thing.

The new study looked at data from over 334,000 people who participated in the European Prospective Investigation into Cancer and Nutrition (EPIC) Study. Over a period of 12 years, the participants’ height, weight, and waist circumferences were tracked, along with self-reports of activity levels, both at work and in free time. All-cause mortality (i.e., death from any cause) was the main outcome of interest.

It turned out that lack of physical activity was linked to the greatest risk of death – and the greatest reduction in death risk was in the difference between the lowest two activity groups. In other words, just moving from “inactive” to “moderately inactive” showed the largest reduction in death risk, especially for normal weight people, but true for people of all body weights. And, the authors say, just taking a brisk 20-minute walk per day can move you from one category to the other, and reduce the risk of death anywhere from 16% to 30%.

Another takeaway from the study, however, is that waist circumference is a bigger player in mortality risk than overall body weight, which has certainly been suggested by previous studies. Belly fat seems to be disproportionately linked to chronic health issues like heart disease, stroke, diabetes, cancer, and of course, early mortality. So reducing belly fat is always a significant benefit to one’s health.

“This large study is rather complex in its details, but the take-away messages are actually both clear and simple,” says David L, Katz, Director of the Yale University Prevention Research CenterGriffin Hospital. “At any given body weight, going from inactive to active can reduce the risk of premature mortality substantially. At any given level of activity, going from overweight to a more optimal weight can do the same. We have long known that not all forms of obesity are equally hazardous, and this study reaffirms that. Losing weight if you have an excess around the middle, where it is most dangerous, exerts an influence on mortality comparable to physical activity. Losing excess weight that is not associated with a high waist circumference reduces mortality risk, but less — as we would expect.”

But perhaps the main point in all of this is that being active and being a healthy weight are inextricably linked. Though activity by itself can offer an immediate health benefit if you remain overweight, getting active also leads naturally to loss of body weight. “This study reminds that being both fit and unfat are good for health,” says Katz, “and can add both life to years, and years to life. These are not really disparate challenges, since the physical activity that leads to fitness is on the short list of priorities for avoiding fatness as well. The challenge before us now is for our culture to make it easier to get there from here.”

Earlier this month a study showed that the concept of “healthy obesity” may be very misleading, since health markers in an obese person tend to deteriorate over time. Though the current study suggests that fitness may matter more than fatness, the two are really two sides of a coin: It would be silly to become active and not lose weight — and it would be very hard to do, since the one leads to the other. But perhaps given the great benefits of exercise alone, public health campaigns should focus not just on losing weight, but on encouraging people to add just small amounts physical activity to their lives right off the bat, and to see where it goes from there.