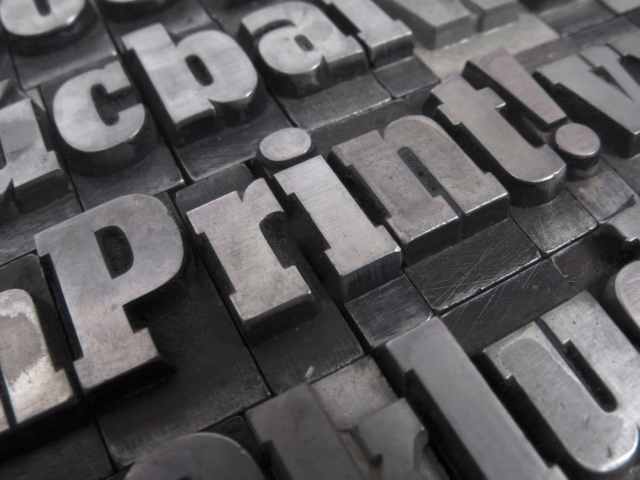 In the beginning, the rules of the space bar were simple. Two spaces after each period. Every time. Easy.

That made sense in the age of the typewriter. Letters of uniform width looked cramped without extra space after the period. Typists learned not to do it.

But then, at the end of the 20th century, the typewriter gave way to the word processor, and the computer, and modern variable-width fonts. And the world divided.

Some insisted on keeping the two-space rule. They couldn’t get used to seeing just one space after a period. It simply looked wrong.

Some said this was blasphemy. The designers of modern fonts had built the perfect amount of spacing, they said. Anything more than a single space between sentences was too much.

And so the rules of typography fell into chaos. “Typing two spaces after a period is totally, completely, utterly, and inarguably wrong,” Farhad Manjoo wrote in Slate in 2011. “You can have my double space when you pry it from my cold, dead hands,” Megan McArdle wrote in the Atlantic the same year. (And yes, she double-spaced it.)

This schism has actually existed throughout most of typed history, the writer and type enthusiast James Felici once observed (in a single-spaced essay).

The rules of spacing have been wildly inconsistent going back to the invention of the printing press. The original printing of the U.S. Declaration of Independence used extra long spaces between sentences. John Baskerville’s 1763 Bible used a single space. WhoevenknowswhateffectPietroBembowasgoingforhere.Single spaces. Double spaces. Em spaces. Trends went back and forth between continents and eras for hundreds of years, Felici wrote.It’s not a good look.

Ob viously, thereneed to be standards. Unless you’re doing avant – garde po e try, or something , you can’tjustspacew ords ho w e v e r y o u want. That would be insanity. Or at least, obnoxious.

Enter three psychology researchers from Skidmore College, who decided it’s time for modern science to sort this out once and for all.

“Professionals and amateurs in a variety of fields have passionately argued for either one or two spaces following this punctuation mark,” they wrote in a paper published last week in the journal Attention, Perception, & Psychophysics.

They cite dozens of theories and previous research, arguing for one space or two. A 2005 study that found two spaces reduced lateral interference in the eye and helped reading. A 2015 study that found the opposite. A 1998 experiment that suggested it didn’t matter.

“However,” they wrote, “to date, there has been no direct empirical evidence in support of these claims, nor in favor of the one-space convention.”

So the researchers, Rebecca L. Johnson, Becky Bui and Lindsay L. Schmitt, rounded up 60 students and some eye tracking equipment, and set out to heal the divide.

First, they put the students in front of computers and dictated a short paragraph, to see how many spaces they naturally used. Turns out, 21 of the 60 were “two-spacers,” and the rest typed with close-spaced sentences that would have horrified the Founding Fathers.

The researchers then clamped each student’s head into place, and used an Eyelink 1000 to record where they looked as they silently read 20 paragraphs. The paragraphs were written in various styles: one-spaced, two-spaced, and strange combinations like two spaces after commas, but only one after periods. And vice versa, too.

And the verdict was: two spaces after the period is better. It makes reading slightly easier.

Reading speed only improved marginally, the paper found, and only for the 21 “two-spacers,” who naturally typed with two spaces between sentences. The majority of one-spacers, on the other hand, read at pretty much the same speed either way. And reading comprehension was unaffected for everyone, regardless of how many spaces followed a period.

The major reason to use two spaces, the researchers wrote, was to make the reading process smoother, not faster. Everyone tended to spend fewer milliseconds staring at periods when a little extra blank space followed it.

(Putting two spaces after a comma, if you’re wondering, slowed down reading speed, so don’t do that.)

The study’s authors concluded that two-spacers in the digital age actually have science on their side, and more research should be done to “investigate why reading is facilitated when periods are followed by two spaces.”

But no sooner did the paper publish than the researchers discovered that science doesn’t necessarily govern matters of the space bar.

Johnson and her co-authors submitted the paper with two spaces after each period — as was proper. And the journal deleted all the    extra spaces anyway. 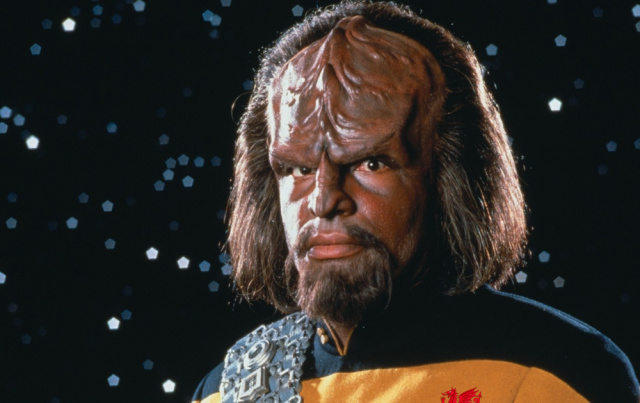 Klingon was the chosen language for the Welsh government in its response to queries about UFO sightings at Cardiff Airport.

While English and Welsh are the usual forms of communications in the Senedd, it opted for the native tongue of the enemies of Star Trek’s Captain Kirk.

Shadow Health Minister Darren Millar had asked for details of UFOs sightings and asked if research would be funded.

In full it said it translated as: “The minister will reply in due course. However this is a non-devolved matter.”

It is believed to be the first time the Welsh government has chosen to communicate in Klingon.

Mr Millar, shadow health minister and AM for Clwyd West, submitted three questions to economy, science and transport minister Edwina Hart about UFO reports around the airport and across the rest of Wales.

Responding to the government’s unusual diversion into trilingualism, Mr Millar said: “I’ve always suspected that Labour ministers came from another planet. This response confirms it.”

1) Will the minister make a statement on how many reports of unidentified flying objects there have been at Cardiff Airport since its acquisition by the Welsh government?

2) What discussions has the Welsh government had with the Ministry of Defence regarding sightings of unidentified flying objects in Wales in each of the past five years?

3) What consideration has the Welsh government given to the funding of research into sightings of unidentified flying objects in Wales?

The Oxford English Dictionary is a historical dictionary, which means that when its editors add a phrase such as hot mess to their reference—as they did this week—they add every definition of the word they can find. The editors are like detectives, following phrases back to times when Anglo-Saxons were jabbering about peasants and overlords.

The quarterly update reveals that in the 1800s, for instance, a “hot mess” was a warm meal, particularly one served to a group like troops. In the 1900s, people used hot mess to refer to a difficult or uncomfortable situation. And in the 2000s, one used it to refer to Amy Schumer (or, as they put it, something or someone in extreme confusion or disorder).

Twerk, another new addition, might have been made famous by Miley Cyrus and a foam finger in 2013, but the editors traced its meaning back to 1820, when twirk referred to a twisting or jerking movement. The precise origin of the word is uncertain, the editors say, but it may be a blend of twist or twitch and jerk. Their definition: “To dance to popular music in a sexually provocative manner, using thrusting movements of the bottom and hips while in a low, squatting stance.”

Here is a selection from the hundreds of words OED just added to its ranks, along with the earliest known usage and context provided by TIME.

autotune (v., 1997): to alter or correct the pitch of (a musical or vocal performance) using an auto-tune device, software, etc. The word has meant “to tune automatically” since 1958, when people were tuning radio transmitters rather than hilarious local news interviews.

backronym (n., 1983): a contrived explanation of an existing word’s origin, positing it as an acronym. When some guy tries to say that golf is an acronym of “gentlemen only, ladies forbidden,” that is a backronym (and clever nonsense). It more likely comes from the Dutch word kolf, which describes a stick used in sports.

boiler room (n., 1892): a place used as a center of operations for an election campaign, especially a room equipped for teams of volunteers to make telephone calls soliciting support for a party or candidate. This phrase has been used to describe an actual room that contains boilers, as on a steamship, since 1820.

bridge-and-tunnel (adj., 1977): of or designating a person from the outer boroughs or suburbs of a city, typically characterized as unsophisticated or unfashionable. The phrase was first used by Manhattanites to describe people they thought unworthy of their island.

cisgender (adj., 1999): designating someone whose sense of personal identity corresponds to the sex and gender assigned to him or her at birth. This word exists to serve as an equal and complement to transgender.

FLOTUS (n., 1983): the First Lady of the United States. This is a true acronym, which appears to have been first applied to Nancy Reagan.

half-ass (v., 1954): to perform (an action or task) poorly or incompetently; to do (something) in a desultory or half-hearted manner. One can also insult someone by calling them an “ass,” referring to the horse-like creature who has appeared in stories as the type who is clumsy or stupid since the time of the Greeks.

koozie (n., 1982): an insulating sleeve that fits over a beverage can or bottle to keep it cold. Fun fact: that little cardboard thing one slips around a cup of coffee to keep it from burning one’s hand is known as a zarf.

Masshole (n., 1989): term of contempt for a native or inhabitant of the state of Massachusetts. This is what is known as a blended word, which Lewis Carroll called portmanteaus, naming them after a suitcase that unfolds into two equal parts.

sext (n., 2001): a sexually explicit or suggestive message or image sent electronically, typically using a mobile phone. Back in the 1500s, when someone referred to a “sext,” they were talking about a Christian worship ritual that involved chanting around midday.

stanky (adj., 1972): having a strong (usually unpleasant) smell. The OED editors offer the comparison to skanky, which means unattractive or offensive, as well as janky, which refers to something that is untrustworthy or of poor quality.