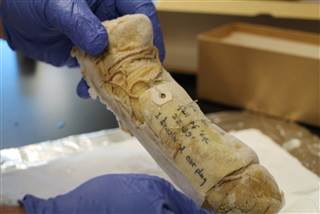 Using built-up earwax taken from a blue whale carcass, researchers have been able to reconstruct a picture of its life by the chemicals and hormones in its ears.

The whale in question was a male blue whale that died after it was struck by a ship near Santa Barbara, Calif., in 2007. Researchers removed a 10-inch ear plug from the carcass during a necropsy. They did a careful chemical analysis of it to measure what the whale had been exposed to in its lifetime. The study appeared in a recent edition of the journal Proceedings of the National Academies of Science.

The scientific community has been excited about the possibilities raised by the new method “once they get past the ‘eew!’ factor of it being earwax,” says Stephen Trumble, lead author on the paper and a biology professor at Baylor University in Waco, Texas.

Baleen whales are known to accumulate layers of earwax in their ear canal. These create a waxy plug that can be over a foot long. The earwax is laid down in layers, a dark one when the animal is feeding and a light one when the animal is migrating and eats very little. The layers are routinely used to determine whale ages.

Now by analyzing the chemicals, pollutants and other matter that accumulated in that wax, researchers were able to build a very complete picture of the animal’s life and exposure to chemicals.

The whale was likely born around 1995. It was exposed to large concentrations of persistent organic pollutants such as DDT and other pesticides in the first six months of its life, most likely while it was still nursing. Many mammals are known to pass chemicals through milk and researchers believe that’s what happened to this whale.

DDT is one of a group of persistent organic pollutants that can take decades to break down in the environment. Although it was banned in the United States in 1972 it is still found in the world’s oceans, and was present at higher levels when this whale was born.
There were also two spikes in its exposure to mercury, around ages 5 and 10. The researchers think these might have occurred as the animal migrated past the coast of California, possibly exposing it to higher levels of pollution than it encountered in the open ocean and when passing less polluted land masses.

When it was about 10 years of age researchers believe it became sexually mature because of increases in testosterone. Its stress hormones spike right around that time, too, which the researchers believe might have been linked to breeding competition or social bonds it formed during this period.

The method offers researchers a much easier and more precise way of measuring what whales are exposed to than previous methods, which included examining whale blubber, blood, feces and blowhole spray, says Sascha Usenko, a professor of environmental chemistry and one of the Baylor researchers.

Since their paper was published they’ve been getting offers of whale earwax specimens, called plugs,from around the world. “We’re going to receive one hopefully this week that’s about three and a half feet long from a bowhead whale from Barrow, Alaska,” Trumble said.