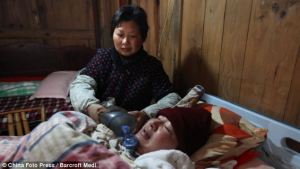 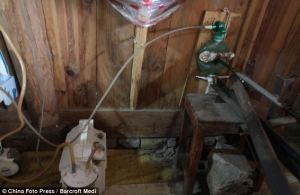 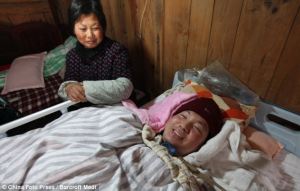 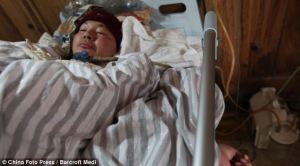 A Chinese man has been kept alive for the last five years thanks to a homemade ventilator that his family have to manually squeeze hundreds of times a day. Fu Xuepeng was 25 when he collided with a car while riding his motorbike to a supermarket. He was diagnosed with severe damage to his nervous system and has been paralysed from the neck down and unable to breathe unaided ever since. Instead, he must rely on a ventilator with a breathing tube in his airway.

But after four months on breathing equipment in Taizhou First People’s Hospital, his parents were forced to bring him home because of the unbearably high medical expenses. Despite receiving 300,000 yuan (£30,0000) in compensation from the driver, it cost more than 10,000 (£1,000) yuan per week to keep Fu on a medical ventilator, according to a report by the website china.org.cn. His mother Wang Lanqin and father Fu Minzu were left with only one option – to remove him from hospital and try to care for him at home. They bought a bag valve mask ventilator and have manually pumped lifesaving oxygen into his lungs by hand ever since. To keep Fu, now, 30, alive, the attached air ball must be squeezed at even intervals to manually pump oxygen into the body.

His parents, two sisters and brothers-in-law all take it in turns to squeeze the resuscitator bag 18 times per minute. Incredibly, if they stop for just three minutes Fu would die. As a result of such tireless work, their hands have now been deformed by constantly squeezing the device. Their only break is at night, when a home built DIY ventilator, crafted by Fu’s younger brother in 2009 after watching how to make one on TV, is used. This comprises an electric motor and a pushing pole attaching the device to the bag valve mask. However the high cost of electricity means they cannot use it all day, forcing them to continue their bed side vigils throughout the day.

But the family’s fortunes are now set to change after a blog documenting his heart-wrenching story was spotted by a Chinese company that makes ventilators.
It has now pledged to donate a ventilator to him and other well-wishers have set up a fund to raise money for him. Government staff and doctors from the local hospital are also set to visit the family now its plight has come to light.

Last week MailOnline told the story of Hu Songwen, a Chinese man who has been kept alive by his homemade dialysis machine for 13 years. Hu, who suffers from kidney disease, made it from kitchen utensils and old medical instruments after he could no long afford hospital fees. He was a college student when he was diagnosed in 1993 with kidney disease, which means waste products cannot be removed from his blood. He underwent dialysis treatment in hospital but ran out of savings after six years. His solution was to create his own machine to slash his costs.