It said that one of the Lockheed Martin F-16 made a first flight with an empty cockpit last week.

Two US Air Force pilots controlled the plane from the ground as it flew from a Florida base to the Gulf of Mexico.

Boeing suggested that the innovation could ultimately be used to help train pilots, providing an adversary they could practise firing on.

It carried out a series of manoeuvres including a barrel roll and a “split S” – a move in which the aircraft turns upside down before making a half loop so that it flies the right-way-up in the opposite direction. This can be used in combat to evade attack.

Boeing said the unmanned F16 was followed by two chase planes to ensure it stayed in sight, and also contained equipment that would have allowed it to self-destruct if necessary.

The firm added that the flight attained 7Gs of acceleration but was capable of carrying out manoeuvres at 9Gs – something that might cause physical problems for a pilot.

“It flew great, everything worked great, [it] made a beautiful landing – probably one of the best landings I’ve ever seen,” said Paul Cejas, the project’s chief engineer.

Lt Col Ryan Inman, Commander of the US Air Force’s 82nd Aerial Targets Squadron, also had praise for how the test had gone.

“It was a little different to see it without anyone in it, but it was a great flight all the way around,” he said.

Boeing said that it had a total of six modified F-16s, which have been renamed QF-16s, and that the US military now planned to use some of them in live fire tests.

However, a spokesman for the Campaign to Stop Killer Robots warned of the temptation to use them in warfare.

“I’m very concerned these could be used to target people on the ground,” said Prof Noel Sharkey.

“I’m particularly worried about the high speed at which they can travel because they might not be able to distinguish their targets very clearly.

“There is every reason to believe that these so-called ‘targets’ could become a test bed for drone warfare, moving us closer and closer to automated killing.”

This is not the first time a jet has been retrofitted to fly without a pilot inside. The US Air Force has previously used adapted F4- Phantoms for target practice. 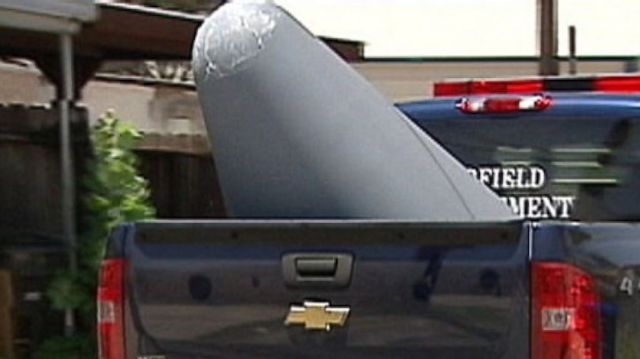 Boeing is investigating how a piece of a military aircraft fell off and crashed in a Texas backyard, authorities told ABC News.

Nate Martinez and his girlfriend Melissa Gutierrez were sitting in their San Antonio home Thursday morning when they heard a loud noise outside, they told ABC affiliate station KSAT.

“I looked outside,” said Martinez. “I kind of looked all the way around and I was surprised to see an aircraft part there. It was a little surprising.”

The grey, cone-shaped aircraft part “was obviously part of a military aircraft that had somehow fallen onto their back patio area,” a spokesperson for the San Antonio Police Department told ABC News.

Field identified the piece as an aft ray dome, a rear piece of a Boeing C-17 cargo plane, which is currently in service in the United States Air Force.

“I’m amazed that this happened. It is not common for the military to lose any part of an airplane like this.”

Field believes the aft ray dome fell while the aircraft was in-flight.

“I would bet you that the crew didn’t even know that it had come off because this part of the plane is all the way in the back. They would not have felt a thing,” he said.

According to San Antonio police nobody was hurt by the fallen aircraft part and there was no major property damage.

Still, Martinez and Gutierrez are concerned for their children’s safety.

“It’s very scary…It could have [hurt our children],” Gutierrez said. “That’s what we are worried about. We’re out here a lot barbecuing and it landed on our barbecue pit.”

A spokesperson for Joint Base San Antonio-Randolph, an Air Force Base near Martinez’s home, could not comment on the incident and directed ABC News to Peter Pedraza, a spokesman for the Boeing Company.

“Boeing is investigating the cause of an in-flight incident…Our highest priority is the safety and well being of those in the community and the passengers and crewmembers who fly aboard Boeing airplanes. We will continue to share information as the investigation progresses,” Pedraza said.