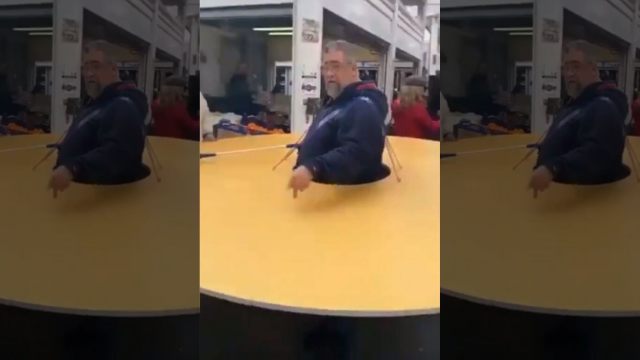 A man in Italy has been spotted wearing what has been described as a social-distancing “doughnut” in order to ensure he stays a safe distance from others during the country’s outbreak of COVID-19.

In the footage, which was shared online last week, the man is seen wearing a large yellow saucer, which has been suspended around his waist with two arm straps.

“And this would be a safe distance?” another man can be heard asking him in Italian, to which the doughnut-wearing citizen confirms.

“For coronavirus,” the man responds.

The video was reportedly captured in Rome’s Mercato Testaccio, a popular food market located in the Testaccio neighborhood south of the city’s center, according to a tag placed on the video.

Nowhere in the footage does the man refer to the apparatus as a “doughnut,” although that name had been applied by social media viewers, as well as Popular Mechanics.

Twitter users soon declared the man “un genio” (a genius) and praised him for his ingenuity, while another asked why the World Health Organization hadn’t thought of this idea first.

Despite the jokes, the practice of “social distancing” amid the ongoing coronavirus pandemic has been recommended by health agencies to stem the spread of COVID-19.

“Social distancing for COVID-19 means avoiding places or gatherings where you are likely to be exposed to respiratory droplets from others – directly or on surfaces,” Dr. Jill Grimes, an urgent care physician at The University of Texas, had previously told Fox News. “We know this virus is spread primarily by these droplets, up to a distance of roughly six feet (from a cough or a sneeze) and so avoiding areas where people are physically closer than six feet is key.”