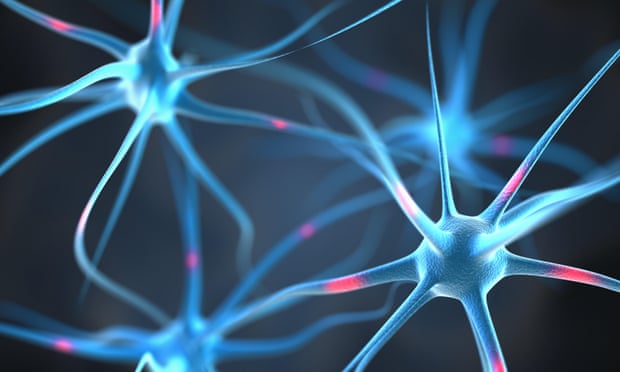 Neurons in the brain. Rather than implanting directly into the brain, the bionic neurons are built into ultra-low power microchips that form the basis for devices that would plug straight into the nervous system.

Scientists have created artificial neurons that could potentially be implanted into patients to overcome paralysis, restore failing brain circuits, and even connect their minds to machines.

The bionic neurons can receive electrical signals from healthy nerve cells, and process them in a natural way, before sending fresh signals on to other neurons, or to muscles and organs elsewhere in the body.

One of the first applications may be a treatment for a form of heart failure that develops when a particular neural circuit at the base of the brain deteriorates through age or disease and fails to send the right signals to make the heart pump properly.

Rather than implanting directly into the brain, the artificial neurons are built into ultra-low power microchips a few millimetres wide. The chips form the basis for devices that would plug straight into the nervous system, for example by intercepting signals that pass between the brain and leg muscles.

“Any area where you have some degenerative disease, such as Alzheimer’s, or where the neurons stop firing properly because of age, disease, or injury, then in theory you could replace the faulty biocircuit with a synthetic circuit,” said Alain Nogaret, a physicist who led the project at the University of Bath.

The breakthrough came when researchers found they could model live neurons in a computer program and then recreate their firing patterns in silicon chips with more than 94% accuracy. The program allows the scientists to mimic the full variety of neurons found in the nervous system.

Writing in the journal Nature Communications, the researchers describe how they fed the program with data recorded from two types of rat neuron, which were stimulated in a dish. The neurons were either from the hippocampus, a region that is crucial for memory and learning, or were involved in the subconscious control of breathing.

Armed with the program, the researchers claim they can now build bionic neurons based on any of the real nerve cells found in the brain, spinal cord, or the more distant reaches of the peripheral nervous system, such as the sensory neurons in the skin.

Because the artificial neurons both receive and send signals, they can be used to make implants that respond to neural feedback signals that are constantly coursing around the body.

“The potential is endless in terms of understanding how the brain works, because we now have the fundamental understanding and insight into the functional unit of the brain, and indeed applications, which might be to improve memory, to overcome paralysis and ameliorate disease,” said Julian Paton, a co-author on the study who holds posts at the Universities of Bristol and Auckland.

“They can be used in isolation or connected together to form neuronal networks to perform brain functions,” he added.

With development, trials and regulations to satisfy, it could be many years before the artificial neurons are helping patients. But if they prove safe and effective, they could ultimately be used to circumvent nerve damage in broken spines and help paralysed people regain movement, or to connect people’s brains to robotic limbs that can send touch sensations back through the implant to the brain.

Despite the vast possibilities the artificial neurons open up, Nogaret said the team was nowhere near building a whole brain, an organ which in a human consists of 86bn neurons and at least as many supporting cells. “We are not claiming that we are building a brain, there’s absolutely no way,” he said.

The scientists’ approach differs from that taken by many other peers who hope to recreate brain activity in computers. Rather than focusing on individual neurons, they typically model brain regions or even whole brains, but with far less precision. For example, the million-processor SpiNNaker machine at the University of Manchester can model an entire mouse brain, but not to the level of individual brain cells.

“If you wanted to model a whole mouse brain using the approach in this paper you might end up designing 100 million individual, but very precise, neurons on silicon, which is clearly unfeasible within a reasonable time and budget,” said Stephen Furber, professor of computer engineering at the University of Manchester.

“Because the approach is detailed and laboriously painstaking, it can really only be applied in practice to smallish neural units, such as the respiratory neurons described above, but there are quite a few critical small neural control circuits that are vital to keeping us alive,” he added.