An artificial intelligence has debated the dangers of AI – narrowly convincing audience members that the technology will do more good than harm.

Project Debater, a robot developed by IBM, spoke on both sides of the argument, with two human teammates for each side helping it out. Talking in a female American voice to a crowd at the University of Cambridge Union on Thursday evening, the AI gave each side’s opening statements, using arguments drawn from more than 1100 human submissions made ahead of time.

On the proposition side, arguing that AI will bring more harm than good, Project Debater’s opening remarks were darkly ironic. “AI can cause a lot of harm,” it said. “AI will not be able to make a decision that is the morally correct one, because morality is unique to humans.”

“AI companies still have too little expertise on how to properly assess datasets and filter out bias,” it added. “AI will take human bias and will fixate it for generations.”

The AI used an application known as “speech by crowd” to generate its arguments, analysing submissions people had sent in online. Project Debater then sorted these into key themes, as well as identifying redundancy – submissions making the same point using different words. 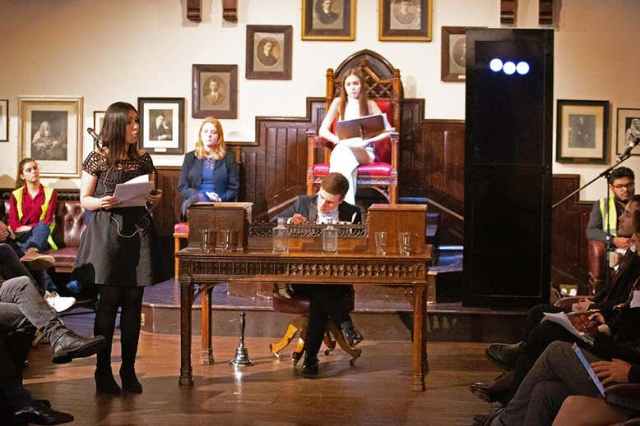 The AI argued coherently but had a few slip-ups. Sometimes it repeated itself – while talking about the ability of AI to perform mundane and repetitive tasks, for example – and it didn’t provide detailed examples to support its claims.

While debating on the opposition side, which was advocating for the overall benefits of AI, Project Debater argued that AI would create new jobs in certain sectors and “bring a lot more efficiency to the workplace”.

But then it made a point that was counter to its argument: “AI capabilities caring for patients or robots teaching schoolchildren – there is no longer a demand for humans in those fields either.”

The pro-AI side narrowly won, gaining 51.22 per cent of the audience vote.

Project Debater argued with humans for the first time last year, and in February this year lost in a one-on-one against champion debater Harish Natarajan, who also spoke at Cambridge as the third speaker for the team arguing in favour of AI.

IBM has plans to use the speech-by-crowd AI as a tool for collecting feedback from large numbers of people. For instance, it could be used by governments seeking public opinions about policies or by companies wanting input from employees, said IBM engineer Noam Slonim.

“This technology can help to establish an interesting and effective communication channel between the decision maker and the people that are going to be impacted by the decision,” he said.