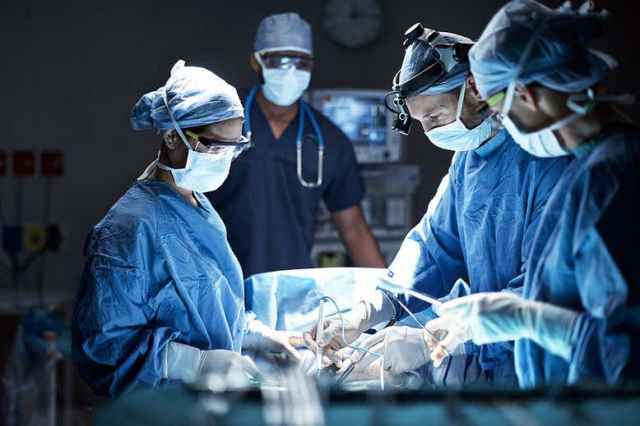 Doctors have placed humans in suspended animation for the first time, as part of a trial in the US that aims to make it possible to fix traumatic injuries that would otherwise cause death.

Samuel Tisherman, at the University of Maryland School of Medicine, told New Scientist that his team of medics had placed at least one patient in suspended animation, calling it “a little surreal” when they first did it. He wouldn’t reveal how many people had survived as a result.

The technique, officially called emergency preservation and resuscitation (EPR), is being carried out on people who arrive at the University of Maryland Medical Centre in Baltimore with an acute trauma – such as a gunshot or stab wound – and have had a cardiac arrest. Their heart will have stopped beating and they will have lost more than half their blood. There are only minutes to operate, with a less than 5 per cent chance that they would normally survive.

EPR involves rapidly cooling a person to around 10 to 15°C by replacing all of their blood with ice-cold saline. The patient’s brain activity almost completely stops. They are then disconnected from the cooling system and their body – which would otherwise be classified as dead – is moved to the operating theatre.

A surgical team then has 2 hours to fix the person’s injuries before they are warmed up and their heart restarted. Tisherman says he hopes to be able to announce the full results of the trial by the end of 2020.

At normal body temperature – about 37°C – our cells need a constant supply of oxygen to produce energy. When our heart stops beating, blood no longer carries oxygen to cells. Without oxygen, our brain can only survive for about 5 minutes before irreversible damage occurs. However, lowering the temperature of the body and brain slows or stops all the chemical reactions in our cells, which need less oxygen as a consequence.

Tisherman’s plan for the trial was that 10 people who receive EPR will be compared with 10 people who would have been eligible for the treatment but for the fact that the correct team wasn’t in the hospital at the time of admittance.

The trial was given the go-ahead by the US Food and Drug Administration. The FDA made it exempt from needing patient consent as the participants’ injuries are likely to be fatal and there is no alternative treatment. The team had discussions with the local community and placed ads in newspapers describing the trial, pointing people to a website where they can opt out.

Tisherman’s interest in trauma research was ignited by an early incident in his career in which a young man was stabbed in the heart after an altercation over bowling shoes. “He was a healthy young man just minutes before, then suddenly he was dead. We could have saved him if we’d had enough time,” he says. This led him to start investigating ways in which cooling might allow surgeons more time to do their job.

Animal studies showed that pigs with acute trauma could be cooled for 3 hours, stitched up and resuscitated. “We felt it was time to take it to our patients,” says Tisherman. “Now we are doing it and we are learning a lot as we move forward with the trial. Once we can prove it works here, we can expand the utility of this technique to help patients survive that otherwise would not.”

“I want to make clear that we’re not trying to send people off to Saturn,” he says. “We’re trying to buy ourselves more time to save lives.”

In fact, how long you can extend the time in which someone is in suspended animation isn’t clear. When a person’s cells are warmed up, they can experience reperfusion injuries, in which a series of chemical reactions damage the cell – and the longer they are without oxygen, the more damage occurs.

It may be possible to give people a cocktail of drugs to help minimise these injuries and extend the time in which they are suspended, says Tisherman, “but we haven’t identified all the causes of reperfusion injuries yet”.

Tisherman described the team’s progress on Monday at a symposium at the New York Academy of Sciences. Ariane Lewis, director of the division of neuro-critical care at NYU Langone Health, said she thought it was important work, but that it was just first steps. “We have to see whether it works and then we can start to think about how and where we can use it.”