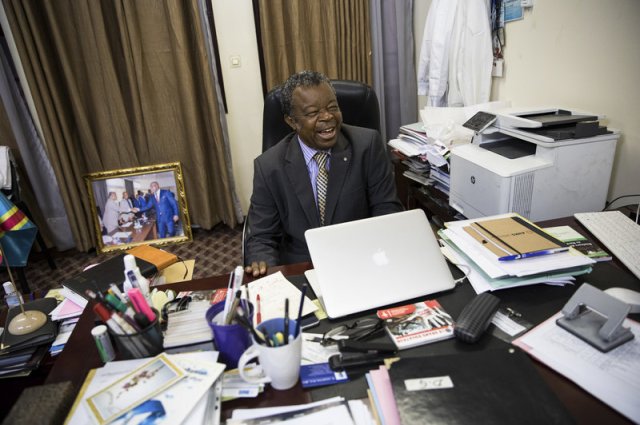 Dr. Jean-Jacques Muyembe first encountered Ebola in 1976, before it had been identified. Since then, from his post at the Congo National Institute for Biomedical Research, he has led the global search for a cure.

Dr. Jean-Jacques Muyembe says his story starts in 1973. He had just gotten his Ph.D. at the Rega Institute in Belgium. He could have stayed in Europe, but he decided to return to Congo, or what was then known as Zaire, which had only recently attained independence from Belgium.

If he had stayed in Belgium, he says, he would have been doing routine lab work. But in Congo, he would be responsible for the “health of my people.”

“But when I arrived here the conditions of work were not good,” he says. “I had no lab; I had no mice for the experimentation, so it was very difficult to work here.”

Being a microbiologist without mice or a lab was useless, so he took a job as a field epidemiologist. In 1976, he was called to an outbreak of a mysterious disease in central Congo.

Lots of people had died of something that presented like yellow fever, typhoid or malaria. Muyembe arrived to a nearly empty hospital. He says people thought the infection was coming from the hospital, and he found only a mother and her baby.

“I thought that it was malaria or something like this,” he says. “But in the night the baby died, so the hospital was completely empty.”

By morning, as the people of Yambuku heard Muyembe had been sent by the central government in Kinshasa, they started lining up at the hospital hoping he had medicine for them.

“I started to make physical exam,” he says. “But at that time we had no gloves in the whole hospital.”

And, of course, he had to draw blood, but when he removed the syringes, the puncture would gush blood.

“It was the first time for me to see this phenomenon,” he says. “And also my fingers were soiled with blood.”

Muyembe says he washed his hands, but it was really luck that kept him from contracting an infection. He knew immediately this was something he’d never seen before. Some of the Belgian nuns in the village had been vaccinated against yellow fever and typhoid, but this disease was different. It was killing people fast. When he took liver samples with a long needle, the same thing would happen — blood would continue to gush.

He persuaded one of the nuns who had the disease to fly with him to Kinshasa. He took blood samples before she died and sent them to Belgium, where they had an electron microscope to try to identify the culprit. Scientists there and in the United States saw this was a new virus that caused hemorrhagic fever.

They named it Ebola, after a river near the village.

The discovery, says Muyembe, was thanks to a “consortium of research.”

But Google “Who discovered Ebola?” and you get a bunch of names — all of them white Western males. Dr. Jean Jacques Muyembe has been written out of history.

“Yes, but it is …” he pauses. He takes a breath and laughs, looking for the right way to respond.

The man who gets the bulk of the credit for discovering Ebola is Dr. Peter Piot. At the time, he was a young microbiologist at the Institute for Tropical Medicine in Belgium. He was the one to receive the blood samples sent by Muyembe.

He describes his experience in No Time to Lose, a book about his professional life, including his vast work on HIV.

But Ebola was his big break. In the book, he describes how vials of blood had arrived in melting ice, some of them broken.

He describes how the World Health Organization ordered them to give up the samples, to send them to England and eventually the Centers for Disease Control and Prevention in the United States, which was one of the only labs equipped to handle a deadly virus like Ebola.

He describes how angry that made him and Dr. Stefaan Pattyn, the man running the lab at the time, who died in 2008.

“[Pattyn] claimed that we needed a few more days to ready it for transport,” Piot wrote. “So we kept a few tubes of VERO cells, as well as some of the newborn mice, which were dying. Perhaps it was a stubborn rebellion against the whole Belgian history of constantly being forced to grovel to a greater power. That material was just too valuable, too glorious to let it go.”

Almost simultaneously, scientists at the CDC and Piot looked at the samples under an electron microscope and saw a snakelike filament — huge in comparison to other viruses and very similar to the Marburg virus. The CDC, which kept the world’s reference lab for hemorrhagic viruses, confirmed this was something new. This was Ebola.

The Congo National Institute for Biomedical Research sits in the middle of Kinshasa.

There are ragged couches along the corridors and goats feeding in the courtyard. But this is where the bulk of the science is being done on the second largest Ebola outbreak in history.

Tucked in corners around the building, there are high-tech labs. Scientists in full biohazard suits run Ebola samples through sophisticated machines that spit out DNA sequences. On the bulletin boards outside the offices, scientists have pinned papers published in international journals about the science done right here.

Workers are constantly dragging in boxes of brand-new scientific gear. On this day, almost all of them are stamped with the American flag.

It’s no secret there is resentment among scientists here about what many believe is a marginalization of their work by the West.

Joel Lamika, who runs an Ebola smartphone app at the institute, says many foreign governments want to stamp their flags on the work Congolese have done.

Lamika says perhaps one good thing that has come out of this latest Ebola outbreak is that it is giving the world a chance to rewrite history.

Muyembe, he says, is a national hero. His picture is on a huge banner in front of this institute. During previous Ebola outbreaks, and especially the huge one in West Africa that killed more than 11,000 people, the the scientific community used Muyembe as an example of someone who had gotten it right. Under his leadership, Congo had managed to quickly quell nine previous outbreaks.

Maybe this outbreak, he says, will give the world an opportunity to know who Muyembe is.

“It’s time for the world to learn that Ebola was discovered by a Congolese,” he said. “By Dr. Jean-Jacques Muyembe.”

Today, Peter Piot is the director of the prestigious London School of Hygiene and Tropical Medicine. He’s friends with Muyembe and expresses nothing but admiration for not only his scientific prowess, but the way he has managed public health emergencies.

But in his book, he mentions Muyembe only in passing, as a bright scientist constantly pressuring Piot for more resources.

When asked if he feels responsible for writing Muyembe out of history, Piot pauses.

“I think that’s a fair comment,” he says. “But my book was not an attempt to write the history of Ebola, but more my personal experience.”

Piot says at the time of that first Ebola outbreak, African scientists were simply excluded. White scientists — with a colonial mentality — parachuted in, took samples, wrote papers that were published in the West and took all of the credit.

But things are changing, he says. Muyembe, for example, is finally starting to get his due. He was recently given a patent for pioneering the first treatment for Ebola and he has received several international awards, including the Royal Society Africa Prize and, just this year, the Hideyo Noguchi Africa Prize.

“That reflects, I think, the [change in] power relations in global health and science in general,” he said.

During this outbreak, Muyembe has also made a decision many thought unthinkable even a few years ago. He decided that all of the blood samples collected during this Ebola epidemic will stay in Congo. Anyone who wants to study this outbreak will have to come to his institute.

American scientists, who have led the way in studying Ebola, have privately expressed frustrations. But Piot says the decision was obviously made because of how African scientists have been treated. Western scientists, he says, should get over it.

“We have to wake up to two things,” he says. “One, the world has changed. And two, it’s a matter of fairness.”

Muyembe keeps his office ice cold, and when he talks, he nervously drums a pen against his notebook. He’s terribly serious about his work, but he also offers an easy smile as he remembers his work.

The thing that makes him glow is talking about the treatment he developed.

“It is the most important achievement of my life,” he says.

In 1995, during another outbreak, he wondered whether antibodies developed by Ebola survivors could be siphoned from their blood and used to treat new cases. So he injected Ebola patients with the blood of survivors, taking inspiration from a practice used before sophisticated advances in vaccine-making.

“We did eight patients and seven survived,” he says.

The medical establishment wrote him off. He didn’t have a control group, they told him. But Muyembe knew that in this village, Ebola was killing 81% of people. Just this year, however, that science became the foundation of what is now proven to be the first effective treatment against Ebola, saving about 70% of patients.

“But if this idea was accepted by scientists, we [could have] saved a lot of people, a lot of lives,” he says.

You can tell Muyembe is hurt by all this. Ever since he returned to Congo, he has fought for recognition for his country. His whole life, he has dreamed that big science could come out of his home country.

Just as he announced that samples would not leave Congo, he also got a commitment from Japan to build a state-of-the-art research facility right here. Soon, the goats in the courtyard will be gone, replaced by a facility just as good as those in Belgium or in the United States.

At 77, Muyembe says he doesn’t regret coming back to Congo. And, unlike when he returned in 1973, now he has equipment.

“Now I have mice here,” he says, laughing. “I have mice. I have subculture. Now, everything is here.”

His biggest legacy, he says, won’t be that he helped to discover Ebola or a cure for it. It’ll be that if another young Congolese scientist finds himself with an interesting blood sample, he’ll be able to investigate it right here in Congo.