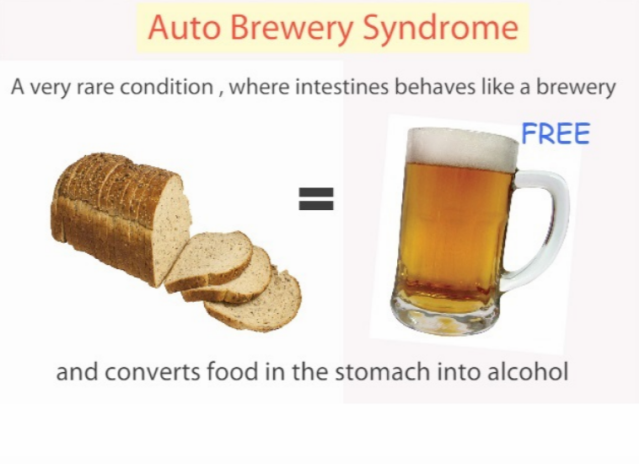 Microbes can produce so much alcohol that people become drunk—and sustain liver damage—without touching any booze.

The man’s troubles began in 2004, when, having moved from China to attend college in Australia, he got really drunk. That would hardly have been a noteworthy event, except that the man hadn’t consumed any alcohol—only fruit juice.

The bizarre incident soon turned into a pattern. About once a month, and out of the blue, he’d become severely inebriated without drinking any alcohol. Over time, the episodes became more severe and more frequent. He lost jobs because people suspected him of being a closet drinker. He was frequently hospitalized. In 2011, he returned to China and his mother cared for him while monitoring him with a Breathalyzer. His blood-alcohol levels, she found, would erratically and inexplicably soar to 10 times the legal limit for driving.

In June 2014, at the age of 27, he was admitted to the intensive-care unit of Chinese PLA General Hospital, in Beijing. At one point, so much alcohol was on his breath that he couldn’t sleep through the night. Another time, he threw up and blacked out after chugging some soda water. A CT scan showed that his liver was damaged, inflamed, and riddled with fatty deposits.

The man was diagnosed with a rare condition aptly known as auto-brewery syndrome, in which microbes in a person’s gut ferment carbohydrates into excessive amounts of alcohol. The earliest cases were documented in Japan in the 1950s, and a few dozen more have been reported since, in people all over the world, and even in children as young as 3. The microbial culprits are usually yeasts—the same fungi used to brew beer and wine—and the condition can often be treated with antifungal drugs.

But those drugs didn’t work on the Chinese patient. Baffled, a team of doctors, led by Jing Yuan from the Capital Institute of Pediatrics, analyzed the man’s stool samples and found that the alcohol in his body was being produced not by yeast, but by bacteria. During his first episode in the hospital, Klebsiella bacteria had bloomed so vigorously that it made up 19 percent of the microbes in his gut, and became 900 times more common than in healthy people.

Klebsiella pneumoniae is extremely common in both soils and human bodies. Though usually harmless, it’s also an opportunistic pathogen that can cause severe infections if given the chance. And while Klebsiella is not known for intoxicating its hosts, Yuan’s team found that the patient had two particular strains that can churn out alcohol. Many gut microbes do this, but at such low levels that their boozy by-products are easily removed by the liver. The Klebsiella strains in Yuan’s patient were exceptions: At one point, they produced so much of the stuff that it was as if the man had knocked back 15 shots of whiskey. “We were surprised that bacteria can produce so much alcohol,” Yuan says.

Auto-brewery syndrome is extreme, but it has similarities to other, milder and more prevalent conditions. For example, people with nonalcoholic fatty liver disease (NAFLD) build up fatty deposits in their liver in the style of heavy drinkers, despite touching little or no alcohol. This condition is very common, affecting 30 to 40 percent of American adults; the causes are still unclear and likely varied. Yuan wondered if Klebsiella might be involved, and when she analyzed 43 Chinese people with NAFLD, she found that 61 percent had the same high-alcohol strains as the man with auto-brewery syndrome. By contrast, just 6 percent of people with a healthy liver carry those strains.

To see if those strains were actually causing fatty livers, the team fed them to mice that had been raised in sterile conditions and lacked microbes of their own. Within two months, the rodents had signs of liver disease, inflammation, and scarring, comparable to mice that had been drinking alcohol itself. The same thing happened if the team transplanted the stool from an NAFLD patient into germ-free mice, but not if they first removed the alcohol-making Klebsiella using a virus—a phage—that specifically kills those strains. Although studies in mice should be treated with caution, Yuan nonetheless suggests that these strains could be an important cause of NAFLD, through the alcohol they produce.

Other researchers have suggested this before. In 2000, Anna Mae Diehl from Johns Hopkins University noticed that obese mice often have alcohol on their breath, which goes away after antibiotic treatment. “Intestinal production of ethanol may contribute to the genesis of obesity-related fatty liver,” she speculated. Two groups later showed that alcohol-producing microbes are more common in the guts of people with NAFLD than in those of their healthy peers.

While Yuan’s team pointed their fingers at Klebsiella, “it was found in only 60 percent of the human subjects they studied with NAFLD,” says Susan Baker at the State University of New York at Buffalo. “Others have identified other likely bacteria as possible culprits.” She cautions against focusing on any specific microbe, and instead considering the entire ecosystem of the body—bacteria, yeasts, viruses, gut cells, immune cells, liver, and all.

Yuan agrees. She notes that NAFLD is a complex and varied condition, and that even if Klebsiella does turn out to be a cause, it would be one of many. It also raises several questions: Why do some strains produce so much alcohol? Where do they come from? What makes them bloom so vigorously in people such as the unfortunate Chinese man who launched this study—genetics, diet, or something else? And perhaps most important, what can be done about them?

Phages might eventually help, as they did in Yuan’s mice. But for her patient with auto-brewery syndrome, simpler measures did the trick. He was treated with an antibiotic and put on a no-sugar, no-carbohydrate diet for three weeks. His intoxication symptoms eventually subsided, and two months later he was released from the hospital.