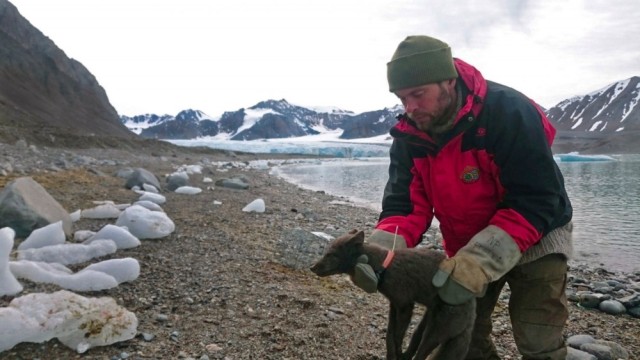 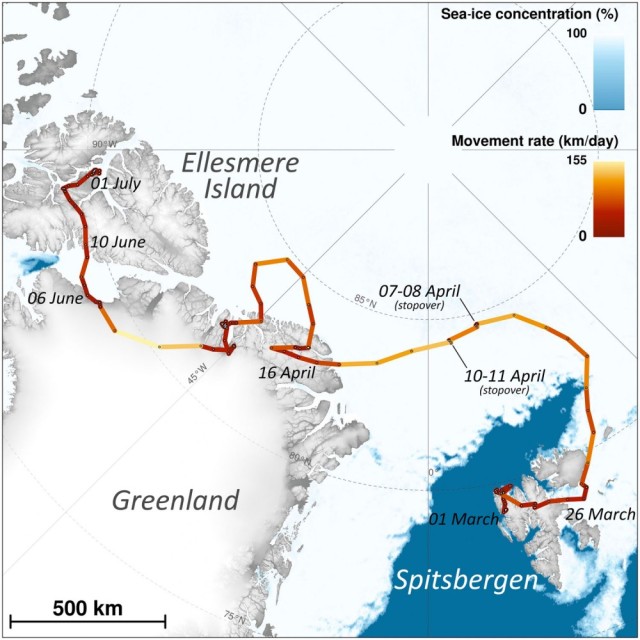 «We first did not believe it was true,» researchers Eva Fuglei says about the amazing run of the adventurous Arctic fox.

The animal that was carrying a satellite-tracked necklace set out from the Spitsbergen island on 26th March 2018. After 21 days, it arrived in Greenland. But it did not stop there. The fox subsequently continued its Arctic odyssey all the way to Ellesmere Island in Canada.

The distance of 3,506 km was completed in only 76 days, the Norwegian Polar Research Institute says. The average daily distance of the fox was 46 km. At most, the animal ran as much as 155 km per day.

«This is the quickest speed ever registered with an Arctic fox,» Fuglei says in a comment.

It used the Arctic ice as a trans-continental bridge, the researcher says.

It is the first ever study that in detail shows how an Arctic fox wanders between continents and different Arctic ecosystems, and the first ever documented migration from Svalbard to Canada.

The animal had an impressive speed, the researchers underline. It first crossed the polar ice between Svalbard and Greenland and then passed great glaciers before it again made it across the ice to Ellesmere Island.

The destiny of the small fox in Canada will be unknown to the researchers as the satellite transmitter stopped working in February this year. «But it will definitely have to change its food habits,» says Eva Fuglei. The Arctic fox population in Ellesmere Island eats mostly lemmings, while the Svalbard foxes find food in marine environments.

It is well known to researchers that Arctic foxes migrate across the Arctic, but Eva Fuglei and the Polar Reseach Institute are baffled by the long and quick run of the little super-fox.

Previously, Arctic fox populations migrated also between Iceland, Jan Mayen and other parts of the Arctic. But these populations are now isolated as the polar ice has vanished.

The ice has always provided animals with a platform for food and migration. However, with the warmer global climate and the melting Arctic ice life conditions for animals are under change.