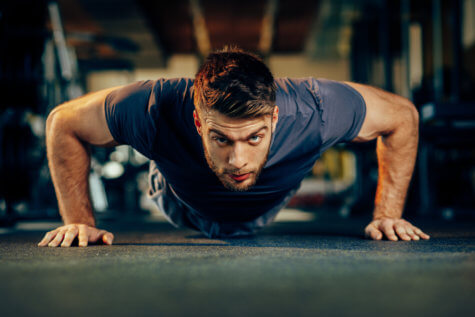 Here’s one way to predict your heart health: get down and give me 41. A new study finds that men who can perform at least 40 push-ups in one attempt are much less likely to suffer from heart disease within the next 10 years.

Researchers from the Harvard T.H. Chan School of Public health say their report is the first to show how push-up capacity is linked to heart disease. They found that middle-aged men who can log more than 40 push-ups in a single try have a 96% reduced risk of developing the potentially deadly condition and other related ailments, such as heart failure, compared to those who can complete no more than 10 push-ups.

For their study, the authors reviewed health data from 1,104 active male firefighters taken annually from 2000 to 2010. At the start of the study, the average participant was about 40 years old with an average body mass index of 28.7. The firefighters were tasked with performing as many push-ups as they could, and their treadmill tolerance was also tested.

By the end of the study period, 37 participants suffered from a heart disease-related condition — and 36 of those men weren’t able to log more than 40 push-ups in the initial test. The results of the treadmill test were not as clearly linked to heart disease diagnoses.

“Our findings provide evidence that push-up capacity could be an easy, no-cost method to help assess cardiovascular disease risk in almost any setting,” says the study’s first author, Justin Yang, an occupational medicine resident at the school. Surprisingly, push-up capacity was more strongly associated with cardiovascular disease risk than the results of submaximal treadmill tests.”

The authors note that because the study was completed by middle-aged men with active occupations, the results shouldn’t be considered the same for women or men who are less active or of different ages.

This study was published in JAMA Network Open.