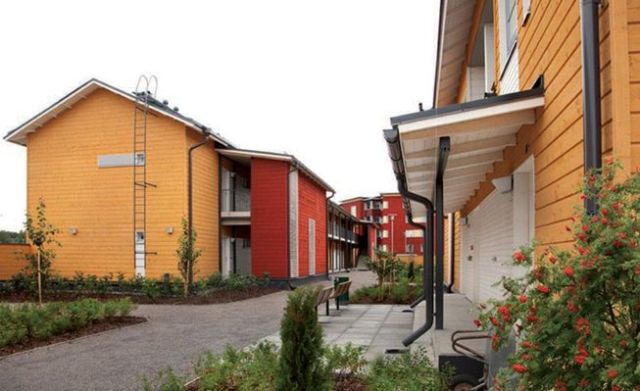 Europe is struggling with homelessness. According to the 2018 report from the European Federation of National Organizations Working with the Homeless (FEANTSA), the EU is facing a homelessness crisis.

“This past year has resolutely confirmed the existence of another Europe: a Europe not merely ignored but also misunderstood, not just despised but also forgotten — a Europe of the homeless. The homeless population has increased steadily in almost all EU countries.”

One of the exceptions is Finland. The country’s dedication to helping the homeless on a national scale has resulted in the homeless population dropping from a high of 18,000 in 30 years ago to 7,000 today, with 5,000 of those in some sort of temporary lodging situation with friends or relatives.

The Nordic country has managed to do this by putting housing first. In fact, that’s the name of Finland’s program on homelessness — a policy approach it borrowed from the United States.

Housing First in the U.S.

The Housing First approach “prioritizes providing permanent housing to people experiencing homelessness, thus ending their homelessness and serving as a platform from which they can pursue personal goals and improve their quality of life,” according to the National Alliance to End Homelessness fact sheet. This approach inverts the staircase model in which a homeless person complete certain steps, like obtaining a job or going through a drug rehabilitation program, before they’re provided with housing or housing assistance.

The staircase model positions housing as the goal while Housing First treats it as the starting line. From there, the sponsoring organization or government in charge of the housing will then supply various health and social services along with case management to the residents.

Housing First has been used in the U.S. in some form since the 1980s, but it has never been implemented on a national scale — and there lies the difference.

There has been some criticism of the Housing First approach in the U.S., most notably that Housing First tends to be used in a cookie cutter fashion instead of being customized to each area’s homeless. Another criticism is that Housing First policies don’t do enough to provide the necessary support after people have entered a residence, that there isn’t enough follow-through for a Housing Second or Housing Third step.

And that’s where Finland is taking the policy name and making it its own.

Ending homelessness, not managing it

Finland has worked to reduce homelessness in earnest since 1987, reports the Christian Science Monitor. The Finnish national government, along various cities, directed resources to help the homeless. While those efforts resulted in a decline in homelessness overall, long-term homelessness was not affected. In 2008, the Finnish government launched PAAVO I, a three-year plan developed using Housing First as its organizing principle with the goal of eliminating homelessness by 2015. Along with the national government, nine cities and various non-governmental organizations (NGOs) committed to the program.

“Basically, we decided that we wanted to end homelessness, rather than manage it,” Juha Kaakinen, CEO of the Y-Foundation, an NGO that helps to provide 16,500 low-cost apartments for the homeless, told the Christian Science Monitor. (You can listen to Kaakinen talk about the group’s philosophy and the impact of that approach in the great TEDx video below. One tidbit that sums it up: The name “Y” comes from the Finnish word “yksinainen,” which means “lonely” or “single.”)

Constructing that housing was the first step in implementing the Finnish plans. PAAVO I involved the construction of 1,250 new dwellings. By the end of the PAAVO I period in 2011, 1,519 units were up and running. In addition to the housing, the units needed to supply 24/7 on-site care for residents who required it.

One example, reported by the Christian Science Monitor, is Rukkila, a housing unit just outside of Helsinki that’s home to 20 people. Each resident has a modern apartment, and there’s a communal cooking and recreational area. Apart from rules governing overnight guests — residents need permissions first — residents are allowed to do whatever they want. Substance abuse rehabilitation is encouraged but not mandatory.

One resident is Fernando. He’s lived at Rukkila for three years now.

“I am dealing with my problems here,” he told the Christian Science Monitor. “In the meantime, it’s nice to know that whatever happens I have a roof over my head no matter what.”

This sort of mentality is what the Housing First approach in Finland encourages: wraparound services that aid the residents. Another housing unit, Väinölä, operated by the Salvation Army with support from the Y-Foundation, has over 10 people on staff to help residents with therapy or professional development. Residents are encouraged to help maintain the building through cleaning and gardening, and the building hosts open houses so members of the community can understand the goals of Väinölä and so the residents can be better integrated with the surrounding community.

“For a long time we dealt with homelessness in the traditional way,” Sanna Vesikansa, the deputy mayor of Helsinki told the Christian Science Monitor. “But it’s difficult for people to work on their problems if always in the morning they have to go out in the streets and then come back at night.”

The cost and the will

The 3,500 units constructed between 2008 and 2015 under PAAVO I and PAAVO II initiatives came in at just under $328 million, but supporters say the program has paid for itself.

Vesikansa cited a 2011 study that showed Finland saved $18,500 per homeless person who received a supported rental unit thanks to a reduction in the emergency and medical services no longer needed to assist them. She maintains the savings are probably higher now than they were in 2018.

“That doesn’t cover the contribution to the economy [from] residents who moved on from supported housing and got jobs,” she added.

For Kaakinen, whether or not the policies pay for themselves was of secondary concern.

“Of course the fact that the program pays for itself is important,” Kaakinen told the Christian Science Monitor, “but beyond that, from a moral point of view, as a society which cares for all of its citizens, we didn’t think we see an alternative. This, we felt, was the way to go forward. And we did.”

The Finnish government made a concentrated and dedicated effort to end homelessness in the country. As a FEANTSA study about Housing First policies reported, “In Finland, Housing First principles were implemented widely due to a strong political will to put an end to homelessness. All levels of government, regardless of political affiliation, have actively supported this process.”

Finland’s success is spurring on other countries, particularly the U.K., to adopt Housing First approaches modeled by the Nordic nation. The U.K. government will launch pilot projects in Greater Manchester, Merseyside and West Midlands beginning in 2019, reports the BBC. The plan is to provide 1,000 homes.

“If other countries are inspired by our example, that’s all for the better,” Kaakinen said. “There is no quick fix to all situations however, we found. A solid base can provide the foundation upon which to improve the lot of the homeless, and ultimately resolve this issue.