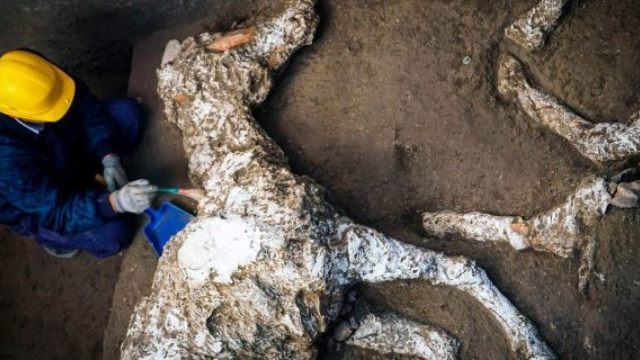 The horse, a purebred, was wearing a bronze-plated military saddle and ready to go when Mount Vesuvius erupted and buried the ancient city of Pompeii in A.D. 79. The horse, too, was covered in pumice and ash.

Almost 2,000 years later, archaeologists unearthed the immobilized horse, along with the remains of two others, in the remnants of a stable attached to a sumptuous suburban villa in Civita Giuliana, outside the walls of what remains of Pompeii, the Archaeological Park of Pompeii said in a statement on Monday.

The horses are among a growing list of archaeological treasures dug up at the Pompeii site, discovered in the late 16th century. This year, Pompeian excavations have found a shrine with wall paintings that hint at Roman life in the first century; the skeleton of a man who had fled the volcanic eruption only to be buried by a rock; and a well-preserved fresco in a house on the Via del Vesuvio depicting the mythological rape of Leda, the queen of Sparta, by Zeus in the form of a swan.

The horses probably perished soon after the volcanic explosion, with their frozen postures suggesting they had been unable to wrest free. The saddled horse and its elaborate harness were discovered over the summer, the archaeological park statement said.

Instead of stirrups, the saddle had four bronze-plated wooden horns, one in each corner, to help keep the rider stable. Researchers compared the saddle to those used by Romans around the time Mount Vesuvius erupted.

In May, researchers completed a plaster cast of the first horse found at the site. The dimensions suggested that the horses, including the latest discovered, had been of a valuable breed, officials said in a statement, a type used to display social status.

The discovery of the horses confirmed that the stable had been part of a prestigious estate, Massimo Osanna, the Pompeii site’s general director, said in the statement. The villa was enhanced with “richly frescoed and furnished rooms, and sumptuous sloping terraces facing onto the Gulf of Naples and Capri, as well as an efficient servant’s quarter, with a farmyard, oil and wine warehouses and densely cultivated lands,” according to the statement.

Archaeologists discovered 15 rooms from the villa in the early 20th century, and smaller finds since then. In 1955, dividing walls were found in excavations at Civita Giuliana. In recent decades, scavengers visited the site too, digging illegal tunnels below the estate.

To stop the illegal tunneling, official excavations began again this year. In 2019, with the aid of 2 million euros ($2.27 million), archaeologists will continue the work with an eye toward opening the site to the public, Mr. Osanna said.