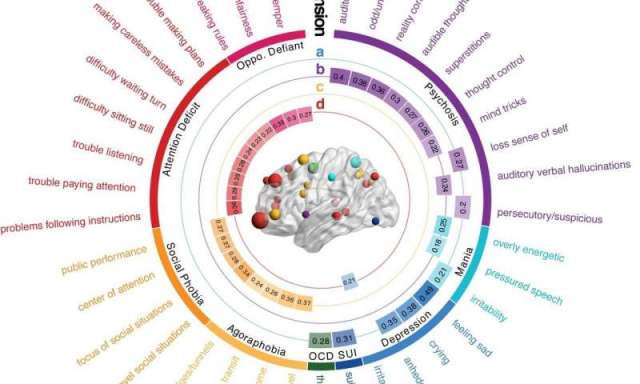 A new study using machine learning has identified brain-based dimensions of mental health disorders, an advance towards much-needed biomarkers to more accurately diagnose and treat patients. A team at Penn Medicine led by Theodore D. Satterthwaite, MD, an assistant professor in the department of Psychiatry, mapped abnormalities in brain networks to four dimensions of psychopathology: mood, psychosis, fear, and disruptive externalizing behavior. The research is published in Nature Communications this week.

Currently, psychiatry relies on patient reporting and physician observations alone for clinical decision making, while other branches of medicine have incorporated biomarkers to aid in diagnosis, determination of prognosis, and selection of treatment for patients. While previous studies using standard clinical diagnostic categories have found evidence for brain abnormalities, the high level of diversity within disorders and comorbidity between disorders has limited how this kind of research may lead to improvements in clinical care.

“Psychiatry is behind the rest of medicine when it comes to diagnosing illness,” said Satterthwaite. “For example, when a patient comes in to see a doctor with most problems, in addition to talking to the patient, the physician will recommend lab tests and imaging studies to help diagnose their condition. Right now, that is not how things work in psychiatry. In most cases, all psychiatric diagnoses rely on just talking to the patient. One of the reasons for this is that we don’t understand how abnormalities in the brain lead to psychiatric symptoms. This research effort aims to link mental health issues and their associated brain network abnormalities to psychiatric symptoms using a data-driven approach.”

To uncover the brain networks associated with psychiatric disorders, the team studied a large sample of adolescents and young adults (999 participants, ages 8 to 22). All participants completed both functional MRI scans and a comprehensive evaluation of psychiatric symptoms as part of the Philadelphia Neurodevelopmental Cohort (PNC), an effort lead by Raquel E. Gur, MD, Ph.D., professor of Psychiatry, Neurology, and Radiology, that was funded by the National Institute of Mental Health. The brain and symptom data were then jointly analyzed using a machine learning method called sparse canonical correlation analysis.

This analysis revealed patterns of changes in brain networks that were strongly related to psychiatric symptoms. In particular, the findings highlighted four distinct dimensions of psychopathology—mood, psychosis, fear, and disruptive behavior—all of which were associated with a distinct pattern of abnormal connectivity across the brain.

The researchers found that each brain-guided dimension contained symptoms from several different clinical diagnostic categories. For example, the mood dimension was comprised of symptoms from three categories, e.g. depression (feeling sad), mania (irritability), and obsessive-compulsive disorder (recurrent thoughts of self-harm). Similarly, the disruptive externalizing behavior dimension was driven primarily by symptoms of both Attention Deficit Hyperactivity Disorder(ADHD) and Oppositional Defiant Disorder (ODD), but also included the irritability item from the depression domain. These findings suggest that when both brain and symptomatic data are taken into consideration, psychiatric symptoms do not neatly fall into established categories. Instead, groups of symptoms emerge from diverse clinical domains to form dimensions that are linked to specific patterns of abnormal connectivity in the brain.

“In addition to these specific brain patterns in each dimension, we also found common brain connectivity abnormalities that are shared across dimensions,” said Cedric Xia, a MD-Ph.D. candidate and the paper’s lead author. “Specifically, a pair of brain networks called default mode network and frontal-parietal network, whose connections usually grow apart during brain development, become abnormally integrated in all dimensions.”

These two brain networks have long intrigued psychiatrists and neuroscientists because of their crucial role in complex mental processes such as self-control, memory, and social interactions. The findings in this study support the theory that many types of psychiatric illness are related to abnormalities of brain development.

The team also examined how psychopathology differed across age and sex. They found that patterns associated with both mood and psychosis became significantly more prominent with age. Additionally, brain connectivity patterns linked to mood and fear were both stronger in female participants than males.

“This study shows that we can start to use the brain to guide our understanding of psychiatric disorders in a way that’s fundamentally different than grouping symptoms into clinical diagnostic categories. By moving away from clinical labels developed decades ago, perhaps we can let the biology speak for itself,” said Satterthwaite. “Our ultimate hope is that understanding the biology of mental illnesses will allow us to develop better treatments for our patients.”