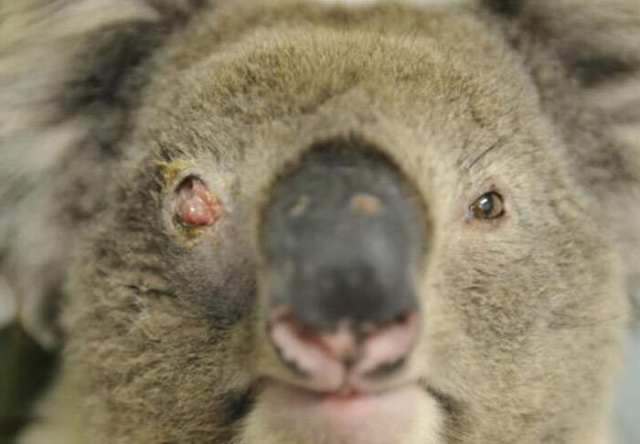 The comedian John Oliver, who made a name for himself as host of an HBO talk show, will now have his name in a slightly more embarrassing locale: outside a koala chlamydia clinic in Australia.

While he is known for clever stunts — Oliver recently published a children’s book about a gay bunny and started a church — his latest prank may have backfired.

After Oliver revealed that he had bought several items from actor Russell Crowe’s divorce auction, Crowe found “a cool way” to honor him. That “cool way” turned out to be a ward at a zoo, now called “The John Oliver Koala Chlamydia Ward.”

We’ll explain: Here’s what you — and John Oliver — need to know about koala chlamydia.

Do koalas really have chlamydia?

Sadly, yes. Some surveys of koala populations in Queensland have suggested at least half of wild koalas are infected with the disease — possibly more.

Chlamydia, a sexually transmitted disease, causes conjunctivitis, which can lead to blindness, urinary-tract infections and infections of the reproductive organs that can lead to female infertility.

Researchers at the University of the Sunshine Coast discovered in April that a retrovirus was further weakening koalas, making them even more susceptible to chlamydia.

It’s not just chlamydia; dogs, loss of habitat, rapid urbanization and deaths from vehicles are also killing koalas. In some parts of Queensland, between 1994 and 2016, the koala population declined 80 percent.

In 2012, the federal government classified koalas as “vulnerable” in the states of New South Wales and Queensland and in the Australian Capital Territory. The Australia Zoo says that 40,000 to 100,000 koalas — a symbol of Australia’s unique wildlife — remain in the wild.

How is the disease transmitted?

Though transmitted through sex, koalas have little time for randy rooting, as the Australians call it, because they sleep about 20 hours a day. There are two main strains of bacteria that lead to chlamydia in the marsupials. The more common strain, Chlamydia pecorum, is responsible for most of the outbreak in Queensland and cannot be transmitted to humans. The second strain, C. pneumoniae, can infect humans if, say, an infected koala were to urinate on someone, though it’s unlikely.

Baby koalas, known as joeys, can also catch the disease from their mothers while nursing if they come into contact with infected feces.

Is there a cure?

For humans, treatment of the disease involves an embarrassing trip to the doctor for antibiotics (and maybe a few angry texts).

Antibiotics are also used to treat koalas, although they do not prevent re-infection and come with a host of unpleasant side effects. Research has shown that the treatment messes with the gut microbes that help them digest their leafy diet — meaning they can starve.

There have been successful trials of a vaccine to prevent infection in both healthy koalas and those in early stages of infection. Some of those experiments have taken place at the wildlife hospital where Oliver’s name now adorns the wall.

And don’t worry, the Australian government isn’t letting Oliver have all the credit: Monday, the New South Wales government announced a 45 million Australian dollar plan to save the state’s koalas. (That’s almost $34 million.)

What did John Oliver actually get?

Apart from his name forever memorialized with the words “koala chlamydia,” a ward in Oliver’s honor was donated at the Australia Zoo Wildlife Hospital in Queensland. The ward will focus on treating and vaccinating koalas in that state.

“Thanks to your auction, you are now saving literally thousands of koala lives,” Bindi Irwin, daughter of conservationist Steve Irwin, who died in 2006, said in a video tweeted out by Crowe.

The reward was all too much for Oliver, who joked Sunday on his show, “Last Week Tonight With John Oliver,” that he was so overcome by the accomplishment that he was done hosting it.

“Don’t think of this as a sad occasion, because I leave you in total triumph …,” he said. “If you’ll excuse me, I’ve got a date with some very contagious koalas.”