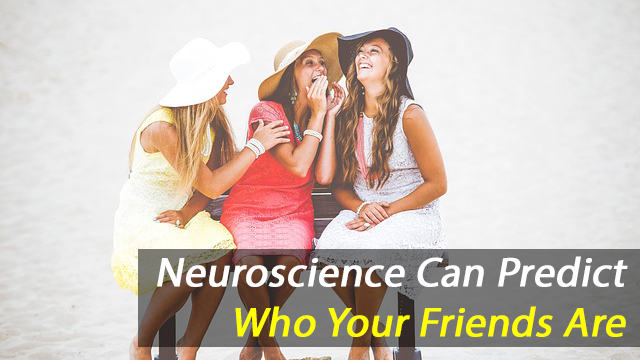 You may perceive the world the way your friends do, according to a Dartmouth study finding that friends have similar neural responses to real-world stimuli and these similarities can be used to predict who your friends are.

Published in Nature Communications, the study is the first of its kind to examine the connections between the neural activity of people within a real-world social network, as they responded to real-world stimuli, which in this case was watching the same set of videos.

“Neural responses to dynamic, naturalistic stimuli, like videos, can give us a window into people’s unconstrained, spontaneous thought processes as they unfold. Our results suggest that friends process the world around them in exceptionally similar ways,” says lead author Carolyn Parkinson, who was a postdoctoral fellow in psychological and brain sciences at Dartmouth at the time of the study and is currently an assistant professor of psychology and director of the Computational Social Neuroscience Lab at the University of California, Los Angeles.

The study analyzed the friendships or social ties within a cohort of nearly 280 graduate students. The researchers estimated the social distance between pairs of individuals based on mutually reported social ties. Forty-two of the students were asked to watch a range of videos while their neural activity was recorded in a functional magnetic resonance imaging (fMRI) scanner. The videos spanned a range of topics and genres, including politics, science, comedy and music videos, for which a range of responses was expected. Each participant watched the same videos in the same order, with the same instructions. The researchers then compared the neural responses pairwise across the set of students to determine if pairs of students who were friends had more similar brain activity than pairs further removed from each other in their social network.

Figure 1 from paper: Social network. The social network of an entire cohort of first-year graduate students was reconstructed based on a survey completed by all students in the cohort (N = 279; 100% response rate). Nodes indicate students; lines indicate mutually reported social ties between them. A subset of students (orange circles; N = 42) participated in the fMRI study. Image by Carolyn Parkinson.

The findings revealed that neural response similarity was strongest among friends, and this pattern appeared to manifest across brain regions involved in emotional responding, directing one’s attention and high-level reasoning. Even when the researchers controlled for variables, including left-handed- or righthandedness, age, gender, ethnicity, and nationality, the similarity in neural activity among friends was still evident. The team also found that fMRI response similarities could be used to predict not only if a pair were friends but also the social distance between the two.

“We are a social species and live our lives connected to everybody else. If we want to understand how the human brain works, then we need to understand how brains work in combination— how minds shape each other,” explains senior author Thalia Wheatley, an associate professor of psychological and brain sciences at Dartmouth, and principal investigator of the Dartmouth Social Systems Laboratory.

For the study, the researchers were building on their earlier work, which found that as soon as you see someone you know, your brain immediately tells you how important or influential they are and the position they hold in your social network.

The research team plans to explore if we naturally gravitate toward people who see the world the same way we do, if we become more similar once we share experiences or if both dynamics reinforce each other.